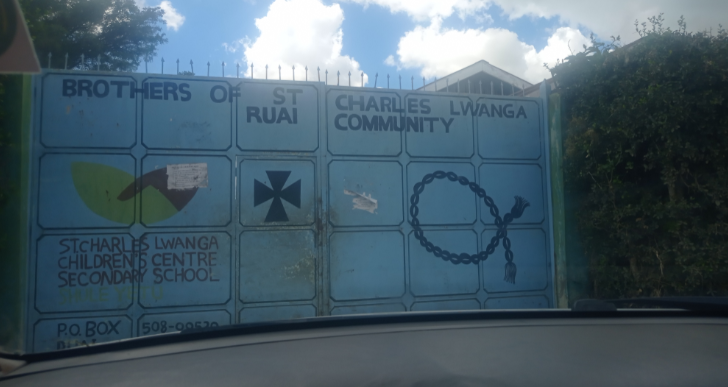 A family in Chokaa, Kasarani constituency wants the Principal of St. Charles Lwanga Secondary School Ruai prosecuted for failing to report a sexual assault case that happened in his school to the police.

It is alleged that the school which is under the leadership of Brothers of St. Charles Lwanga failed to take any action against a student who allegedly defiled a fellow student; Grace Muthoni ,17, on February 27 despite the girl reporting the matter to the administration.

“After reporting the incident to our Principal, the only action he took was to buy me some emergency contraceptive pills instead of taking me for a medical check-up. Nothing happened to the culprit and the principal went ahead to threaten me if other students came to know about it,” said Muthoni.

According to her, on that material date, she was in the dormitory alone when others were out for mass and choir practice since she was not feeling too well. As she was sleeping, a male student was permitted by the dormitory captain nurse her injuries. When he got to her bed, the boy demanded her to have sex with him, and when she resisted, he threatened to rape her.

Fearing for her life, she says she gave in to his demands. The worst thing is that despite her reporting the incident the following day to the principal, no action was taken against the boy.

Muthoni never opened up to anyone else including her guardian due to expulsion threats she received from the principal until April 16 when she found out that she was pregnant. An ectopic pregnancy that had to be terminated on health grounds.

“At home, she started complaining of stomach aches. When we visited a nearby hospital, she was put under urinary tract infection medication but despite taking the medication there was no change. This is when I opted to take her to Mama Lucy Kibaki hospital for further medical examination where her pregnancy status was established,” her guardian Miriam Wambui explained.

The matter has been reported to Ruai police station awaiting action.

Our efforts to talk to the principal were futile as his security men threw us out of the school compound citing that we were strangers and we needed a letter from the Director of Criminal Investigation to talk to him.