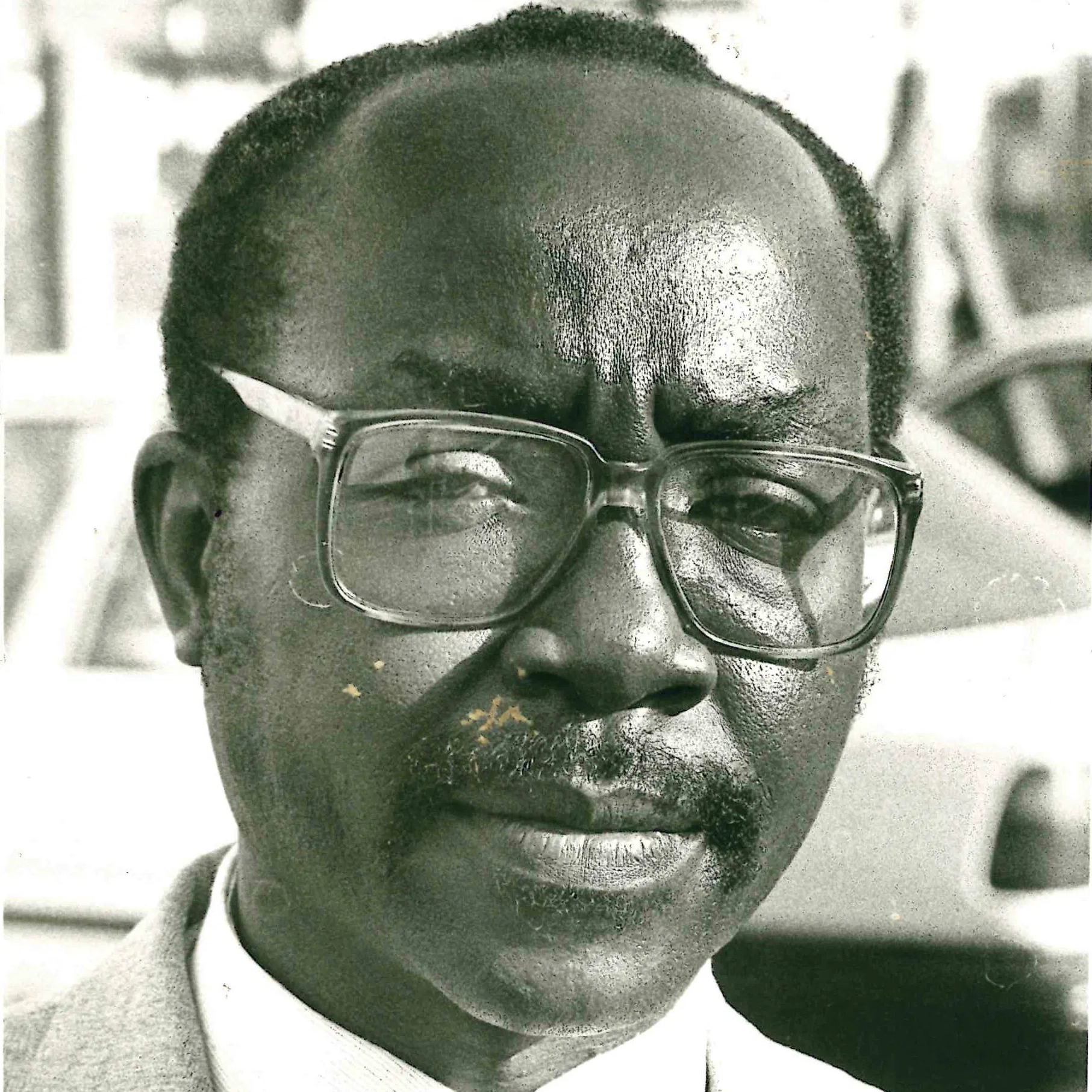 For more than two decades, Wahome Mutahi wrote what was easily the most popular column in Kenya. ‘Whispers’ was a special treat Sunday Nation readers looked forward to every weekend.

One of the most creative writers of our generation, Wahome liberally used his satire. Everybody and everything — including his bald head — was fair game. As he once succinctly put it: “I can laugh at anything except God and disability.”

It, therefore, followed that his immediate family became subjects of his humour. His mother became Apep and his wife was Thatcher.

Then there was his son, Whispers Junior, the “domestic thug”, while his daughters were known as “Pajero” and the “Investment”.

Over the years, his family became part of the bigger family of Sunday Nation readers. Yet what most of his fans thought they knew about the Whispers clan was not necessarily true.

First, the matter of Pajero and the Investment. There is widely held misconception that Pajero represented Mutahi’s daughter Caroline Muthoni while the Investment is her younger sister, Eva Muthoni. 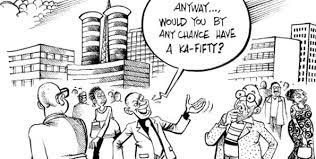 The truth is that Pajero and the Investment are one and same. Eva, the baby of the family, was never introduced to the column.

“It is most likely because the column was started before I was born. I never got around to asking him why I never featured,” says Eva.

In the column, Wahome called himself Whispers, the son of the soil and a proud member of the Nyaituga clan where the menfolk are tough warriors who pay bride price in the form live bees.

Whispers is the long suffering head of a city-based family who is tormented by a son with thuggish ways and the almost permanent lack of money in his life.

Therefore, most readers believed that the Whisper Junior, Patrick Mutahi, and his sisters grew up in Nairobi.

The Whispers ‘clan’ actually grew up in Murang’a and Nyeri.

“Many of Whisper’s fans might find hard to believe this. But I actually only came to live in Nairobi in 1998 when I joined Daystar University,” says Partrick.

Their story unfolds in his house in a neighbourhood his late father might have described as not too upper class and not too middle class.

Present is Caroline, Eva and a few tiny Kenyans we shall talk about later.

The family used to live with their mother, Ricada Njoki, in Murang’a where she worked. The rest of the time they would live with their grandmother in Tetu, Nyeri County.

Occasionally, they would travel to Nairobi for a few days during the holidays, but the routine was that it was their father who visited over weekends.

They have nostalgic memories of growing up in Nyeri. “We had a great time helping out in the shamba. The greatest time was when plums and other fruit were in season. And of course there were the arrow roots,” Caroline recalls. 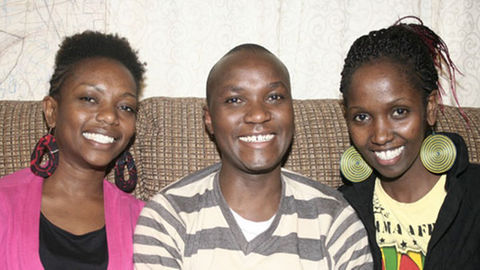 At the mention of arrow roots, there is unrestrained laughter.

Arrow roots, a Gikuyu delicacy, was an integral part of Whispers’ satire. For a fact, most his generation from the “slopes” grew up at a time when arrow roots were part of the local diet.

The Whispers children went to school in Murang’a and Kirinyaga. Patrick and Caroline went to boarding schools for both their primary and secondary education. Eva attended a day school until she joined Form One.

To the family he was ‘Mister’

The family finally got under one roof in Nairobi in 1999 when their mother was transferred from Murang’a to Mbagathi Hospital in the city.

Nobody mentions ‘Dad’. Not this far.

So what did you guys call your father? Silence. Then more laughter.

“For a reason we can’t put our finger on, we never called dad Wahome. When we talked about him amongst ourselves we referred to him as ‘Mister’. So I, for instance, I would ask my brother, where is Mister today?” Caroline explains. In other words, they would be talking of the “man”.

They have fond memories of their residence on Thiong’o road, the last house they occupied with their father before he died in July 2003.

More candid revelations. Wahome had evolved into a household name. People always assumed he had the money to match his fame.

“Wahome did not have money. He was the average father trying to raise his family and experiencing the same challenges that families with average income face. That was our experience. We were never the rich kids down the block.”

There was something about Mutahi and his car they can never forget. For some reason he hated fuelling the car. “He would buy fuel just to take him from the house to town. Many times he would run out of fuel somewhere in between and if he gave you a lift, being seen walking to the petrol station with a jerrican was part of the equation,” recalls Eva.

Something else. Wahome was never a keen motorist. He never ventured outside the city. When he had to travel upcountry, he would get somebody to drive him, a task that often fell on his brother, Richard.

Then there was his driving. I tell them how Wahome would occasionally drop me off at Kencom from the Kenyatta National Theatre and manage to scare me to death despite this short distance.

More laughter and then: “The guy was blind!. He couldn’t see at night. When he wrote that his car knew the way home, he meant it.”

To more serious matters now. Besides working hard to give his children a decent life, he afforded them the best education they could attain. He made it clear that every one of them had to go university.

He did not expect them to have ‘arrow root’ for brains.

He is not around to witness their progress, but he would certainly have been proud of their achievements in the 10 years since he departed.

Patrick went on to graduate with a Bachelor’s degree in journalism from Daystar University. He later proceeded to the University of Witswatersrand for a Masters’ degree in human rights and governance. He is currently a senior programmes officer with Article 19. He also writes commentaries in the local media.

Caroline holds a Bachelor’s degree in journalism from United States International University and an honours degree from the University of Witwatersrand. She has worked for the Standard newspapers as a writer and editor.

She is currently working as a communications officer with Plan International while at the same time pursuing Masters degree at a local university.

Eva is the non-journalist in the family. She holds a Bachelor of Commerce degree from Catholic University. Currently she is a marketer with Kick Start International.

Plus, Eva is the entrepreneur of the family. Besides her regular job, she owns The Party Factory, a company that plans and organises parties for children.

These are not the crazy kids of the ‘Whispers’ column.

“People expect us to be as funny and crazy in line with the characters in ‘Whispers’. In fact Wahome was not funny outside his writing. His humour was only in his column. We are all regular, normal people.”

Even in the absence of the son of the soil, the clan of Nyaituga is quietly expanding.

Patrick is married to Wambui and together they have two children, five-year-old Wahome Mutahi and Megan Njoki aged 18 months.

On to the matter of Pajero, otherwise known as ‘the Investment,’ the girl whose bride price would enable Whispers to own a Pajero and bring beer to irrigate the throats of the Nyaituga clan.

Pajero is still single, but as you read this, her ‘price’ has just gone up. The Nyaituga clan, whose representative in Nairobi is Patrick, still has big dreams about Pajero.

“If you are interested, a Ranger Rover Vogue might help in the way of opening negotiations,” he says.

Eva, on her part, has brought home the goats. She is married to Michael Gitaru. They have a three-year-old daughter, Tendai Nyokabi.

And just what does Mr Gitaru do? “He is a businessman…. he is a hustler,” Eva says and doubles up in laughter. Don’t just buy it when they insist they have no sense of humour.

Today the family will gather in their rural home at Kamakwa, Tetu, to mark the 10th anniversary of Wahome Mutahi’s death.

Even as they remember him, something will be weighing down on the family. Wahome’s untimely departure started when what was supposed to be a minor operation at Thika District Hospital went horribly wrong.

A case of negligence the family filed against the government has dragged on for 10 long years.

“For us it is not so much about the judgment. It is about closure so that we can move on,” says Patrick.