It is with profound sorrow that we inform you of the death of our beloved Professor Joseph Muriuki Wahome of Mississippi Valley State University, a 1995 doctoral graduate of University of California Berkeley, 1987 and 1990 Bachelor and Master of Science graduate of University of Nairobi, respectively. Born and raised in Karatina, Kenya and passed on last week at his home in Mississippi.

He was a father, husband, son, brother, and wonderful teacher, and professor to many. An intellectual powerhouse of our time, our generation has lost one of it’s great minds. We will greatly miss him. Let us keep his family in prayer, and console them.

A team for his funeral arrangements is being put together here and in Kenya, and the family announces that Our Beloved Professor Muruiki Wahome shall be buried in his ancestral home in Karatina, Kenya.

A tribute from the University

A native of Kenya, the 55 years old Wahome will be remembered at MVSU for his love of science and research. 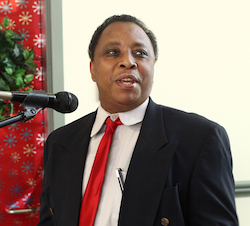 “He was brilliant,” said Dr. Kathie Golden, Wahome’s friend and former colleague. We would banter and argue, but we were never mad with one another. He always promised the take me to Kenya one day.”

“He was an international student, so he had an affinity for it and understood what it meant not to be able to go home for the holidays,” said Golden. He enjoyed helping students perform research, and did all he could to help student-athletes. I’ve never had a student to complain about him.”

Wahome joined MVSU’s faculty in 1995 as an Assistant Professor of Biology.  Prior to that, he was a post-doctoral researcher at the National Park Service’s Golden Gate National Park, Calif.

During his graduate career at the University of California-Berkeley (1990-1995), he served as a graduate student instructor, coordinator of the UC Berkeley Education Abroad International Outreach program and as an assistant in the Education Abroad Office.

During his tenure at MVSU, Wahome held positions with other universities and research organizations. He was a member of the research faculty at the National Marine and Fisheries Science Center in Miami, Fla., a master trainer at the University of Miami and Miami Museum of Science Technology Project, GEMS Associate at the UC Berkeley Lawrence Hall of Science, visiting researcher at Baylor University and associate faculty in the University of Pittsburg Semester at Sea program.

At MVSU, Wahome was engaged in several research projects and held a variety of positions.  From 2000 to 2001 and 2014 to 2015 he was vice-president of the Faculty Senate, and as senate president from 2015 to 2017.  Wahome served as chair of MVSU’s Natural Sciences and Environmental Health Department from 2002 to 2010, during which time he also served as chair of the IRB and Animal Care and Use committee, director of MBRS program, LSMAMP and MBRS Programs.

Wahome was an active researcher, conducting research with both students and faculty that was frequently presented at the Mississippi Academy of Science annual meetings. He published several articles that focus on animal behavior and environmental issues.

Post Views: 467
Spread the love by sharing this post with family and friends
Related Topics:
Up Next

VIDEO: Why Raila’s swearing-in has been called off

‘We had invested…’ Churchill reveals how the pandemic has hit him

Comedian Churchill says just like any other business, coronavirus has hit him too.

Churchill, real name Daniel Ndambuki has been doing ‘The Journey Series’ on his TV show which is originally a stand-up comedy show that attracts thousands of viewers.

“We had invested quite some amount in the production of the show. And now, you can’t use that gear, you have to put all that aside. You cannot set up something so big for like 200 people, that is loss-making. It almost takes us to where we began. We remain positive though”

“I am happy with all that is happening from all other comedians.”

Churchill said this after the launch of TuKo App, which he is the brand ambassador.

Corazon lashes out at body shammers after attending event at Movenpick

The hotel partnered with Hennessy to celebrate the close of the year 2020 as well as usher in the forthcoming festive season.

Mama and Baba Taiyari attended the event and even posted photos about it on their social media.

As usual trolls had something to say about Corazon’s body.

She did not spare them one bit.

The gorgeous media personality’s secret is out after a photo of her with her bae having a lunch date with comedian Teacher Wanjiku emerged online.

Lunch with the birthday girl @teacherwanjiku

On the other hand, Teacher Wanjiku wrote;

His name is Isaac Ng’ang’a and comes from Gathiga, Kabete.

Check out his photos;

‘We had invested…’ Churchill reveals how the pandemic has hit him

Corazon lashes out at body shammers after attending event at Movenpick

Meru bishop likely to be buried after 15 years