[WATCH VIDEO AT THE END OF STORY]

Television talk-show host Jeff Koinange has revealed the finer details of his unceremonious sacking from CNN 10 years ago, where he had worked for many years a reporter.

Through a series on Hot 96 FM ‘A Story a Day’, Jeff has confessed that at the peak of his career at CNN, his boss at the global news network fired him on phone in May 2007 as he drove on the highway.

“My boss called me and asked me to pull off the highway and he said, ‘Listen man, there is too much crap, too many rumours and Nigerians think you stage-managed that story. I don’t think we can sustain you any longer, we will need to let you go’,” Jeff says his boss told him.

Jeff had in early 2007 done the Niger Delta story, which became a hit globally, for its interviews with rebels who had kept even government security at bay.

“It was an amazing story and if I were to do it again I wouldn’t change a thing,” Jeff says, defending the story, 10 years later. “I had researched for the story for more than a year gotten in touch with the rebels down there and they gave us permission. We flew down there and we went deep into the swamp to interview MEND with no security.”

In his report, Koinange accompanied masked MEND (Movement for the Emanicipation of the Niger Delta) guerillas to a camp where they were holding a number of Filipino hostages. Koinange was reprimanded by the government of Nigeria for his coverage MEND, saying the report was “staged”, a charge CNN denied. 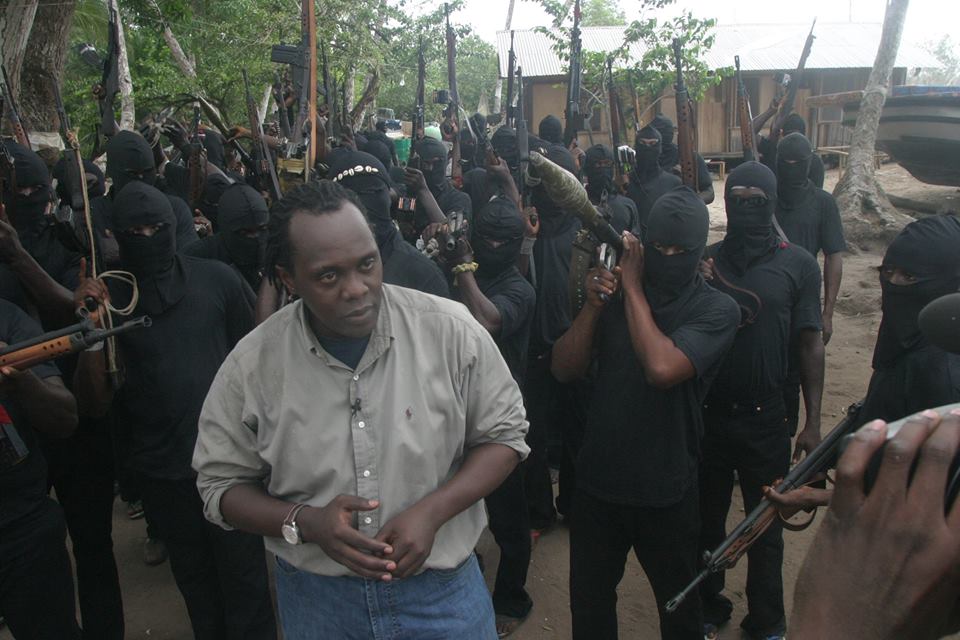 Jeff Koinange photographed with MEND rebels in 2007. He still stands by the story but the Nigerian government said it was stage-managed.

Some of the big stories Koinange had covered for CNN in Africa were the crisis in Darfur, the civil wars in Liberia and Sierra Leone and the famine in Niger, for which he won an Emmy award. Koinange has also covered news outside of Africa, including extensive reporting on the aftermath of the Hurricane Katrina crisis as well as the Iraq War.

On May 29, 2007, CNN announced that Koinange was no longer employed by the network.

Jeff, who doubles as TV and radio presenter for Royal Media Services, noted that the sack was a big blow to his career as he had a baby coming in two months at the time.

“But he (his boss in the highway phone call) said, don’t worry, we will pay you for the rest of your contract so you will be sorted but we just want to sever this relationship,” Jeff narrated.

READ ALSO:   Collymore continues to inspire many, one year after his death

Jeff says CNN management did not bother to investigate the allegations that led to his firing. Koinange revealed that the rape allegations against him were made by a female acquaintance, with whom he had only communicated via email.

“There were rumours that there was a woman in Europe who was in touch with me who wanted me to connect her with Oprah Winfrey to promote a book she had been working on. I told her Oprah is not that type of friend I just introduce anyone to, but she kept pushing and pushing,” he stated.

“She became a stalker threatening me through the mail. One day she wrote a story on her blog that I had attempted to rape her. The rumours got to my boss who ended up firing me,” he added.

The woman accused JK of date-raping her after a long intimate relationship.  It was alleged that Jeff went to interview the lady and the relationship turned intimate. The women posted what she claimed were intimate conversations with Koinage online.

Watch part one of the video as Jalas opens up about his ‘baby.’

VIDEO: Why Raila’s swearing-in has been called off

Kenyans abroad: Why some won’t go home for Christmas

A South African woman identified as Nikita has won the admiration of many for publicly speaking about her journey with HIV/Aids.

I grew up in a orphanage, I was conceived via rape,I got diagnosed at 18 with a CD4 of below 100.

In another tweet Niqita said she was once sexually once abused while expectant by someone who should have protected her.

‘Ever had to be sexually abused while pregnant simply because you needed accommodation yep that was me. It made my strong.’

Describing herself, the mother of three said that HIV does not define her.

In the recent past more and more people are sharing their HIV stories. Among the most public cases are Asumpta Wagura, the late Binyavanga Wainaina,Phenny Awiti and Doreen Moraa.

Phenny Awiti was born with the virus but only found out when she was in high school.

Doreen Moraa has been living with the disease for 20 years.

If you are an IT enthusiast or you are someone who want to make a career change, there is a wide range of cutting edge technologies in the tech industry right now, that you can train on to become a highly paid consultant.

One of those technologies is Robotics Process Automation (RPA). This is a relatively new technology that is blowing up right now! There is so much demand by companies to automate business processes and yet not many people have the skills needed to implement such a complex project.

In this episode of Success With Bob Mwiti Show, I breakdown the top RPA tools that you can train on, to become a highly paid consultant. If you like my work, kindly subscribe to my YouTube channel.

I have not left my wife: Ex-president Jakaya Kikwete

Former Tanzanian President Jakaya Kikwete has denied allegations that he has parted way with his wife Salma. Addressing a Chama Cha Mapenduzi (CCM) rally in Arusha on September 9 ahead of the October 28 General Elections, Mr Kiwete sought to put to rest the rumours propagated on social media.

“Should I, or should I not say?” Mr Kikwete posed to the crowd which cheered him on.

“I’ve heard that people were saying that ‘this lady has been dumped and that’s why she wants to become a Member of Parliament’. Do you want to take my wife from me? I have not left her,” said a laughing Mr Kiwete.

Mama Salma, as she’s popularly referred to by Tanzanians made history in 2017 after becoming the first former first lady to become MP after being nominated by President John Magufuli. Mrs Kikwete’s nomination was, however, viewed as a move to reach out to politicians with a big influence within CCM, as they were seen to be drifting away from the president.

After Mr Kikwete stepped down in 2015 after serving 10 years as president as per the constitution limit, Mrs Kikwete vigorously campaigned for Mr Bernard Membe, a close family friend to clinch the CCM seat and succeed her husband.

READ ALSO:   FULL INTERVIEW: Waiguru says this when asked of the last time she spoke to Uhuru

Soon after clinching the seat, rumours started swirling that President Magufuli’s crackdown on tax evasion at the Port of Dar es Salaam put him at odds with the Kikwete family as firms they were in business with were under investigation.

However, Mr Kikwete and President Magufuli both dismissed the allegations as a mudslinging campaign.

During her tenure as First Lady, Mama Salma was hailed for being at the forefront of empowering women. She founded the Wanawake na Maendeleo (Wama), a non-profit dealing with women empowerment. She also founded Wama Secondary School, an institution that enrols bright but disadvantaged girls.

Sakaja reveals how he owned Mercedes Benz in campus

Ledama Ole Kina insists on legalization of marijuana in Kenya

I was violently mugged at a well-lit street in Nairobi