Neil Armstrong’s iconic photograph of fellow astronaut Buzz Aldrin standing on the surface of the moon has always been the epitome of iconic moments in space photography.

However, thanks to SpaceX visionary Elon Musk, there’s a new image burned into our brains: A spacesuit-clad mannequin in the driver’s seat of a red Tesla Roadster.

On Tuesday, SpaceX launched the Falcon Heavy rocket from the Kennedy Space Center at Cape Canaveral, Fla., on a mission to loop around the sun for hundreds of millions of years.

While Falcon Heavy blasting off into space served as another reminder of the wonders of space travel, the indelible image of this voyage is “Starman,” the mannequin sitting inside the Tesla.

Here’s everything you need to know about Starman:

Why is it (and the Roadster) on this rocket?

According to Elon Musk, the CEO of Tesla and SpaceX (and potentially a real-world Tony Stark in the making), test flights often include mass simulators involving concrete or steel blocks.

Of course, that’s not good enough for Musk, which is why we see Starman in a Roadster, playing David Bowie’s Space Oddity.

“That seemed extremely boring,” said Musk of settling for concrete or steel blocks. “Of course, anything boring is terrible, especially companies, so we decided to send something unusual, something that made us feel.”

In a press call following Falcon Heavy’s launch, Musk noted the sleek spacesuit is fully functioning. According to a report from TechCrunch, Musk said the biggest challenge was creating a suit that can handle the rigors of space travel yet still look fashionable.

“I mean, it’s a dangerous trip, you want to look good,” Musk said.

The other benefit: testing the suit in specific conditions — say, traveling in a Tesla on a rocket ship orbiting the sun — would help SpaceX move closer to rocket launches with human crews. 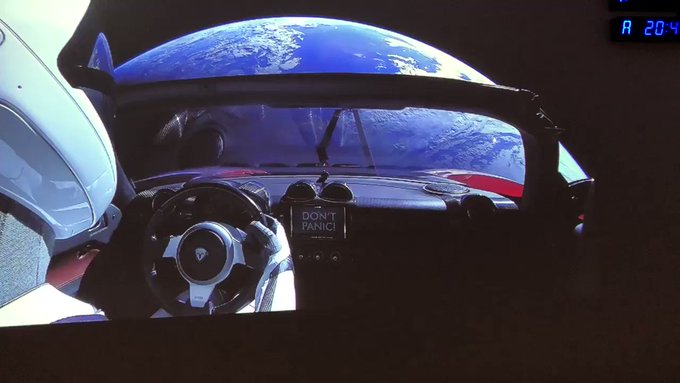 View from SpaceX Launch Control. Apparently, there is a car in orbit around Earth.

If you want a glimpse of the journey, SpaceX is streaming it online, with multiple live views of Starman’s adventure.

The launch itself was remarkable because of the reusable rockets

The Heavy’s two side boosters, which each had launched missions in 2016, successfully flew back to Cape Canaveral Air Force Station, deployed legs and landed on twin pads.

‘Tell my family I am sorry,’ Last text by Basalirwa before committing suicide

Arthur Basalirwa, a Makerere University Business School (MUBS) graduate left behind a message for his family before he allegedly committed suicide.

He had recently graduated with a first-class degree and had just gotten a job.

According to a social media user, Basalirwa is son to Doris Elizabeth Nansamba a journalist working with Capital/ Beat FM.

It is alleged that his long-time partner *D turned him down.

In a post to his family, Basalirwa penned his last message to them,

‘Just make sure you tell my family it’s Okay. I am sorry but it’s too late I am sorry. Too much weighing on me.

I don’t want to live and see another day. I’m sorry but I cant stay I’m sorry too much weighing on me.’

In a screenshot of texts between him and D, Basalirwa had called her out for being rude to him to an extent of asking him to block her.

‘You will always ask yourself if you had sent me a more meaningful text. These are your last words to me. Goodbye D.’

To which D responded

‘F@ck you, just block me and never text me. Delete our chats and my number. Bye’

‘Atleast in my dreams, we still sit across each other…’ Wambui Collymore to Bob

Wambui Kamiru, the widow of Safaricom CEO Bob Collymore is yet to come to terms with his loss.

The mother of two has been penning touching messages to her late husband, who succumbed to acute myeloid leukemia cancer in June 2019.

Wambui, an installation artist, reminisces about the good times she shared with the love of her life before he passed.

Her posts usually have the hashtag #NotesOnAbsence.

At least in my dreams, we still sit across each other at dinner parties. #NotesOnAbsence,’ read one of her posts.

Collymore and Wambui were a perfect match and couple goals to many.

To walk around with the ever present knowledge that something is missing.
Not misplaced.
Not lost.
But missing.

Wambui is still grieving just like many do and while expressing her sadness, she wrote,

To whom do these tears belong?
Why does my laughter have no recollection of the depth of my sadness?

And yet I owe my joy to its cousin.

‘Tell my family I am sorry,’ Last text by Basalirwa before committing suicide

‘Atleast in my dreams, we still sit across each other…’ Wambui Collymore to Bob