Award-winning actress Nyce Wanjeri popularly known as Shiro of Auntie Boss has called it a day at the show.

This comes barely a week after she won the Best Actress in a comedy and TV series at this year’s Africa Magic Viewers’ Choice Awards (AMVCA).

Now, for 15 seasons, that is almost 200 episodes on NTV, auntie boss has been my home. I have been humbled to work with an amazing production house that is moonbeam and their very abled selection of cast and crew. I have been blessed and lucky so far, but that beautiful journey that started 3 or so years ago is soon coming to an end.

This coming Tuesday, the 18th of September, will have me on my last fresh episode of Auntie Boss on NTV, lakini repeats zitakuwa Maisha Magic bado.

I won’t pretend to not be a little bit sad because Shiro is a character I had personally fallen in love with. 😢 She was a dear to many Kenyans and the amazing time I’ve spent on set watching the amazing actors and actresses grow are moments I am going to treasure forever!

But whatever has a beginning must have an end, and so this chapter of Shiro must come to an end to make way for something else, somewhere else. I promised that I’ll keep entertaining till I have no strength left in me so I will continue in one way or another.

We can only thank God that this is happening while we are at the top, with wins and nominations and continental recognition for myself and also the show Auntie Boss na sio kuchoka mmechoka na sisi. 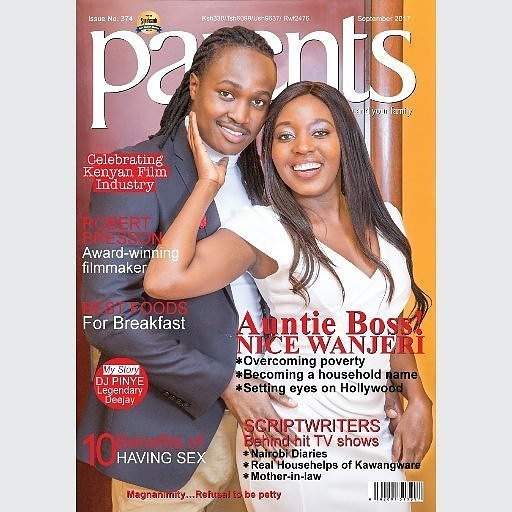 Also, it will not only be my last episode on the show, but the last time you the fans will interact with me as Shiro.

Since I am no longer under the show and the production company that owns the show and the character shiro, I am required to no longer appear or engage as Sshiro. I know I have no control over the millions of fans of the show referring to me as Shiro Warugongo on social media or on the streets, sitalenga, nitaitika na selfie tutapiga. All I am trying to say is I no longer represent the company or the show or the character Shiro, so anything I do or say is for Nyce Wanjeri

DJ Stylez speaks a year after his sister’s death

‘I dated a violent married politician,’ Karen Nyamu on why she will never get married

Politician and Lawyer Karen Nyamu says she dated a violent politician who changed her mind to ever get married.

Speaking during an interview with Massawe Japanni on Radio Jambo, Karen said she dated the married politician for two years.

Karen was working in his company then.

I  love having children and getting a family is a good thing but I have made the decision based on my past experience. There was insecurity and obsessiveness

“I am not interested in getting married after my past experience with a man who turned out to be very violent. I was in my early 20’s and he was in government.”

Karen who vied for Nairobi Women representative position in 2017, said the politician was also very protective and she felt very insecure with men.

Asked on whether she reported the matter to the police, Karen said;

“I was very young and the guy was famous. I felt very intimidated that even if I report nothing would be done to him and so I did not report. I thank God I left the relationship.”

Karen, however, said that she is looking forward to getting three kids.

Legendary Vioja Mahakamani actress Lucy Wangui has shown that age is nothing but a number after a video of her doing a dance challenge was posted on TikTok.

In the video posted on Facebook by Switch TV, Wangui is seen dressed in a long yellow dress and moving swiftly while enjoying the beata of a song.

See the video below:

The official song video shows the handsome artist trying different dance styles trying to symbolize the message in his sing, and TikTok users are all out to pull the same dance styles.

The video of the veteran actress feeling herself while enjoying he dance moves was also posted on TUKO.co.ke‘s Instagram page:

She is among the few Kenyan celebrities who have publicly jumped on the dance challenge and managed to not only make it fun but also do it better.

She received lots of love and thumbs up for her mastery in moving with the beat despite her age especially with how modern her dances move were.

The award winning actress has created a path that fans can hope will inspire other creatives, especially the ones she works with in the local court room show, to pick up the dance challenge and get to show their moves.

TV personality Jeff Koinange has turned 55 years today. The JKL show host has been praised by many celebrities among them his colleagues at Citizen TV.

Annitah Raey described him as a power house;

Happy birthday to my big brother and friend @koinangejeff thank you for being true and real through the years!!! OH MY!!!!!!!!!!!! SMMOOOOOOOOOKING!!!

Jeff is a news anchor and talk show host at Citizen TV. Previously, he was working for KTN and before that, he was an employee at CNN.

Man drafts own eulogy ‘because he knows self better’

‘I dated a violent married politician,’ Karen Nyamu on why she will never get married

VIDEO: Rev Natasha finally falls in love with a non Kenyan man, announces she is getting married soon

‘Christmas will never be the same again!’ Newlyweds Tokodi and Grace Ekirapa reveal