Classic 105 radio presenter Maina Kageni has revealed that he’s not planning to marry any time soon despite the pressure piling up on him.

Maina recently responded to Mwalimu King’ang’i on their morning show at Classic 105 on when he’ll get married, saying he doesn’t plan to do it at all.

Mwalimu told him that he shouldn’t judge married men because they go through a lot something that Maina can never understand because he has never been in that position.

In response, Maina, who is approaching his 50s now, shared that he doesn’t want to be married because of all those shocking stories that men go through.

“From what you keep telling me do you think I will get married? I see the hell you are all going through. One of these days we should actually discuss what the real importance of marriage is.” he shared.

Who is maina Kageni? This is a question highly unlikely to come out of any avid Kenyan with a radio, he is without a doubt one of Kenya’s leading personalities in the radio industry.

Maina Kageni together with the humorous Mwalimu King’ang’i have captured Kenyans hearts and ears with their breakfast show ‘Maina and King’ang’i in the morning’, playing out in most matatus and private vehicles ferrying people to work and their various activities.

Maina Kageni rose from the ranks and established himself as an entertainment guru uniquely possessing the ability to charm the ladies with his sensitive approach to gender issues.

He is also widely known for sharing relationship tips with his male counterparts.

This article will share with you Maina Kageni’s photos in and out of studio as well as some interesting facts that you may not have known.

Check it out and get to know Kenya’s top radio personality! 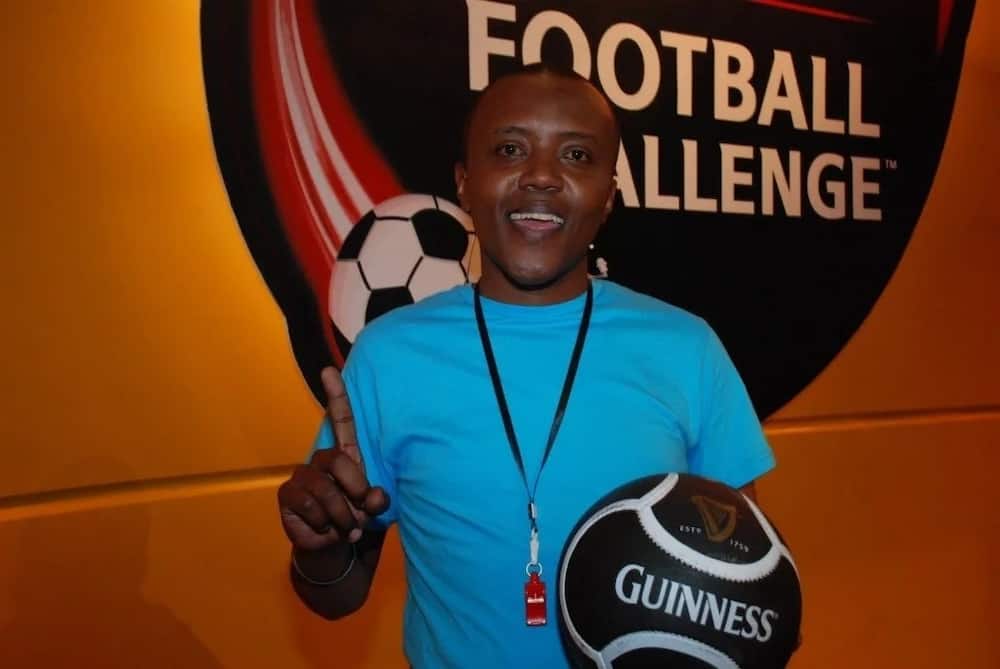 Loved by women and envied by men, Maina Kageni is a household name thanks to his gift of the gab and has managed to reap big bucks out of this extraordinary talent.

How much is Maina Kageni worth exactly?

A question that is rather intriguing and is most likely to leave most peoples mouth agape as the Classic 105 host is rumoured to take home roughly KSh2 million a month, a colossal amount by any given standard.

And it doesn’t end there, Maina is a shrewd business man with global investments worldwide.

Maina loves to dabble in real estate and has property in Kenya and overseas in big cities like Miami, Florida and Lagos, worth millions of shillings.

Not much is known about Maina Kageni’s personal life and as much as he is outspoken on radio he ironically does not reveal much about himself regarding personal relationships.

What is known is that he is currently single and yet to marry.

The Manchester united fan loves to spoil himself to the best of German machines and his list of flashy cars validates his obsession with big boy toys.

Take a look at some of Maina Kageni’s sleek cars from his jaw dropping collection; 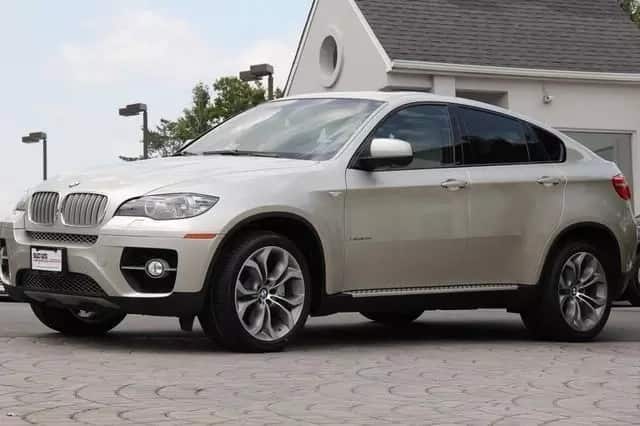 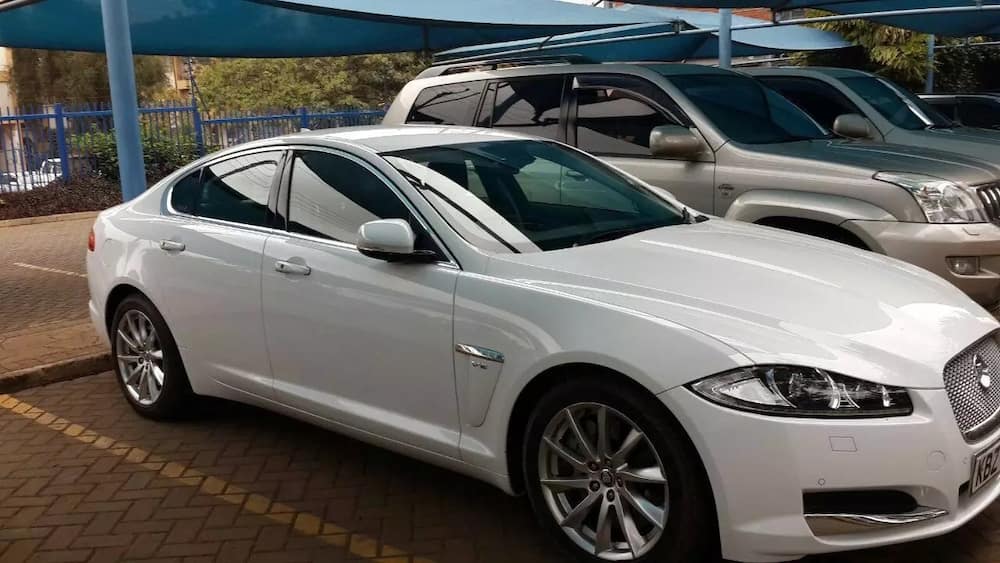 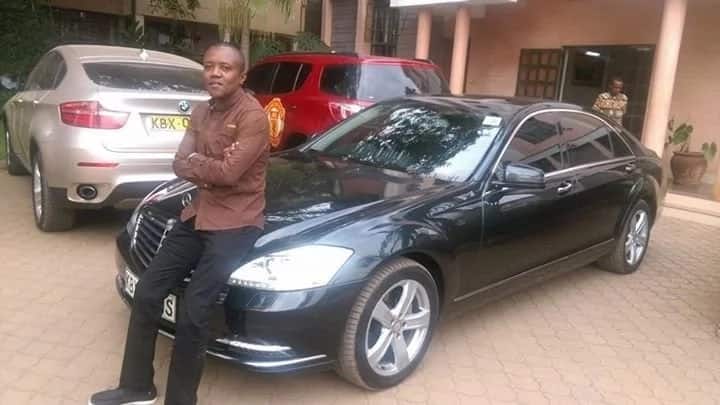 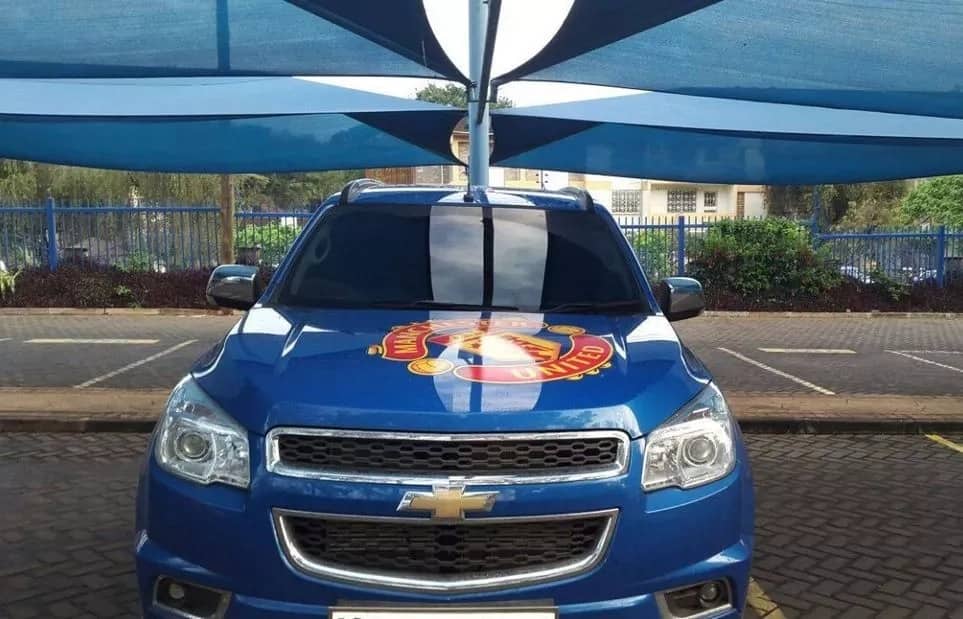 Although he depicts a vibrant and youthful man in his shows, Maina is not as young as most would think, you would likely be amazed to know that he is 43 years old!

Maina doesn’t seem fazed by his age as his versatility and skills in the media industry seem to mature over the years like fine wine. 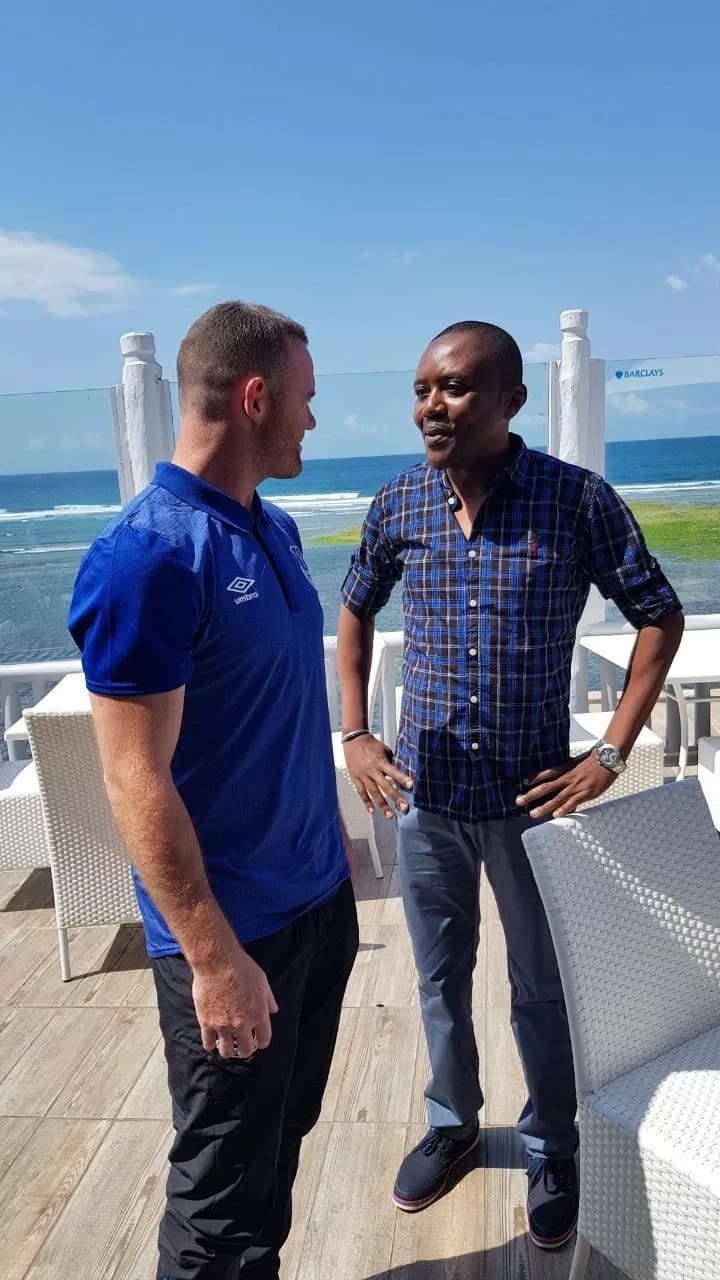 Maina Kageni’s residence falls nothing short of his personality with the radio host boasting a stunning multi-million house situated in the serene leafy suburbs of Karen.

The area is known to be the residence of Kenya’s crème de la crème.

These unconfirmed rumors and notions may be rooted in the fact that Maina has remained unmarried despite his wealth and age. 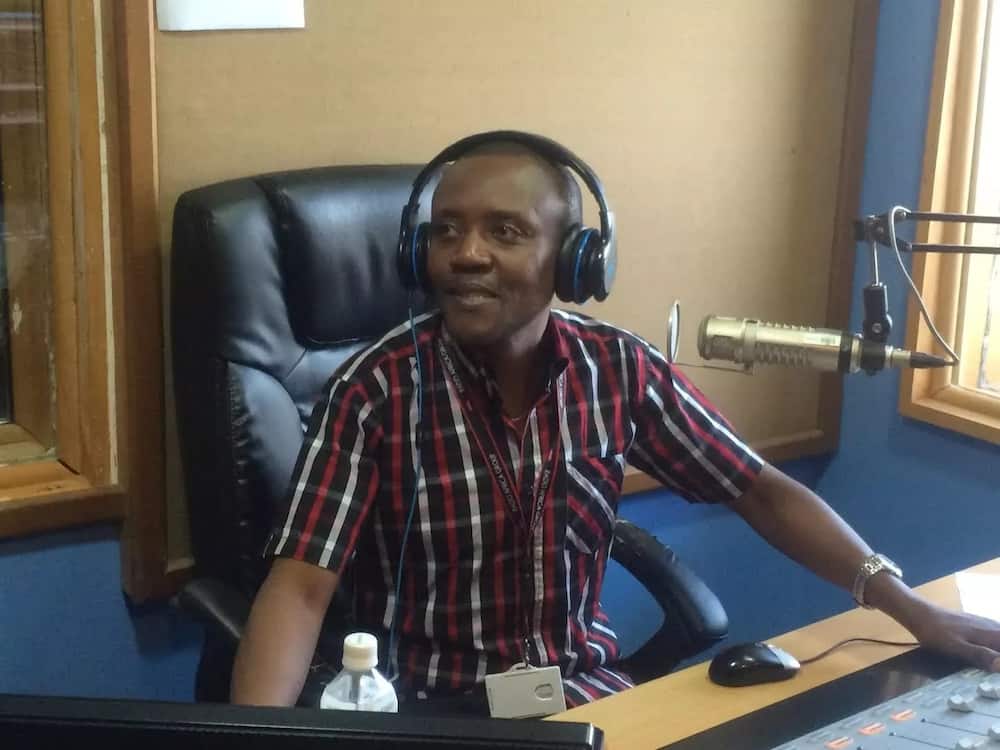 In a typical African traditional setting this behavior may be viewed as strange because it goes against the norms and culture that expects men to marry at a certain age and status.

READ ALSO:   Maina Kageni: Why I begged Sanaipei Tande to have my baby

An inspiration to many and villain to some, it suffices to say that Maina Kageni’s impact in the Kenyan media industry is a fete that few have accomplished, hence the great admiration and respect showered upon him as one of Kenya’s finest radio hosts.

When online Mafisi crush on your spouse

Kenyan singer Otile Brown has warned his loyal fans to be wary of Facebook operating using his name.

The singer put out the message through his official Instagram account after a few of his fans claimed that he had defrauded them of their hard-earned money with fake promises.

Over the past few years, there has been a surge of con artists who scam crazy fans of their money using celebrities names mostly on Facebook.

They ask for money in exchange for certain services, i.e. business cash boosts or fake gifts.

Otille Brown informed his fans that he does not have a Facebook account as his was hacked a few years ago.

He said that he is trying hard to get it back and would inform his fans through his Instagram account once he does.

“I repeat, I do not have a facebook account at the moment, if I manage to get mine back I will inform you all from this account,” he wrote.

Otille Brown went on to make it clear that he does not and has never asked for cash directly through any of his social media accounts.

Otille appreciated the love of his fans; however, he asked them to be smart while dealing with netizens.

“Please don’t be conned, OB does not ask for money from fans. Please be smart.”

He further urged anyone who has been approached by a celebrity like him to first ask for a video call before sending any cash.

In regards to the extortion done under his name, Otille Brown identified three men who his team has managed to track down and promised that he will do his best to bring them to justice.

“These are the three conmen, they are a team working together. Chuma chenu ki motoni. We are working too,” wrote Otille Brown followed by a list of three names and phone numbers of the alleged conmen.

Many questions have been going around regarding socialite Amber Ray’s relationship with her ex singer Brown Mauzo ever since he moved on and started dating Vera Sidika.

The two were spotted in a romantic getaway just two months ago at the Coast before they quietly ended their relationship and moved on.

They paraded they young love on social media with Amber Ray saying that she had found both friendship and love in Brown Mauzo.

“Imagine finding both love and friendship in one person,” wrote Amber Ray on an Instagram post of the two lovebirds enjoying a drink by the beach.

During a Q & A Instagram session, one of her curious fans asked the socialite what happened to which she bluntly replied, life happens.

She went on to add that she is currently happy in her life, which Brown Mauzo is too.

“Life happens. He is happy, I am happy.” wrote Amber Ray.

In another one of her posts, the young single socialite disclosed that she is finally ready to settle down and that she is just waiting for the right man to come her way.

“I think I’m ready to f** the same guy in different hotels in different countries for the rest of my life,”  wrote Amber Ray.

A Chinese woman has made headlines after bringing 23 members of her family on a blind date to test her lover’s generosity.

According to the Daily Mail Online, the unknown woman tagged along with her large clan to the romantic occasion without informing her date in advance.

After enjoying the meal, the man decided to teach the woman a lesson and fled away after receiving the bill which amounted to KSh 382,000 ( £2,300).

According to a Chinese newspaper, Taizhou Evening News, the anonymous woman went on a blind date with a 29-year-old man identified as Liu in eastern Chinese province of Zhejiang.

Reports indicate that the date was organised by Liu’s mom who was worried about her son who had been single for long.

The man had offered to pay for the meal with the thought that it would be a romantic dinner for two but shock on him.

Speaking to the media, the woman said she wanted to test her potential boyfriend’s generosity in catering for the large crowd of 25.

According to reports, the lady and her family enjoyed expensive dishes and alcohol.

Interestingly, Liu failed the test and his potential date ended up paying for the meal herself.

It was later agreed that the man pays for a small part of the meal and the remainder of the bill be shared among the woman’s 23 family members.

In other news, TUKO.co.ke reported of one bride who has since gone viral after she took to social media to convince her friends and family to fund her special day.

According to the post on Reddit, the bride wants a huge amount of moneythat will enable her and her fiance’ to tour Europe for a one month honeymoon.

According to the post, the couple will be tying the knot in December and the bride hopes the guests will not change their mind due to coronavirus.

“Hope you all are doing great and getting all of you all wedding gifts (haha) prepare your cold hard cash and your large housewarming gifts…We really cannot wait to see you all (and receive your gifts LOL) this December,” read the post.

The bride advised her friends against pulling out due to COVID-19 saying they have a monetary goal of KSh 2.2 million ($20,000) minimum.

Alarm as more children are caught up in deadly lovers’ tiffs

I bought a car from an online bazaar, but it ended in tears