US Ambassador Kyle McCater on Thursday took a swipe at Kenyan leaders attending the national prayer breakfast, claiming they were praying for forgiveness after stealing public funds.

He added a satirical twist by suggesting that resorting to prayer would ‘take the nation to the path of prosperity’.

He attached a video of President Uhuru Kenyatta dancing to a Maasai gospel song and expressed hope that the prayers were a good start for the country’s path to prosperity.

“What a good start to take the nation on the path of prosperity the wananchi deserve. We must all do our part. #stopthesethieves,” he added. 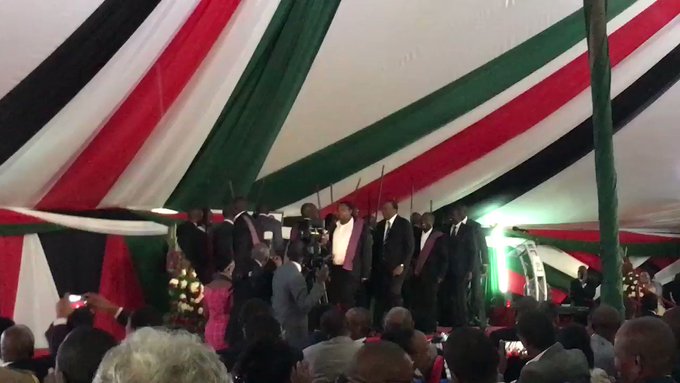 Kenyan leaders are praying and asking for forgiveness for the sin of thievery at the 17th annual National Prayer Breakfast. What a good start to take the nation on the path of prosperity the wananchi deserve. We must all do our part. #stopthesethieves

Probed to clarify on the tweet, McCater said he was just celebrating every effort to curb thievery.

Kenyans on Twitter had mixed reactions to the ambassador’s thoughts on the national prayer breakfast.

“Yes Mr @USAmbKenya Kenyan leaders really need to seek forgiveness from God and just as the Bible said to zacheaus, let them repay any cent they stole or was stolen under their watch, that way they will attain true forgiveness from God. This is a good start,” wrote Wainaina Njenga.

“Ambassador I hope you’re engaging the power of sarcasm. Career thieves need no prayers. Their prayers are a mockery to the nation and God. Before prayer, during prayer, after prayer, these folks will remain the same. No business conducting this prayer ritual every year. Bure!” Chrisogonas Odhiambo commented.

“In this atmosphere we must celebrate every effort to recognize and take on thievery,” McCater replied.

“I’m an American living in Kenya too, and am disappointed in your statement. I would hope for a more useful analysis and engagement on this topic that is costing Kenyans dearly. So my Kenyan taxes get misappropriated, then my American taxes go to palliative statements about it?,” commented Rafe Mazer.

“Sir, this was a tweet, not a full position paper on dealing with thievery & I think you know this,” McCater replied.

“Please, with all due respect, if you got nothing to tweet just don’t! We know what we are going through because of those ‘praying’ people!” wrote Margaret Kamau.

“What a good start?? They have been doing the same thing at safari park for over a decade. Have they changed? Nooo. But this tweet of yours I’m sure is sarcasm,” stated Eusebias Makunda.

The DP was forced to pause his speech after the delegates started booing him after he appeared to express his dissatisfaction at the Youth leader Trans Nzoia County Alex Matere’s remarks about his wheelbarrow donations.

Ruto said by saying that Kenyans should not adopt 16th-century technology, Matere was referring to the wheelbarrows he has been supplying to Kenyans.

However, Ruto noted that the discussions Kenyans should have is why a 16th-century tool has millions of citizens still dependent on it in the 21st-century.

The DP’s remarks didn’t sit well with most of the delegates, which resulted in them openly expressing their displeasure and forcing him to stop talking.

He went on to ask for a minute to conclude his speech but the crowd couldn’t hear of it as they continued to jeer him after he appeared to hit out at the former Vice President Kalonzo Musyoka.

READ ALSO:   How US envoy boosts rural economies in his second home

Ruto concluded his speech by calling on leaders to refrain from contests pitting the rich and the poor by quoting former US President Abraham Lincoln.

DP Ruto then proceeded to welcome his boss President Uhuru Kenyatta to make his remarks with the delegates still shouting “respect the president,” as he took his seat.

Former Prime Minister Raila Odinga also hit on the DP for engaging in early campaigns instead of supporting the President in delivering the Big-4 Agenda.

Raila said that Kenyans expect to be united for now but not campaigns of who will be the President in 2022 as they will handle that when the time comes.

The ODM Party leader noted that Ruto and President Uhuru Kenyatta should be working as a pair to bring a difference in the country.

Uhuru maintains Raila is not government

President Uhuru Kenyatta on Monday 26 October 2020 made it clear that Orange Democratic Movement (ODM) party leader Raila Odinga is not in the government.

Speaking at the Bomas of Kenya during the launch of the Building Bridges Initiative (BBI) report, the Head of State explained that when he decided to come into an agreement with Raila, the mission was to find a way to healing this country.

He mentioned that the two agreed to come together with a common agenda of ensuring that what the people of Kenyan have witnessed in 1992, 2005, 2007, and 2017 Kenyans shall never witness again.

He went on to make it clear that Raila Odinga never made any demands from the government.

READ ALSO:   How US envoy boosts rural economies in his second home

The President pointed out that Raila Odinga asked for the two opposing sides to come together and fix what has been ailing the country.

He explained that this would allow the country in the future to be able to compete without the need for the innocent Kenyans blood being shed.

He went on to that the ODM leader for showing his patriotism and looking for a solution because he did not have to do it.

Uhuru also gave special thanks to his Deputy William Ruto for being part and parcel of the handshake and making the BBI report.

He revealed the three agreed that they would never talk about elective posts as they aimed to unite Kenyans.

Maureen and her baby daddy Frankie have been on each others neck with Frankie claiming the YouTuber denies him a chance to see his kids.

In her defence, Waititu claimed that Frankie does not support their two kids.

Kwamboma also jumped in and joined in the drama.

She blasted Waititu for insulting her baby because she got him with Frankie.

According to the curvy lawyer, having a baby with Waitutu’s ex is not reason enough for her to insult a young child.

“Only a sick person can insult a baby calling him a name so despicable I can’t even talk just because I had him with their ex.”

Corazon and Frankie started dating shortly after he broke up with Maureen Waititu.

They got their first child months ago.

Kwamboka further accused Waititu of always driving to her house at midnight.

According to Corazon, she was scared since she had not invited Waititu to her place.

Waititu’s behaviour forced Corazon to move out of her house to somewhere she felt safe.

“One day i’ll open my mouth. drove me out of my own house out of fear. I had to leave a house I bought with my own sweat to go into hiding because sister was driving to my house at midnight trying to I don’t know to do what to me!” she said.

The curvaceous lawyer also urged Maureen to live her life and avoid living for others.

“Don’t live for the cheers, you won’t die by their boos. People get too invested in other people’s lives like it pays,” she said.

Uhuru maintains Raila is not government

70-year-old man chops off his private parts over infidelity