Norah was the 4th best student nationally in 2013 and was admitted in the School of Engineering.
Police confirmed the death Friday afternoon, noting that there is “no ongoing safety threat to the campus community.” The cause and date of the student’s death remain unknown.

Stanford Police spokesperson Bill Larson said he was unable to provide further details regarding the death. The Daily has reached out to the Santa Clara Medical Examiner-Coroner’s Office for comment.

Friday’s death is the fourth student death announced by Stanford since February. Master’s student and world-champion cyclist Kelly Catlin died in March after struggling with depression. Her death came just one month after another graduate student was found dead in a campus laboratory.

Later in March, Mischa Nee ’20 died in a hiking accident after becoming separated from a group of other Stanford undergraduates in Mallorca, Spain.

Ms Borus, who sat for her KCSE in Precious Blood Riruta, emerged the best girl in Nairobi County in the 2013 KCSE results.

Below is the campuswide leter sent out by the Provost:

I am writing, on behalf of the President and Provost, with terrible news to convey on this Commencement Weekend. We have lost another member of our student community.

Police this afternoon have confirmed the death of an undergraduate coterm student who was found in a residence on campus. The police have told us there is no ongoing safety threat to the campus community.

It is difficult for me to convey the depth of anguish I feel, and I know many of you will feel, at this news. It is impossibly challenging to comprehend the death of another student at Stanford this year.

We have been in touch with the student’s family this afternoon. While we are working to understand the family’s wishes, we are not in a position to share the identity of the student. We also will be reaching out to friends and colleagues of the student to offer support and care, now and over time.

I want to urge all of you, as well, to reach out for support. Many students are in the process of traveling home or elsewhere for the summer right now. Even if you are off-campus, I encourage you to contact one of the campus-based resources listed below:

I am profoundly grieved to have to share this news, particularly in the wake of the deaths of multiple members of our campus community this year. I wanted to share the news as soon as possible, recognizing that there is clearly a need for greater conversation. We will share more information as soon as it is available.

At this moment in the year, many of us are dispersed around the globe. However, our sense of community travels with us wherever we go. I hope you will reach out to each other to extend care and support, and we at the university are here for you, as well.

Two lesbians arrested in Thika while making out in public

The U.S. Department of Homeland Security today implemented the Inadmissibility on Public Charge Grounds final rule. Under the final rule, DHS will look at the factors required under the law by Congress, like an alien’s age, health, family status, assets, resources, and financial status, education and skills, among others, in order to determine whether the alien is likely at any time to become a public charge. The rule now applies nationwide, including in Illinois.

Self-sufficiency is a long-standing principle of immigration law. Since the 1800s, inadmissibility based on public charge has been a part of immigration law. Since 1996, federal laws have stated that aliens seeking to come to or remain in the United States, temporarily or permanently, must be self-sufficient and rely on their own capabilities and the resources of family, friends, and private organizations instead of public benefits.

“President Trump continues to deliver on his promise to the American people to enforce our nation’s immigration laws. After several judicial victories, DHS will finally begin implementing the Inadmissibility on Public Charge Grounds final rule,” said Ken Cuccinelli, the acting deputy secretary of the Department of Homeland Security. “This rule enforces longstanding law requiring aliens to be self-sufficient, reaffirming the American ideals of hard work, perseverance and determination. It also offers clarity and expectations to aliens considering a life in the United States and will help protect our public benefit programs.”

The final rule defines “public charge” as an alien who has received one or more public benefits (as defined in the rule) for more than 12 months, in total, within any 36-month period.

Applicants for adjustment of status who are subject to the final rule must show that they are not likely at any time to become a public charge by submitting a Form I-944, Declaration of Self-Sufficiency, when they file their Form I-485, Application to Register Permanent Residence or Adjust Status.

To determine whether an alien is inadmissible on the public charge grounds, USCIS will not consider, and applicants and petitioners do not need to report, the application for, certification or approval to receive, or receipt of certain previously excluded non-cash public benefits (such as SNAP, most forms of Medicaid, and public housing) before Feb. 24, 2020. Similarly, USCIS will not consider as a heavily weighted negative factor receipt of previously included public benefits (such as SSI and TANF) before Feb. 24, 2020, in a public charge inadmissibility determination.

READ ALSO:   Long queues as Kenyans in US rush to beat Thursday deadline to acquire Huduma Namba at the Embassy in DC

Certain classes of aliens are exempt from the public charge ground of inadmissibility (such as refugees, asylees, certain VAWA self-petitioners, U petitioners, and T applicants) and therefore, are not subject to the Final Rule.

After today, USCIS will reject prior editions of affected forms, including in Illinois where the rule remained enjoined until Feb. 21, 2020, when the U.S. Supreme Court granted a stay of the statewide injunction. If USCIS receives an application or petition for immigration benefits using prior editions of the forms postmarked on or after Feb. 24, 2020, then USCIS will inform the applicant or petitioner of the need to submit a new application or petition using the correct forms. For applications and petitions that are sent by commercial courier (such as UPS, FedEx and DHL), the postmark date is the date reflected on the courier receipt.

Joy in the Diaspora as Matiang’i extends e-passport deadline

Kenyans in the Diaspora have taken to social media to thank the Ministry of Interior and Coordination of National Government for extending the deadline for the migration to the new generation chip-enabled passports.

In a statement released on Monday, February 24, the ministry headed by Dr Fred Matiang’i announced that it had extended the deadline by 12 months and set March 1, 2021 as the new compliance date.

“The government is progressively phasing out the old, ordinary passports as part of Kenya’s commitment to migrate to the new passports with ICAO specifications,” said Matiang’i.

“However, we note with concern that 1.8 million Kenyans, mostly in the diaspora, are yet to replace their old passports with the East African Community biometrics e-passports,” he added

“Due to this, the government hereby extends the deadline for voiding the current dark blue machine-readable passport by 12 months. As such, its holders may continue using it until March 1, 2021, when it will no longer be valid for traveling,” the Ministry statement read in part.

The statement further noted that the Ministry  had set up six other centers in the diaspora, with three in Europe (Berlin, Paris, and London) and one in the US (Washington DC).

The government has also set up a center in Johannesburg, South Africa and Dubai to facilitate the new passport measures.

Before Monday’s announcement, long queues were being witnessed at various embassies, High Commissions and consulates as Kenyans in the Diaspora sought to beat the earlier deadline

The ministry also  announced that in an effort to rationalize the issuance of the e-passports, it has set up and operationalized four passport control centers across the country.

The four centers, they announced, were located in Nakuru, Kisii, Eldoret, and Embu. 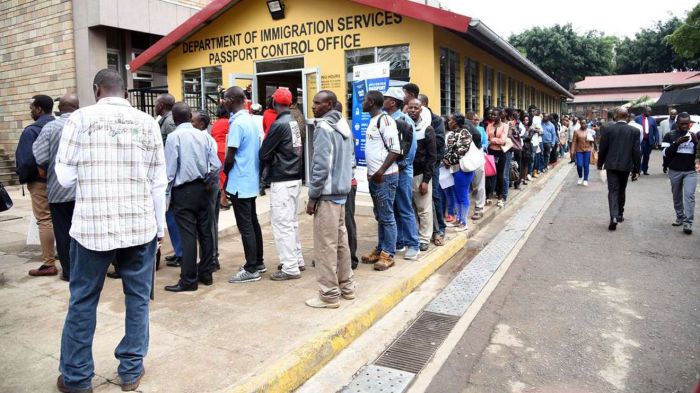 People queue for passports outside the Nyayo House headquarters in Nairobi.

Mr Matiang’i called upon all those who were yet to convert their old passports as earlier urged to take advantage of the new extensions to fulfill the requirements.

“Considering this is the second extension, the 1.8 million Kenyans still holding the dark blue passport are urged to take full advantage of the period to acquire the EAC-format electronic passports as early as possible.

“They should do this to avoid a last-minute rush, unnecessary jam-ups at the centers and traveling inconveniences,” the statement reads.

Here is the full statement:

So what is an e-passport?

An e-Passport contains an electronic chip. The chip holds the same information that is printed on the passport’s data page: the holder’s name, date of birth, and other biographic information. An e-Passport also contains a biometric identifier.

For instance, the United States requires that the chip contain a digital photograph of the holder.

The United States requires that travelers entering the United States under the Visa Waiver Program have an e-Passport if their passport was issued on or after October 26, 2006. Additional information on VWP e-Passport requirements.

All e-Passports issued by Visa Waiver Program (VWP) countries and the United States have security features to prevent the unauthorized reading or “skimming” of data stored on the e-Passport chip.

Benefits of an e-Passport

The biographic and biometric data contained in the electronic chip can be compared to both the traveler and the travel document being presented. There are multiple layers of security in the e-Passport process that prevent duplication.

The United States and its VWP partners have worked together through extensive testing to identify a technology solution to support the production of e-Passports and e-Passport readers. Successful testing in the United States and overseas has been an important step forward in a larger, comprehensive effort to enhance security and facilitate legitimate travel and trade through international cooperation.

VIDEO: Did you miss Peter Ng’ethe’s Funeral Service in Atlanta? Here it is

A funeral Service for the late Peter Ng’ethe was held at Christ Harvesters Global Outreach Church on Saturday. The late Ng’ethe  was set to be buried on Saturday Feb 22, 2020 at Kennesaw Memorial Park in Marietta, Georgia Address: 1306 Whitlock Ave NW, Marietta, GA 30064 at 1.30PM.

He was a dear Husband to Serah Ng’ethe (Mama Njoki)
Father to Njoki Mwangi, John Njoroge and Makena Njoki.

May He Rest in Peace. Watch:

Nairobi is like Washington DC, Sonko says in defense of latest hand-over

Kenya to import US wheat from Idaho, Oregon, and Washington

Why most Kenyans prefer to build their own homes

VIDEO: Kenyan lady in the US who wrote the book titled “Picking up the Pieces” dies in mysterious circumstances