The Central Bank of Kenya Governor Patrick Njoroge during the Madaraka Day celebrations on Saturday, announced the abolishment of all current Ksh1000 banknotes.

In his speech after President Uhuru Kenyatta, Njoroge stated, “We have launched new banknotes in accordance with the constitution.

“We are withdrawing all the older ksh1000 banknotes. The new banknotes will be immune to corruption.

“Old generation one-thousand shilling banknotes will need to be exchanged by October 1, 2019, after which they cease to be legal tender,” read part of the statement Njoroge.

Uhuru explained that the abolishment would aid the government in its fight against corruption.

“In the recent past, I have refrained from constant reference to our war on corruption. This is not a waning of determination, but rather, a clear indication of the confidence and trust that I have in our investigation and prosecution agencies,” he stated.

The CBK governor also launched new era banknotes  during the event which are set to bear new features including the Kenyatta International Conference Centre (KICC).

They will also have images of the big five animals; the lion, leopard, rhino, elephant and buffalo.

Through a Gazette notice, Njoroge further explained that the new banknotes were issued on May 31, 2019 and are already in circulation.

“The Central Bank of Kenya has now completed the process of producing the new-generation banknotes in accordance with the Constitution all applicable laws.

“I can confirm that the new-generation banknotes were issued on May 31, 2019 by a gazette notice. They are now legal tenders,” he explained. 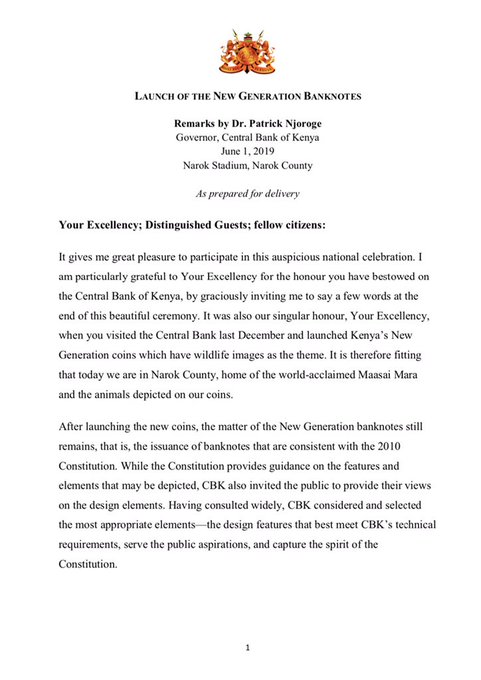 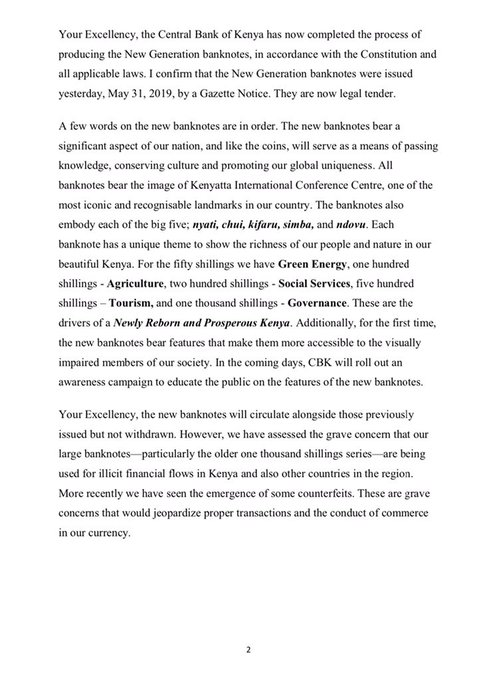 Optiven CEO George Wachiuri has just officially unveiled a symbolism of green energy adoptions at Amani Ridge the Place of Peace in Kiambu. Situated right at the entry point of this gated community, this new landmark named as The Fountain of Peace is 100% solar energy enabled and is a statement of intent by this leading real estate firm to adopt renewable energy for all amenities at this high end prime value added development.

Optiven Group is continuously adopting Green Energy in its real estate developments. This leading real estate firm is alive to the fact that there is a need for Kenyan real estate players to adopt green utilities, green spaces, solar enabled infrastructure such as solar lights and water recycling technology amongst others.

Amani Ridge the Place of Peace is an example of projects that are being designed with green energy in mind.

This modern gated community is quickly coming up with amenities that have a touch of green energy, for the benefit of the residents who will settle here and their future generations.

READ ALSO:   Igathe ditches Equity Bank and Kenyans wonder whether he can ever keep a job for long

We must make use of this God-given source of green energy. We are also adopting water recycling technology where each home that will be set up here will have a bio digester to avoid water wastage. On the other hand, we have set aside 10 green spaces in this gated community in order to make this gated community as natural as possible,” says Wachiuri.

Besides these undertakings, this development will also be installed with underground power cables which emit no electric field and can be engineered to emit a lower magnetic field as opposed to overhead lines.

Optiven has set up a symbolism of all these green energy adoptions, right at the entry point of this gated community, with the installation of a solar energy enabled fountain named as The Fountain of Peace. This new intelligent water fountain is only an example of amenities that will 100% be using solar energy in this development.

Designed by Noble Parks & Pools, this feature is a hint of other value additions at Amani Ridge the Place of Peace that will include green public parks, fruit orchards, cabro internal roads, a superlative entry gate, security stone walls that have been installed with razor wire and CCTV and an elevated steel galvanized 15 meter high 100, 000 liters tank.

Amani Ridge the Place of Peace will also have a provision of club house, house designs, appointed architect, registered community regulations by the county government, a home owners association, and uniformed security guards and two caretakers on site.

A man from Nigeria has been arrested after being accused of running a $50 million scheme that targeted Chicago companies.

Olalekan Jacob Ponle allegedly got an unnamed Chicago-based company to wire transfer more than $15 million. Another local company lost $2.3 million, but investigators believe the scheme is worth more than $50 million.

Sources pointed WGN Investigates to his Instagram feed which looks like a lifestyle of the rich and famous.

Either he or his co-conspirators were able to gain access to company’s email accounts through a phishing attack.

In one of the Chicago cases, they allegedly sent an email that appeared to be from the company’s Chief Accounting Officer to another employee ordering the a transfer.

The criminal complaint says “The fraudulent email was almost identical to a prior, legitimate email” right down to the name on the bank account. But the account “number” was different.

During that time, one of his Instagram posts read: “Money don’t make a man, a man makes money.”

Ponle is a Nigerian national and was taken into custody in the United Arab Emirates. UAE expelled him and federal agents brought Ponle to Chicago Thursday night for an initial court appearance Friday morning.

A detention hearing is schedule for late next week.

News emerging from Nation Centre indicates that some of the country’s top journalistic talents have been fired.

Among those fired are Brenda Wanga (news reporter), anchor Debarl Inea, Sharon Baranga (reporter) and Shaban Ulaya (sports reporter)who have been with the media house for years

A memo by the Nation Media Group’s CEO Stephen Gitagama earlier in the week had outlined that the media company is keen to retain only those with the relevant skills and expertise.

“The Group seeks to radically change its business model from print advertising and physical reader copy to digital advertising, ePaper subscription and content-driven reader revenue with the objective of establishing leadership in the mobile publishing landscape in Africa while exploring other new revenue streams in the experiential and technology space.

“This will require retooling and resourcing the Group with relevant skill sets critical for success in the new business environment. Regrettably this will result in reduction of our workforce effective Friday July 3, 2020,” the memo read in part.

NMG is planning to shift to subscription based journalism after projecting that the traditional advertising business model has run its course using The New York Times as a benchmark.

“This new reality necessitates the reengineering of Nation Media Group to accelerate its digital transformation,” the company’s CEO Stephen Gitagama said in a circular to staff on 1st July 2020.

The company which runs operations across East Africa is looking to send home 100 employees across its markets to achieve its short term objectives.

Media observers opine that the latest purge will lead to reduced journalism quality even as the company tries to style itself as the best ahead of baying competition.

The employees axed on Friday join another 40 who received termination letters on Thursday. The list includes;

Corazon Kwamboka on how she beat disease to conceive

Police questioned on bodies found in car at their station