His last words to his family were, “Let me go. Goodbye. I love you.”

He did not pick.

When Ronnie called him back a few hours later, he could not get through to Ken. At the time, he was already in critical condition in ICU.

Ronnie paid tribute to the idolized 41-year-old leader who has been described as a servant leader.

“Bro, I am so sorry I missed your calls on Tuesday night. I was at PKs planning for his mum’s burial yesterday. As soon as I saw those calls, I felt a knot in my gut. It bothered me deeply. I knew how rare you are on the phone lately. I knew I had missed a chance.”

He added, “Obviously, my numerous calls afterwards and texts until this morning went unanswered as your phone was off. But you know what, I am glad you left in your classical style, AT YOUR OWN TERMS. I pray that we shall be able to bury you at your terms, though many may not understand.”

Ronnie noted, “You lived a full life bro. You leave a legacy that your family and friends, the whole country, will forever remember.”

Read the rest of the glowing and tearjerking tribute below.

From the day we met in 1991 some 28 years ago, me a new student at Olympic Primary and you a KCPE candidate, I knew our destinies were tied.

You told me no one should push me around in my new environment and if for some reason I couldn’t handle you would be there. You have been a brother.

From the hood in Kibra, our primary school life in Olympic, to Starehe. I actually never knew of Starehe until you made it there. At the prize-giving day in 1992, you told me you were expecting to see me at Starehe.

I made it bro, and you were there to receive me with your big smile. I am sorry though for the trouble I gave you as my class prefect. It was bad judgment on Griffins part to make you my prefect. Lol.

You have been such an inspiration to me, and to many. You were never pretentious. You spoke your mind fluently and stood by what you believed in no matter the cost.

Perhaps you learnt well from the quote Griffin emblazoned in front of his office that “Happy are those who dream dreams and are ready to pay the price to make them come true”.

Even when the tide was going against you, you fought for what was just! One day I will tell of how in 2013 when party nominations were being wrung out of your hands, you called and without hesitation, we secured for you a standby nomination at KNC.

I still believe you would have won with whatever party. You know why? Because you were authentically Kibra!

Born and raised and schooled in Kibra. I mean, you could even speak fluent Kinubi!!! #RIPKENOKOTH.

‘Your wife must be a strong woman,’ Babu Owino told after city woman kissed him

VIDEO: Watch Live as Waititu and wife arrive in court, appear before magistrate 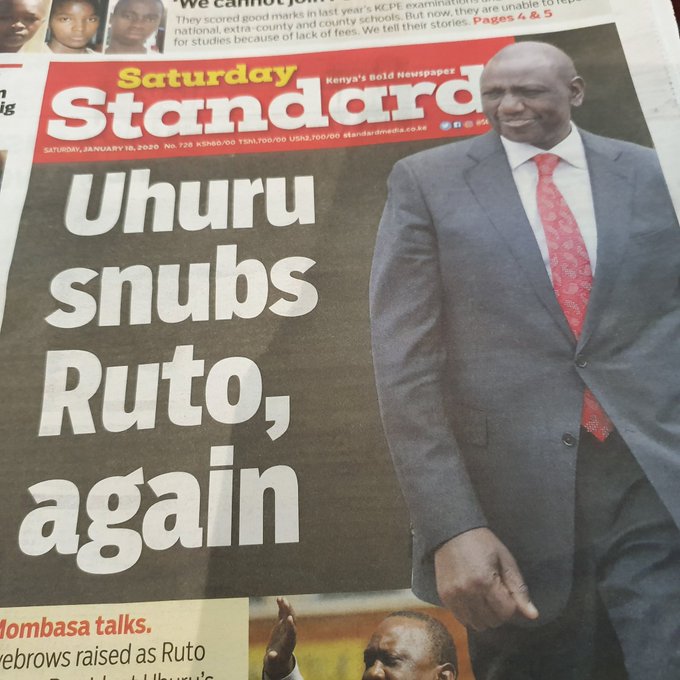 READ ALSO:   Pillar of my life: Ken Okoth showers wife with praise as he battles cancer
In his latest Cabinet reshuffle, whose announcement was made in the absence of the DP, Uhuru sacked Agriculture CS Mwangi Kiunjuri who is considered a Ruto sympathiser.
Going by the challenges experienced in the docket during Kiunjuri’s tenure, one would say his sacking was expected; however, being Ruto’s strong supporter may have inked the pen.
On Tuesday, Tangatanga politicians were denied access to an Uhuru event in Nakuru, yet another perk of being pro-Ruto.
Nakuru Town East MP David Gikaria and Nakuru Senator Susan Kihika were blocked from entering the Rift Valley Regional Headquarters Grounds where the President was issuing title deeds.Kihika tweeted, “I am utterly shocked. Why would I be barred from a function being graced by my President at my home county?”
Despite these telling occurrences Ruto insists his road to the presidency in 2022 is clear.
The rift in Jubilee started widening after the March 9, 2018 Handshake, when Uhuru signed a deal with Opposition leader Raila Odinga.
Following the unity deal and the developing Jubilee cracks, new tendrils begun to sprout where politicians opposed to the bromance started running their campaigns under the euphemism tangatanga while those who support it called themselves Kieleweke.
It is unclear whether Ruto’s woes are strengthening his political muscle or hurting his 2022 ambitions. What is clear though is that the DP’s popularity in parts of the Mt Kenya region has been growing.
Reports also indicate that his plan for 2022 seems to be on course, the only thorn in his flesh may be calls for a referendum that have emanated from BBI, which he claims has been hijacked by ODM to craft its 2022 political line up.
by The Standard

SHARES
ShareTweet
READ ALSO:   Sonko asks all unmarried women who have been impregnated by Kenyan politicians to call him
Continue Reading