The late John Thiongo Thuo, 54,  was laid to rest on Friday August 9 2019 at the Westlawn II Cemetery, Lowell, MA
Thion’o passed on, on July 25, 2019, after a long, hard-fought battle with gallbladder cancer. He was the beloved husband of Lucy Thiongo and father of Marc Brian Thiongo and Ivy Margaret Thiongo, all of Dracut,Massachusetts.

John Thuo Thiongo was born December 23, 1964 in Kenya, he was the son of Simon Kabutu Thuo and Margaret Wanjiru Thuo, brother to James Kabutu, Julia Thuo, Lucy Muchina, Zacharia Thuku, and Joseph Kariuki, all of Kenya.
He is also survived by many nephews and nieces.

Friends and Family were received at the Community Christian Fellowship Church, 105 Princeton Blvd., Lowell, on Friday 9 to 10 a.m, followed by his Funeral Service at 10 a.m. 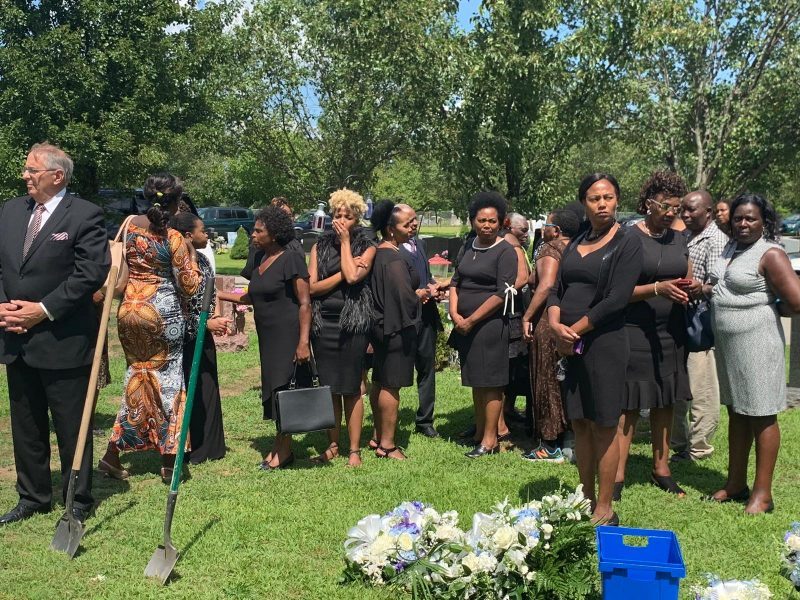 The solemn event was attended by many close friends and family and one of the late John Thuo Thiongo’s long time Nairobi University classmate and best friend Mr Nelson Waweru, who is now a Professor of Accounting to the School of Administrative Studies, Atkinson Faculty of Liberal and Professional Studies, at York University,Toronto,Canada.

You have really stood with us and made us stronger. May the good Lord extends your boundaries always in Jesus name. Amen.

On behalf of the entire family, we want to take this opportunity to thank you all for your support, prayers, time, presence, contribution, and tireless work during this grieving process. You have really stood with us and made us stronger.

On behalf of the entire family, We want to take this opportunity to thank you all for your support, prayers, time, presence, contribution, and tireless work during this grieving process.

May the good Lord extends your boundaries always in Jesus name.,May the Lord refresh you just as you have refreshed others. Amen!

“HE LATE JOHN THUO THIONGO, GREW UP AS AN OBEDIENT CHILD WHO USEDD TO HELP HIS PARENTS AND SIBLINGS AT HOME AND IN THE COMMUNITY.

HE WAS BAPTIZED WHEN HE WAS A BABY AND CONFIRMED IN CHURCH WHEN HE WAS OF AGE.
EDUCATION
THE LATE JOHN STARTED SCHOOLING IN KIGANJO IN THE YEAR 1971, AND IN 1972 HE GOT ENROLLED IN TULAGA PRIMARY SCHOOL FROM STANDARD ONE TO SEVEN IN 1979.

HE WENT TO MAGUMU SECONDARY FOR HIS A LEVEL EDUCATION OF FORMS 1 TO 4.

HE ADVANCED FURTHER TO COMPLETE FORMS 5 AND 6 IN KIANYAGA HIGH THEN ADVANCED TO NAIROBI UNIVERSITY WHERE HE RECEIVED HIS BACHELORS AND LATER RETURNED FOR HIS MASTERS DEGREE.

HE THEN CAME TO AMERICA AND ENROLLED IN THE UNIVERSITY OF NEW HAMPSHIRE TO COMPLETE HIS ASSOCIATE DEGREE IN NURSING TO BECOME AN RN FROM 2001-2003.

LASTLY, HE ENROLLED IN THE UNIVERSITY OF MASSACHUSETTS, LOWELL FOR HIS MASTERS IN BUSINESS ADMINISTRATION (MBA), FINANCE AND HUMAN RESOURCES FROM 2005-2007.
MARRIAGE
THE LATE JOHN MET AND LATER MARRIED LUCY KANYI IN 1990, IN CHURCH OF TORCH THOGOTO. THEY HAVE BEEN BLESSED WITH TWO CHILDREN, MARCBRIAN THUO AND IVY MARGARET WANJIRU.
EMPLOYMENT
THE LATE JOHN WORKED IN DIFFERENT COMPANIES, LIKE PORTLAND CEMENT, COFFEE RESEARCH FOUNDATION, HENKEL CHEMICALS LIMITED, AND ECOLAB MOMBASA, THEN HE RELOCATED TO THE UNITED STATES OF AMERICA IN 2001.

IN THE STATES, HE GOT ENROLLED IN A NURSING SCHOOL WHERE HE GOT HIS DEGREE IN NURSING.

HE DID HIS MBA AND UPON GRADUATING HE WENT FOR TRAINING IN NEWTON-WELLESLEY AS AN ADMINISTRATOR-IN-TRAINING FOR KINDRED HEALTHCARE. HE LATER TRANSFERERED TO MAINE TO START HIS NEW JOB AS AN ADMINISTRATOR. OTHER PLACES HE WORKED FOR KINDRED HEALTHCARE WERE AVERY MANOR, HE LATER LEFT KINDRED AND WENT TO WORK FOR GOLDEN LIVING CENTER IN ATTLEBORO UNTIL 2017, WHEN HE WAS DIAGNOSED WITH GALLBLADDER CANCER.
HOSPITALIZATION
THE LATE JOHN WAS HOSPITALIZED AND TREATED IN DIFFERENT HOSPITALS ; ANGELLES HOSPITAL IN MEXICO,LOWELL GENERAL HOSPITAL MAIN/SAINTS CAMPUS, LAHEY HOSPITAL, DANA FARBER CANCER CENTER, BRIGHAM AND WOMEN’S HOSPITAL, AND MERRIMARCK VALLEY HOSPITAL IN HAVERHILL WHERE HE PASSESD AWAY ON JULY 25, 2019 AT 2AM SURROUNDED BY HIS FAMILY.

PRIOR TO HIS DEATH, HE HAD ACCEPTED JESUS AS HIS PERSONAL SAVIOR. IT WAS GOD WHO GAVE JOHN THIONGO THUO UNTO US AND IT IS HE WHO HAS CALLED HIM BACK HOME. BLESSED BE THE NAME OF THE LORD.” 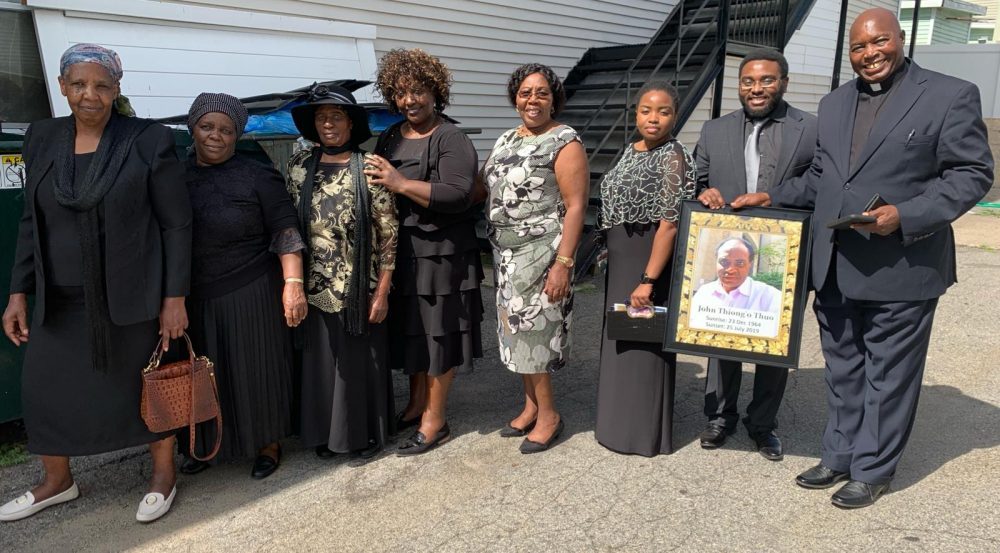 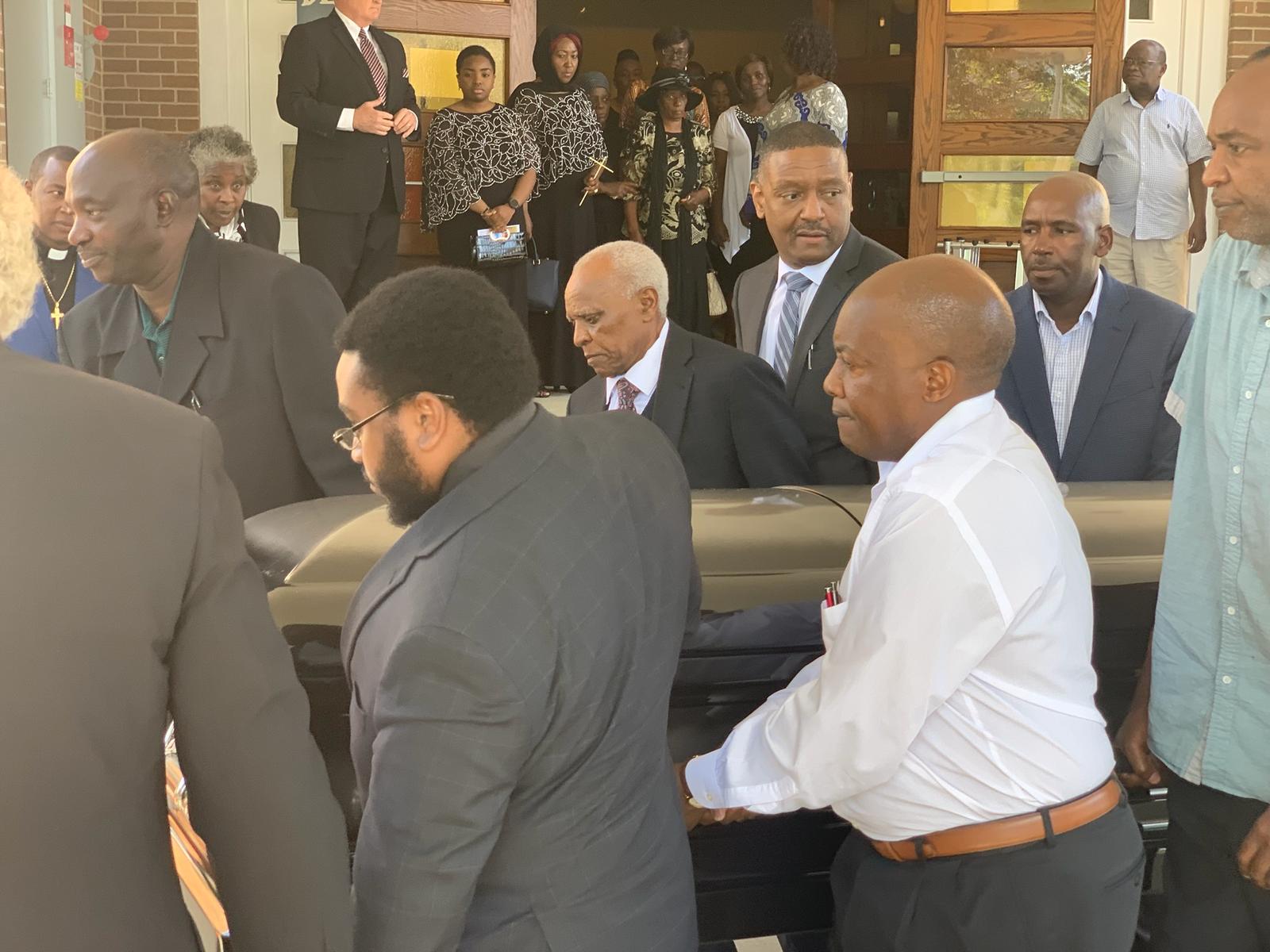 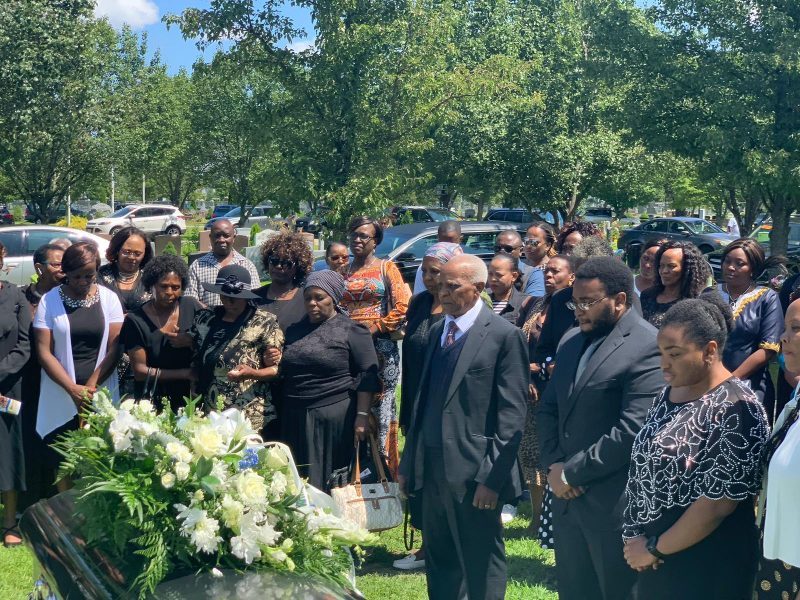 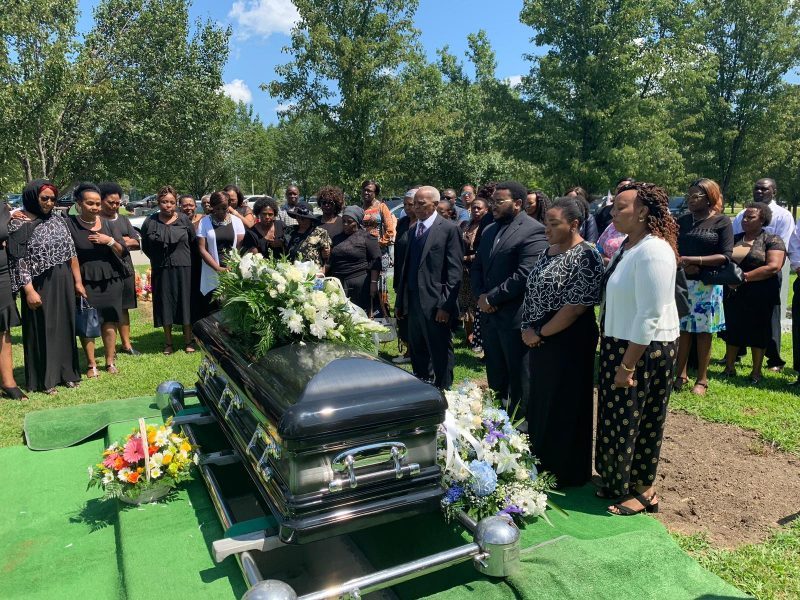 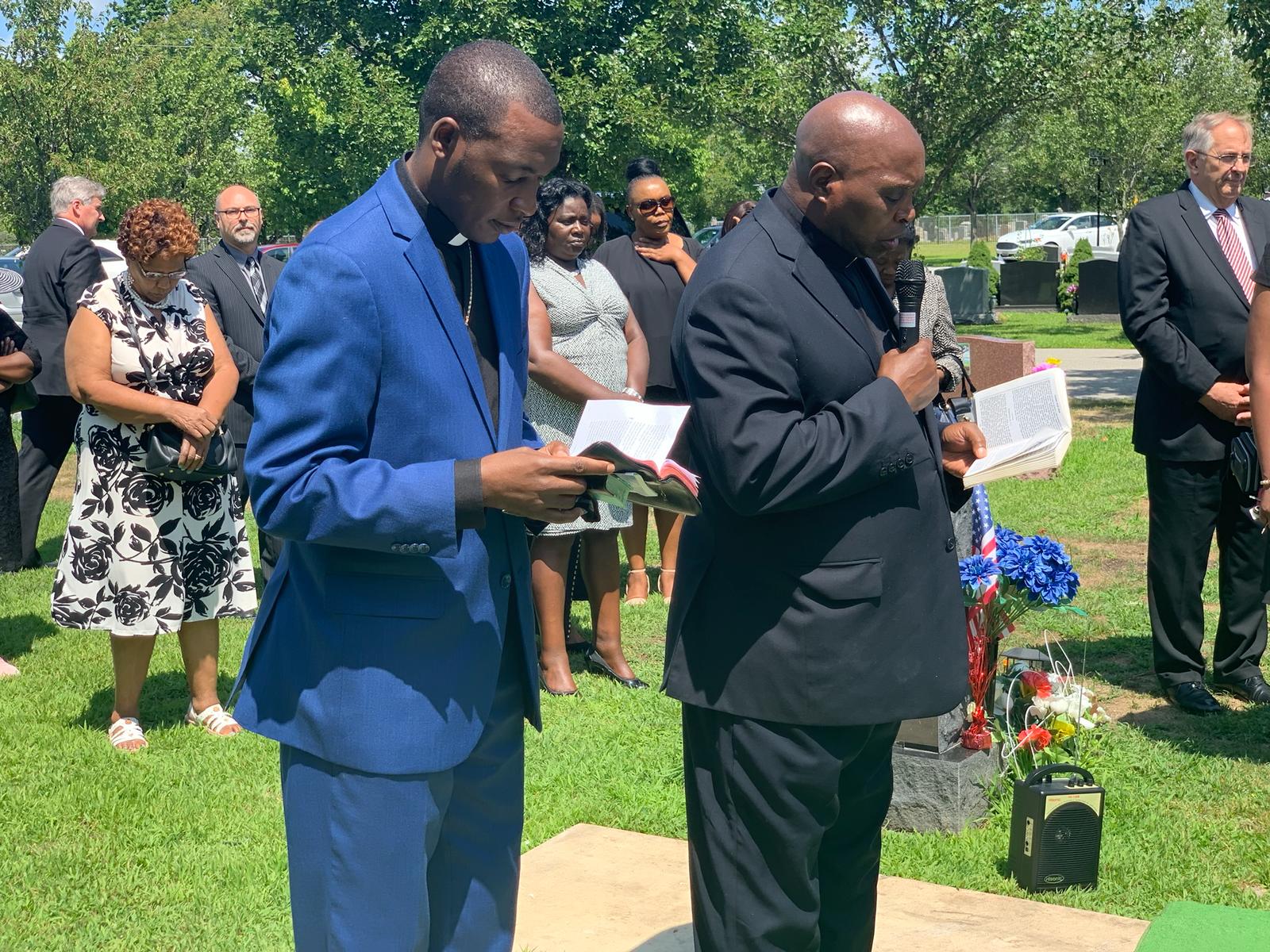 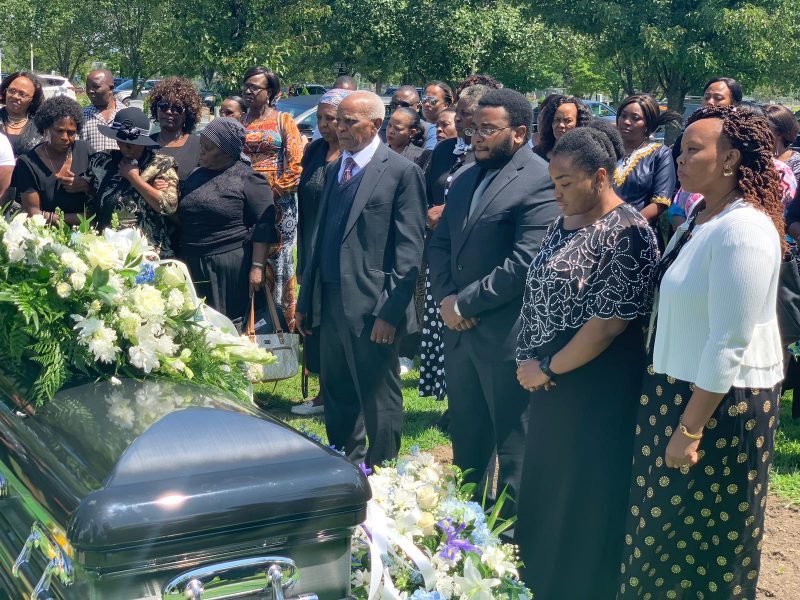 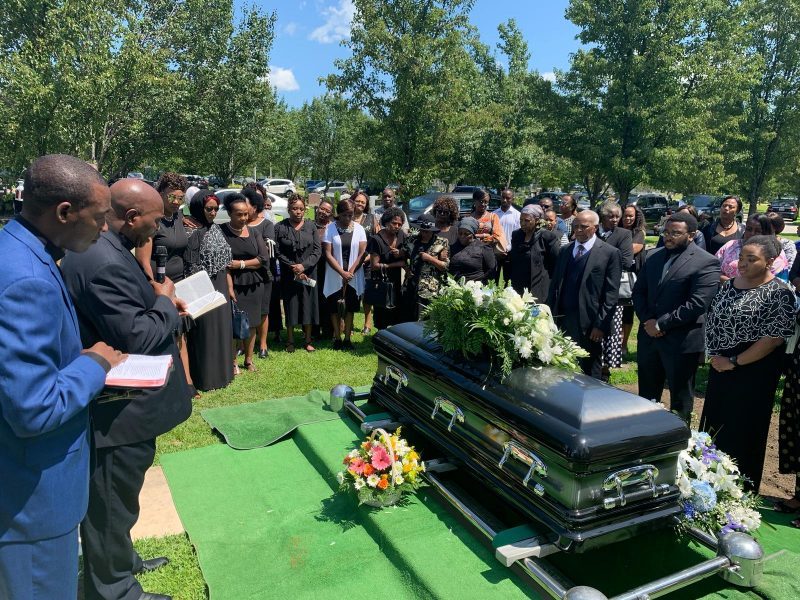 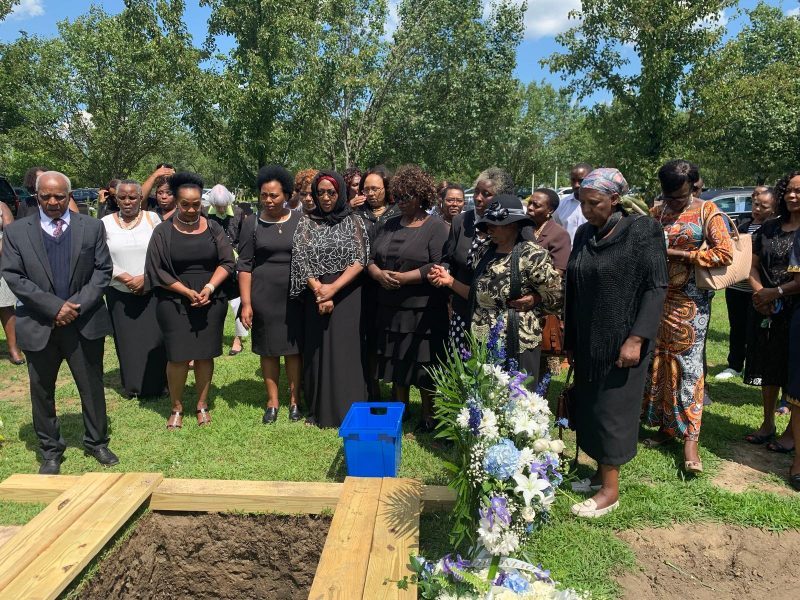 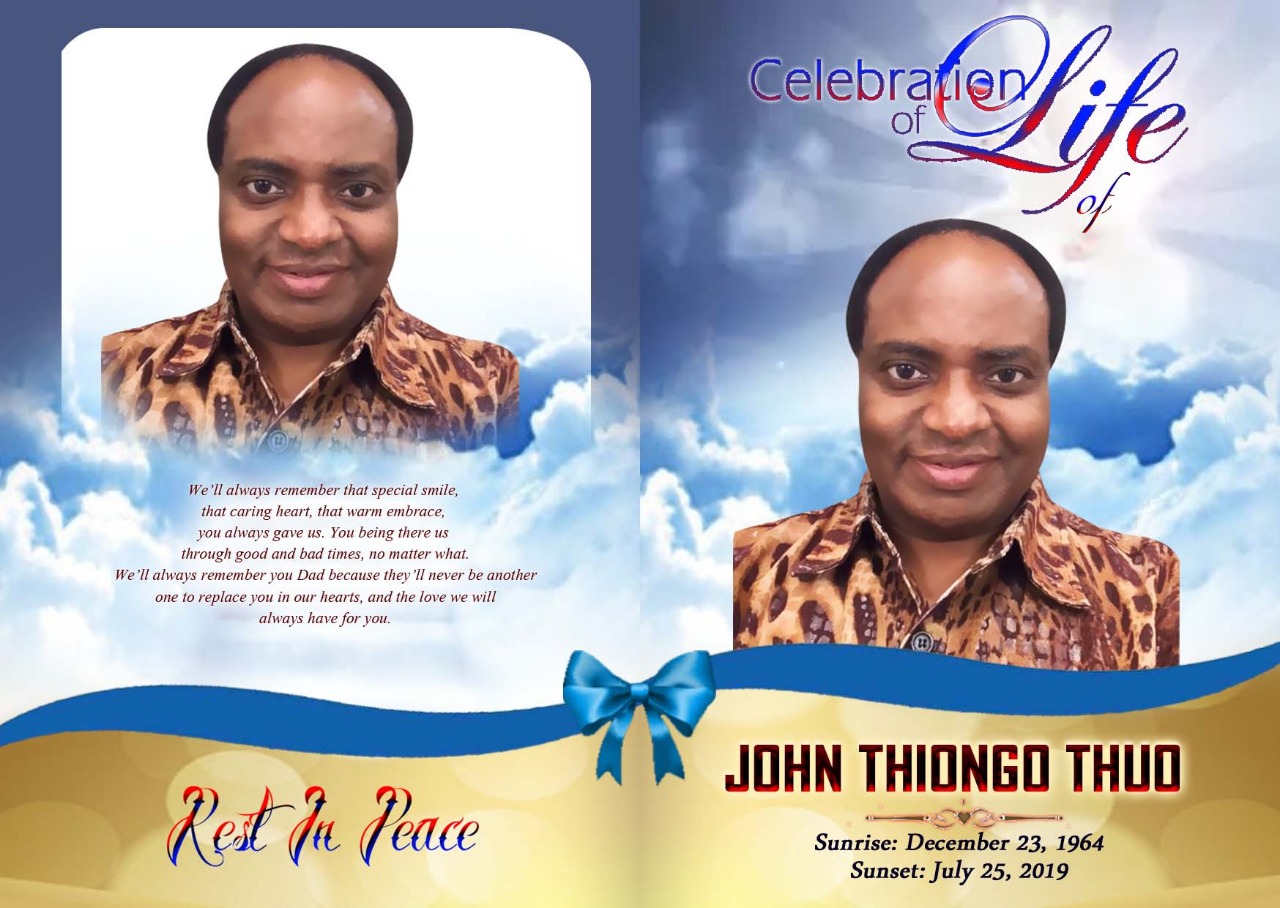 0
SHARES
ShareTweet
Related Topics:
Up Next

U.S. Citizenship and Immigration Services (USCIS) and the Department of Homeland Security (DHS), in consultation with the Department of State (DOS), have announced the list of countries whose nationals are eligible to participate in the H-2A and H-2B visa programs in 2020. The notice listing the eligible countries will be published in the Federal Register on Jan. 17, 2020.

For 2020, the acting secretary of Homeland Security has determined, with the concurrence of the Office of the Secretary of State, that the countries designated as eligible in 2019 will remain unchanged.

DHS maintains its authority to add countries to the eligible countries list at any time, and to remove any country whenever DHS and DOS determine that a country fails to meet the requirements for continued designation. Examples of factors that could result in the exclusion of a country or the removal of a country from the list include fraud, abuse, denial rates, overstay rates, human trafficking concerns, and other forms of noncompliance with the terms and conditions of the H-2 visa programs by nationals of that country.

The H-2A and H-2B visa programs allow U.S. employers to bring foreign nationals to the United States to fill temporary agricultural and nonagricultural jobs, respectively. Typically, USCIS approves H-2A and H-2B petitions only for nationals of countries that the secretary of Homeland Security has designated as eligible to participate in the programs.

However, USCIS may approve H-2A and H-2B petitions, including those that were pending as of the date of the Federal Register notice, for nationals of countries not on the list on a case-by-case basis only if doing so is determined to be in the interest of the United States.

Effective Jan. 19, 2020, nationals of the following countries are eligible to receive H-2A and H-2B visas:

**Regarding all references to “country” or “countries” in this document, it should be noted that the Taiwan Relations Act of 1979, Pub. L. No. 96-8, Section 4(b)(1), provides that “[w]henever the laws of the United States refer or relate to foreign countries, nations, states, governments, or similar entities, such terms shall include and such laws shall apply with respect to Taiwan.” 22 U.S.C. § 3303(b)(1).

Accordingly, all references to “country” or “countries” in the regulations governing whether nationals of a country are eligible for H-2 program participation, 8 CFR 214.2(h)(5)(i)(F)(1)(i) and 8 CFR 214.2(h)(6)(i)(E)(1), are read to include Taiwan. This is consistent with the United States’ one-China policy, under which the United States has maintained unofficial relations with Taiwan since 1979.

This notice does not affect the status of H-2 beneficiaries who currently are in the United States unless they apply to extend their status. It does apply to nonimmigrants changing status in the United States to H-2A or B. Each country’s designation is valid, subject to removal for failure to meet the requirements for continued designation, from Jan. 19, 2020, until Jan. 18, 2021.

Kenyans in the diaspora sent home ksh280 billion in 2019

The amount shows a 3.7 percent growth compared to the previous year, whose remittances roughly $2.6 billion (KSh272.3 billion). The lowest remittance was in 2015.

A weekly report bulleting from CBK that was released on Friday shows money sent by Kenyans in the diaspora increase to $250.3 million (KSh25.2 billion) in December 2019. An increase from $218.8 million (KSh22 billion) in November.

Kenyans in North America accounted for the most substantial part of the remittance in December at 50 percent. Following closely was Europe at 20 percent and 30 percent from the rest of the world.

However, the 2019 total remittances did not meet the World bank’s target of Sh285.5 billion. The target amount would have achieved a five percent growth. “The rate of growth of remittance inflows will rise by just 5 percent compared to a 39 percent growth between 2017 and 2018,’’ World Bank said in December.

World Bank sees the reduced growth in diaspora remittances is due to the increasing economic concerns in the US and the United Kingdom, where a recession may be setting in despite strong employment data.

”With the world slipping into a recession, it is feared that remittance inflows may suffer as companies’ layoff staff in the developed world even as employers and employees adopt austerity measures,” World Bank’s report said.

Kenyan-Canadian lawyer, Miguna Miguna, is urging Kenyans in the United Kingdom to partake in a protest against President Kenyatta as he plans to visit the country this week.

Miguna, through his twitter page on Saturday, addressed his supporters, asking them to stage a protest where President Kenyatta will be staying during his visit to the UK. The protest is to demand that the president obeys court rules requiring the government to allow him to enter the country.

“Red Alert! Notice to all Patriots in London! Uhuru Kenyatta will be in London, UK, from January 20, 2020,” wrote Miguna.

He added: “He will be shuttling between the Town House located at 66 Lowndes Square, Kensington, and 10 Downing Street. Find him. Show him that No One is Above the Law!”

“Arrived in London, ahead of H.E. President Uhuru Kenyatta who, at the invitation of Prime Minister Boris Johnson, will join other leaders for the Africa-UK investment summit on 20th January 2020,” Dr. Juma wrote on Twitter on Saturday.

Miguna is currently stuck in Germany after his return to Kenya on January 7 th was rendered impossible by the Kenyan Government that issued a red alert warning airlines not to fly Miguna to Kenya or any African nation.