Controversial former Nairobi rep aspirant Karen Nyamu over the weekend shocked many after she was pictured smoking.

Nyamu, who was seated in a crowd of football fans, could be seen puffing before passing it to a male fanatic who was seated next to her. Other people surrounding her were busy chewing mogoka.

Kenyans have reacted to Karen smoking in public and below are some of the comments;

Charles Omolo Political class will always do anything to please the voter! Karen Nyamu had to smoke to please them! #UshenziKE

Keem Karen Nyamu has just elicited another blow to a Kenyan woman after seen smoking weed in public which knows to be illegal. Doesn’t she wants to be an aspirant or just gotten spoiled shame

Betterman Simidi Musasia Waiting to see whether DCI will put her in lawful custody like the youth who use this drug!

Otieno John How canshe smoke bhang in public. What is she encouraging

Makova Kevin Snr The campaign to legalize marijuana is taking the wrong path, I am pro-marijuana despite every negative publicity lakini when leaders and the media ride on such a sensitive topic for careless public opinion we now lose the main objective…

Douglas Omurwa I used to smoke this until I went nuts… Can’t touch it.

Eugine Kay Kayleen Waiting for Sonko to give a press conference

Karen later responded to critics, telling them to talk about her sponsoring the event as well.

WHY DON’T YOU ALSO SAY THAT I SPONSORED CASH AWARDS IN THE INDIVIDUAL CATEGORY IN THE SAME TOURNAMENT. 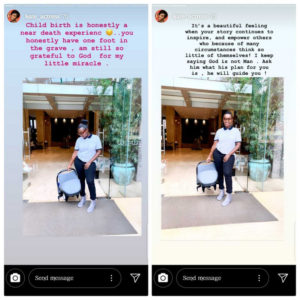 Turkana dancing shrine where the wayward turned into stones