When we talk of Jeff Koinange, we see a man whose childhood was all rosy and future well secured, but that’s not it!

Jeff Koinange was born to a father, whose father, was a prominent Kikuyu chief during Kenya’s colonial period.

Therefore where Jeff falls in this lineage is, his grandfather, Koinange Wa Mbiyu was the wealthy one and probably that trickled down to the chief’s sons, including Jeff’s father, the late Fredrick Mbiyu Koinange.

However, things got worse after Jeff’s father passed on and left Jeff behind, in the hands of a single mom who raised them up in a normal family set-up.

This the aging mother revealed during Jeff’s recent event on Sunday hosted at Country Roads, Thika Greens Golf Resort, with both in attendance.

Mary Mbiu, Jeff’s 82-year old mother, took over the podium to clarify that her son was not born with a silver spoon as the world has grown to assume.

People should not associate the name Koinange with riches because Jeff was raised in a normal family set-up. I raised him like a normal child because his father died when he was still young. 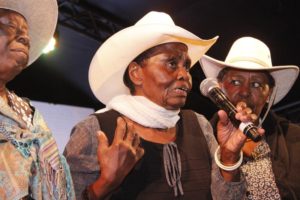 READ ALSO:   PHOTOS: Comedian seems to have moved on after breaking up with fiance

Mbiyu Koinange was a Kenyan politician who served in the government and cabinet of Kenya’s first president, Mzee Jomo Kenyatta, for a whooping 16 years.

Jeff’s father on the other hand, was the first Kenyan to open a car dealership but later died in the year 1966, a time when Jeff was barely 2 years of age.

Additionally, Jeff’s mother pointed to the fact that young ladies should remain content with what they have and not blindly run after a man’s wealth like is the case today.

US to collect DNA of all undocumented migrants

After exposing Victor Ber on Wednesday, 1 July,  Zeddy is now back for Sleepy and Teacher Wanjiku!

According to the female comedian, fans need to know the dark side of the churchill show and it’s corrupt officials. She opened up about the unknown secrets of the show after the tragic deaths of Kasee and Njenga Mwalimu.

As seen on her post, those responsible for this are the Churchill show officials who neglect comedians letting them rot in poverty; after being ‘used’ to drive up number for the TV show.

Zeddy went on to add that  all this is planned and executed by the creative director, Victor Ber; who she strongly seems to dislike.

With her post making rounds on social media; Sleepy decided to respond by defending Ber and Wanjiku. But, little did he know that Zeddy would drag into the drama exposing why his job remains stable at the Churchill show.

This is however after Sleepy accused Zeddy of clout chasing; a statement that pushed Zeddy to leave no stone unturned as she savagely clapped back at her colleague!

Well apparently Sleepy has been getting favour from Ber since they are friends with Teacher Wanjiku – which is not a secret. Zeddy claims that Sleepy has been working behind Churchill’s show and to prove this; the lass promised fans Sleepy will be the first one to quit from the TV show.

READ ALSO:   ‘We took a loan to buy clothes for Groove Award nominations – Njugush and wife

With the likes of Jemutai, Mammito, and the few ladies we have seen once in a while on the show; Zeddy says that these ladies could not go far thanks to Victor Ber.

This is apparently because he makes sure to ‘kill’ their talents to pave way for his wife’s success as the Queen of comedy.

Berry never wanted any girl Comedians to succeed ndio bibi yake ashine, a reason why we have few female comedians ni juu ya ber,alihakikisha most wamedie ndio bibi yake ashine as “queen of comedy.” when Wanjiku put up her show at kicc ya girls are also funny most of the girls walikuwa threatened wakapiga in fear wasinyimwe churchill show,

Although she kept Wanjiku’s part short and brief, Zeddy made sure that her massage got out loud and clear. In conclusion, Zeddy warned Churchill against Sleepy who will one day back bite him. She wrote;

American polymath Benjamin Franklin once said “three can keep a secret, if two of them are dead.”

The two have been keeping the pregnancy a secret for months now and word from the streets is that Kwamboka is in her second trimester.

“Corazon is expecting and the baby daddy is Frankie Just Gym It. They are keeping it a secret. The information I got is that she is six months pregnant as we speak and if you may have noticed lately she hasn’t been posting full pictures of herself on Instagram,” a source privy to this development told Nairobi News.

Kwamboka and the fitness trainer sparked speculations a few months ago when she shared a picture of themselves spending some quality time together.

Later in a Q&A session with her followers on Instagram, Kwamboka was asked by one of her fans if she was now dating the fitness instructor to which she responded curtly: “We’re chilling.”

Kwamboka and Frankie’s situation caught many by surprise as the dust hadn’t settled on news that the gym instructor had parted ways with her longtime girlfriend YouTubeer Maureen Waititu.

No one had seen that coming.

The two had served couple goals documenting their relationship on the internet, having been together for six years and in the process siring two sons.

Kwamboka had earlier revealed that she intends to be a mother in 2020 having struggled with ovarian cysts which were successfully removed sometime last year through surgery.

Outspoken media personality Anita Nderu got herself on the receiving end after hosting gay men on her cooking show.

Social media users slammed Anita expressing their disappointment in the woman they said they valued highly.

However, the radio presenter was forced to explain herself claiming those were just her friends who decided to show their real selves.

Responding to an Instagram fan, Anita said that nothing about her show was scripted.

“I respect your opinion. I simply asked my friends to come on my web show and be themselves. What any of us have chosen to do on the show is how each of us is. Nothing about my show is scripted. What you see from the guests, food to outcome is what actually genuinely took place,” responded Anita.

Kenyans made the beauty a trend on Twitter as they made fun of the show with the majority claiming she was advertising cooking Fresh Fry cooking oil.

However, the company behind the oil issued a statement denying having any deal with Nderu.

Fresh Fri would like to state that we have not engaged Anita Nderu for product placement or any other advertising of any kind. However, we would like to thank her for being a Fresh Fri consumer.
Fresh Fri is keen on delivering quality products that promote #HealthyLiving

Check out some reactions below,