After a four-month-long demonetisation exercise, the Central Bank of Kenya (CBK) has invited detectives to examine 3,172 suspicious deposits.

The Kenya Revenue Authority can also stake a claim to Sh60 billion in new deposits flagged in the exercise.But the currency audit numbers tell only part of the narrative.

The full story will unfold as individuals found to have made suspicious deposits begin their appointments with the Directorate of Criminal Investigations (DCI), the taxman and other investigative agencies.

It is a story that is likely to expose the rot in the country’s financial system, which was expected for an exercise that President Uhuru Kenyatta’s Government believed was necessary to restore order in the banking industry.

For the last four months to September, the CBK has been steadfast in its pursuit to unearth the dirty money, and it put out 15,000 advertisements.

Governor Patrick Njoroge yesterday said they had flagged 3,172 suspicious transactions whose value he did not reveal.In his last press briefing on demonetisation, Dr Njoroge said condemned notes valued at Sh7.4 billion had been rendered worthless after its holders failed to beat the September 30 deadline to exchange them with new notes.

Although some journalists felt that the Sh7.4 billion figure was smaller than expected, the CBK governor said the demonetisation process had successfully met its twin objectives of curtailing illicit financial transactions as well as the proliferation of fake currency.

Curiously, the money that did not find its way back into the banking system was almost as much as the Sh7.7 billion that the country lost through the Goldenberg scandal in the 1990s.

Njoroge said the lost cash could be part of the dirty money its holders had been unable to redeem.He added that other investigative agencies – including the Ethics and Anti-Corruption Commission and Financial Reporting Centre – had crucial information pertinent to their mandate.

“There is good information that these agencies will continue to work on,” said Njoroge, adding that the fight against dirty cash did not end on September 30.The Government also drew the taxman’s attention to Sh60 billion that found its way into the formal banking system.He said with the end of the exercise, KRA could now deal with tax matters more easily after discovery of the new fortunes.

The governor noted that with so much cash finding its way into the banks, more transactions were going to be cashless.“The demonetisation process proceeded very well,” said Njoroge, noting that majority of the transactions were below Sh1 million.

This means that 99 per cent of the money that went into bank accounts was not subjected to the stringent anti-money laundering and counter-terrorism financing (AML/CFT) rules.Deposits or withdrawals of less than Sh1 million are not subjected to additional scrutiny.

But Njoroge insisted that at no point did banks fail to comply with the AML/CFT measures, saying some banks even rejected deposits.He, however, did not give the number of times banks did this or the value of money that was rejected.

The governor conceded that there had also been a lot of work done on the counterfeit front following increased incidences of fake money circulating.  He, however, acknowledged that a few transactions might have “slipped through filters” into the banking system.

When he announced the demonetisation process on May 1, Njoroge cited the need to combat illicit financial flows in the country and region, which had largely been perpetuated by the condemned notes.

During the demonetisation period, money flowed back into the financial system in billions of shillings, as Kenyans who had put their savings “under the mattress” opted to park their wealth in bank accounts.Njoroge said people did not exchange the old currency for new notes and take the money back to their hiding holes.

Unveiled with fanfare in 1994, the Sh1,000 notes bowed out of circulation with a tarnished reputation.Njoroge noted that the old note was the “oil that kept the wheels of corruption, drug trafficking, tax evasion and other crimes rolling”.

BREAKING: Hussein Mohamed quits Citizen TV; what will be his new home?

Court reinstates banker sacked for ‘lying’ she is single

I quit computers for my passion in beauty industry

Beauty and matters skincare are mainly associated with women with most men shying away from the fast-growing sector.

Mwangi Kamau has, however, gone against the grain and made a name in the female-dominated field.

Mr Kamau, who is the proprietor of Blush On Skincare Limited, a Nairobi-based company dealing with cosmetics, has been in the field for 10 years offering solutions to skin problems.

“I always wanted to be in the medical field dealing with human beings or animals, but along the way I found myself doing computer science. But I realised I did not have passion for computers. I really wanted to help for better health and wellbeing,” says the 37-year old cosmetologist and a skincare consultant.

In 2006, he joined a cosmetology college where he graduated with a diploma, enabling him to secure a job as a beauty consultant for eight years. This made him develop more interest. In 2015, he went to Italy to do a two-year course, specialising in skincare.

“After doing computer science I realised that I still wanted to be a health practitioner.”

Having sharpened his skills and knowledge in Italy, he returned home with a dream of stating a business.

“I started the business in 2017 August after getting disappointed by my employer and also realising that I would actually achieve my dream better if I had freedom to work round the clock and engage with clients who have issues in different parts of the world,” he says.

Starting out, he tells Enterprise, was a big challenge as he didn’t have enough capital to run an office. This made him to start off online which was very tough. However, this was by no means easy.

His work as a skincare expert entails consultation, training and products. He also offers consultation to pharmacies and beauty clinics as well as training in makeup and basic skin knowledge.

“I also have a cosmetics line that I recommend to my clients,” adds Mr Kamau.

The entrepreneur says cosmetology is a well-paying career but depends on how one ventures into it; as a side job or full time occupation.

He makes between Sh80,000 and Sh120,000 monthly and has two permanent employees and four on temporary terms.

“For me, it’s the main deal and I get good amount that caters for my needs and also to save and invest for my family,” he notes.

Some of the charges for his services include skincare consultation at Sh1,000, facial treatments at Sh3,500, face makeovers from Sh3,000, depending on the event, personal make-up classes at Sh5,000 and professional types go for Sh5,000 per session.

He said his plan is to come up with better platforms to enlighten people on the best skincare to get when they are purchasing products and what ingredients to watch out for by also coming up with his line. This should be based on the safest but effective ingredients.

“My advice to anyone with this kind of passion but lacks confidence is to always have integrity and honesty. Then the rest will play in line and follow suit.”

“It’s always good to work with the community; so, I have empowered a few young people by training them mainly in make up as we work together and in return they get a retainer,” he told Enterprise.

PHOTO: Ken Mijungu unveils own startup company days after being fired from NTV

Days after being axed from NTV, journalist Ken Mijungu has revealed his next move.

Mijungu took to his social media pages on Monday, July 6, where he announced he was diving into the legal field.

Posting on his Instagram account, Mijungu, a trained lawyer, shared a photo of his new business with his name boldly encrypted on the wall.

From the photo, it was clear that the former TV journalist was shifting his focus from media to focus on legal consultancy.

Believers will always be believers Mathew 6: 26-34

According to the photo, the former anchor’s firm will be offering legal consultancy on immigration, finance, property, imports and exports.

To affirm that his achievement was a matter of faith, Mijungu captioned the post with a Bible verse.

Mijungu who many considered as bold and intelligent was among those who were shown the door at Nation Media Group on Friday, July 3.

He shared the news of his firing through a touching Twitter post that saw most of his fans take to the comment section to encourage and console him.

According to his post, the journalist said he was given his termination letter after working for NMG for seven years.

He thanked the station for the opportunity and thanked God for always been there for him.

The NMG firing came a couple of weeks after Mediamax laid off over 100 workers via text messages.

The government has lifted the lockdown imposed earlier on major cities following the eruption of the Covid 19 pandemic. The announcement by President Uhuru Kenyatta on 6th July 2020 came just three days after Optiven Group CEO George Wachiuri called on the government to lift the lockdown. Wachiuri who was speaking in Kiambu County said this was imperative if the economy was to grow.

He added that, “while we support every effort to keep our people in good health, we have seen a large number sinking in to depression for lack of jobs and basic needs. The number of families seeking intervention for daily upkeep through the Optiven Foundation has grown tremendously in the last three months.“

The eruption of Covid 19 pandemic has contributed to a rundown of the economy, affecting majority of sectors including health, manufacturing, education and many others. 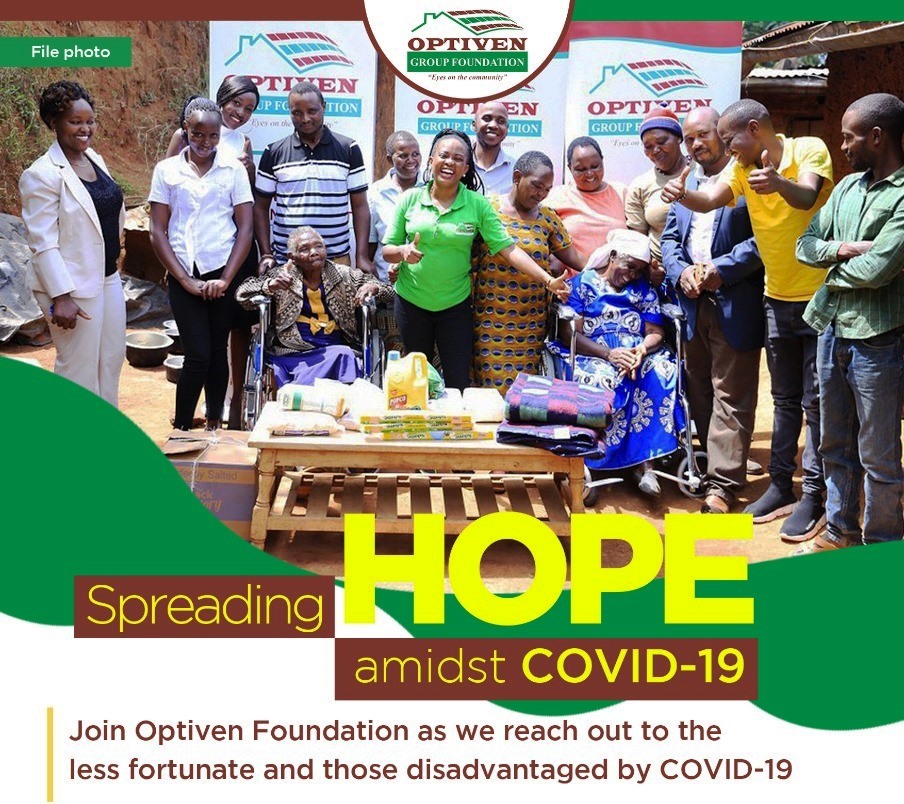 With the pandemic came rising cases of infection and other unforeseen challenges that saw the government seeking partnership with stakeholders to mitigate the situation. Optiven Limited was among the first respondents with the company donating a quarter of a million to the national kitty. Wachiuri says, “as an investor in business in Kenya, Optiven felt this was our call to make a difference.

We believe in what the taskforce is doing to better the situation”. Through the award winning Foundation, the company has in 2020 continued to offer psycho-social support while adhering to the Ministry of Health and World Health Organization recommendations on engagement.

5 Key Facts On the Lifting of the Lockdown

Quote: “I urge all Kenyans to take personal responsibility and avoid unnecessary contact”.
Uhuru Kenyatta, President of the Republic of Kenya
6/7/2020

I rose after my many falls

I quit computers for my passion in beauty industry

Nick Mutuma: I do romantic movies for my female admirers