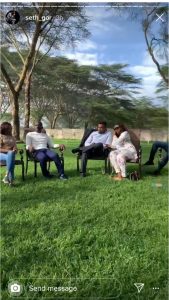 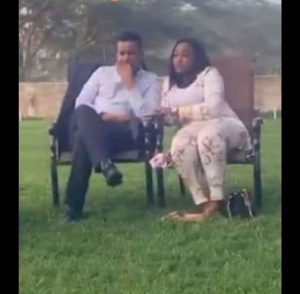 Kenyans are a peculiar lot.

They will find humour in anything. This time round it is in Eliud Kipchoge’s designer outfits that he wore in his article in the GQ magazine.

The outfits are being sold at a super exorbitant fee, the highest priced of them all gojng for a little over Ksh 500,000.

Check them out below.

“It took him 6 years to put a ring on my finger” actor, Abel Mutua’s wife opens up

Former Tahidi high actor, Abel Mutua impregnated his then-girlfriend Judy Nyawira while both were still in college and the experience was rocky.

The college sweethearts have proudly shared the last 12 years in each other’s arms, roofing a daughter, now aged 10 years.

However, the birth of their daughter changed their lives.

During a Q&A session with the actor’s wife, Judy, Instagram fans delved into the couple’s marital life.

What was your experience marrying Abel?

Mrs Abel admitted that despite having sired a child together, Abel was not ready to settle down and it took him 6 solid years to make an honest wife out of her.

Even though the entire journey started off in an odd manner, the years are unregrettable for them.

Well, first came the baby then the long wait of almost 6 years before he could make up his mind about settling down. Thank God he did though with a proposal ndani ya gari…’Eeeh, babe tunaeza oana sasa?’ And here we are 12 years later.

Well, it has been 10 years and fans probed about baby number two. Judy responded:

It’s never a smooth road! It has its good and bad days.

Previously, the youthful production mogul revealed that their daughter’s birth caused them trauma.

The birth of our daughter traumatized us so much because we were not doing well then, and that is why we have not had a second child yet.

Reiterating the same, Judy Nyawira felt one was enough for them for the time being.

Never! That ship already sailed but it’s by choice. One is enough aki, for us. It was a mutual decision.

On what captured her interest in the scriptwriter, Judy blatantly admitted:

The popular Kenyan actor who has made a name for himself in the lucrative industry had in the past opened up on leading a strenuous life that rendered him unable to afford basic needs.

So bad was it that Nyawira was the one who cleared the bills, catered for food and his clothing.

I was so broke to the extent that I couldn’t afford to buy my underwear. It is my wife,who was buying me innerwear at the time. I may not have much (financially), but one thing I am thankful for, is the good wife God gave me.

In a string of photos which have since surfaced on social media, Kipchoge can be seen rocking afro fashion outfits as he pulled incredible poses for each shot.

In one of the photos, the legendary marathoner sports an all-black 70’s bell bottom trouser, complete with a Nike top which he harmonizes with a pink blazer.

So bold he was with his latest style that he, in a different shot, settled for a multi-coloured suit by Ermenegildo Zegna which he wore with Gucci shoes.

In another, he appears to give musician Stivo Simple Boy a run for his sense of fashion as he donned cream shorts by Fendi Men’s which he complemented with a two-button coat and a white shirt.

A spot check on how much the outfits cost established it would set one back huge bucks to attain Kipchoge’s distinctive appearances.

The 35-year-old’s classical look has seen thrilled Kenyans take to social media hail the marathoner, with some hilariously suggesting the long-distance runner was misled.

Story of Coronavirus patient who recovered raises many questions among Kenyans

Technology is the Silver Lining on the Pandemic’s Dark Cloud

Tuju: I expect to be working by next week

Only 100 to attend Ndingi’s funeral

US tops world in coronavirus cases

VIDEO: How 300 Diaspora Kenyans are investing in a state-of-the-art Kitisuru Amani Gardens Project

Man kills brother after catching him having sex with their mother