President Uhuru Kenyatta has carved a niche as one of the most outgoing and easy to relate with head of state.  Kenyatta has surrounded himself with various friends and close allies, from politicians, musicians and school mates.

Herein are over ten people he hangs out with during his private time, demonstrated from secret meetings, personal phone calls and close relationships.

ODM leader Raila Odinga’s relationship with Kenyatta has a long history, from family ties to political feuds. However, the two usually insist on being close friends and ‘brothers’.

The Building Bridges Initiative signalled how close they were, from a series of private meetings that ended the tensions that arose after the controversial 2017 General elections to several meetings to chose Cabinet Secretaries and initiate changes in Parliament.

In June 2020, Kenyatta reportedly chartered a private plane for Odinga to undergo surgery in Dubai. The plane reportedly cost Ksh 1 million per hour.

Jimmy is the son of former President Mwai Kibaki. He attended St Marys High School where they became great friends with Kenyatta after they were punished by an Irish priest at the school.

In 2016, Jimmy recalled the incident and reiterated how close the two have been ever since.

The Kibakis and Kenyattas have maintained a close relationship since before independence. Mwai Kibaki is Kenyatta’s godfather and suggested the name Uhuru when the President was born in October 1961.

Interior CS Fred Matiang’i was elevated by Kenyatta who delegated him to take charge of Cabinet meetings in 2019. Matiang’i is also one of the most trusted CS within Kenyatta’s cabinet.

The CS has been at the forefront of pushing the President’s agenda and has been severally accused of staging witchhunts against DP Ruto allies.

In June 2019, Kenyatta broke security protocol and drove off with Odinga and Matiang’i to Kisumu Yacht Club for entertainment.

He is the son of former Chief Justice, the late Kitili Mwendwa.

Maluki met Kenyatta in Mombasa while the President was visiting his father Mzee Jomo Kenyatta. Maluki’s father was a close aide of Kenya’s founding President.  The head of state and Maluki, who tried his hand in Ukambani politics but lost in 2017, remained close friends.

He is the Deputy Chief of staff at State House, a position he was promoted to after serving as Solicitor General.

Muturi is also an alumnus of St Mary’s School and is a key figure in the President’s political career. He served as Kenyatta’s personal assistant for 11 years, before joining the public service.

He is the owner of Galileos, a popular entertainment joint in Nairobi. A source who spoke with Kenyans.co.ke in December 2019, detailed that the Kenya National Chamber of Commerce and Industry (KNCCI) President is a close ally of Kenyatta.

The two meet privately for social engagements together with other members of his ‘boys club’, from time to time.

“President Uhuru Kenyatta is my close friend and we speak from time to time. If I get hold of him, I’ll ask him not to push for constitution change but to provide for Kenyans. When he retires, we can hang out and enjoy some good time in our county Kiambu,” former Kiambu Governor William Kabogo stated in an interview with comedian Felix Odiwour (Jalang’o) on June 19.

The two met in Mombasa during their childhood.  Kabogo’s father was a senior civil servant at the coast and a close confidant of Mzee Kenyatta. 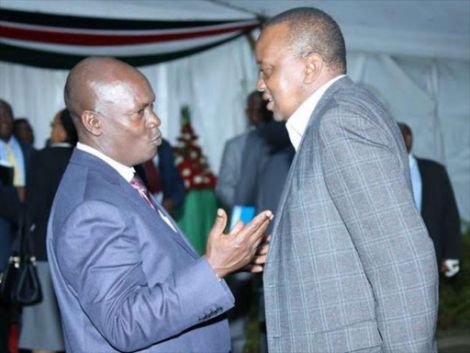 Kenyatta and Gideon Moi have maintained a long-standing friendship, brought about by their family and political ties.

The head of state was the key figure at the funeral of Mzee Daniel arap Moi, Kenya’s second President in February 2020. During the funeral, he disclosed how the two were maintaining their friendship.

Gideon Moi’s KANU also signed a pact with Kenyatta’s Jubilee and analysts argued that he was poised to succeed the President. Gideon’s relationship with Kenyatta served the latter’s friendship with Deputy President William Ruto, who is seemingly isolated from government.

He is the owner of outdoor advertising giant Magnate Ventures.

The entrepreneur is among President Uhuru Kenyatta’s close friends, whom he hangs out with in private and was a formidable force behind his 2017 re-election.

He was one of the members of the Friends of Jubilee Foundation that was hell-bent on coming up with funds to oil the Jubilee Party’s bid to retain power.

Jubilee Vice Chairman David Murathe has been accused by several politicians of purporting to speak on behalf of the President. Murathe is one of the key figures in the head of state’s circle and a BBI proponent.

Murathe served as chairman of the Uhuru Kenyatta (UK) Centre which campaigned for Kenyatta in 2013. He was also the brainchild behind Kenyatta and Ruto’s union and he is the same force blamed for their divorce with Ruto’s allies.

After the death of popular Kikuyu musician John DeMathew in August 2019, Kenyatta called Murathe to confirm the sad news, after the head of state was notified of the artist’s demise by media personality Njogu wa Njoroge.

Njoroge detailed that he called Kenyatta at midnight to inform him that DeMatthew had passed away after being involved in an accident.

“That is when I learnt how Uhuru held DeMathew close to his heart. He flew into a rage and asked ‘what are you talking about? Do you understand what you are saying?,” Njogu narrated.

Kiss FM presenter Felix Odiwour has severally spoken on how he and Kenyatta have hang out. Jalang’o once called Kenyatta on a live interview to prove that he usually speaks with the head of state.

In 2017, Jalang’o  recalled his experience when he rode in the back of President Uhuru Kenyatta’s vehicle adding that he regretted never asking for a favour.

“I didn’t ask for anything. I really regret. Alikuwa anadhani mimi niko na pesa bwana. Saa hiyo mimi nilikuwa nimesota ile mbaya. (He thought I was rich, but at the time I was very broke),” the comedian recalled while speaking with Citizen TV anchor Jeff Koinange during a morning show at Hot 96 FM.

Ukiachwa achika! “I don’t know why Betty keeps speaking about my relationship with her” – Pastor Kanyari

The couple has two kids who are just popular as them and their daughter Ladasha Wambo is the number one celebrity kid with many flowers on social media.

Size 8 and DJ Mo’s daughter has featured in quite a number of adverts among them Softcare diapers and a detergent called Kleesoft together with her parents.

She is making good money at a young age.

The couple is investing heavily in the future of their children and while advising a guest couple, who want to spend Ksh 2 million on their wedding on the Dine with the Murayas show on Monday, Size 8 said,

Meaning per year they save 1.2 million for their kids’ education fund.

DJ Mo’s wife went ahead to advise the couple to invest wisely.

Shakilla has found her way into Eddie Butita’s DM and Mammito is not ready to entertain such nonsense. This comes shortly after the socialite confirmed that not even a TV remote is safe around her!

I mean if she can work with that which is plastic; imagine what she would do to Mammito’s man who is human?

Anyway, Butita who will continue entertaining fans with his jokes went on to share a screenshot from Shakilla who reached out looking to work with him; or work him depending on what her plans are. She went on to text him,

But having come across her live session with Xtiandela, all Butita could do is jokingly ask for prayers. He went on to caption the screenshot saying;

Mammito not ready to lose Butita

Judging from how scarce good men are, Mammito could not let this young socialite near her man. Responding to the post shared by Eddie; Mammito went on to drop a hilarious comment where she wrote;

Of course this came as a joke – but on a serious note! I’m quite confident that no lady would feel safe with a woman who can ‘swallow’ a remote; and still act like this is a normal activity!

However, welcome to Nairobi where money is more important than image!

Wanyama speaks after socialite claimed he paid Sh700,000 to sleep with her

Montreal Impact player Victor Wanyama has issued a statement after a socialite named Shakillaa claimed to have had an affair with football star.

In his statement, Wanyama said he has never met the socialite, and the video circulating contains false allegations aimed at scandalizing his reputation.

“My attention has been drawn to a video circulating online containing false, fabricated and insulting allegations aimed at scandalizing my good name and reputation. I wish to distance myself completely from the contents of this defamatory video.

“The allegations made therein are a total fabrication and a figment of the maker’s imagination at best. I have NEVER met any party in the video. I strongly condemn the actions of both the woman in the video and the publisher of the video Arthur Mandela via his Instagram account @Xtiandela for encouraging the disparagement of character of individuals based on false accusatory statements,” read part of his statement.

Wanyama said that the creators of the video intended to boost their online presence using the video, and that he has instructed his legal team to pursue all legal remedies available.

“I have worked long and hard to build my character and standing in the society. Such Malicious, scandalizing and false assertions about my name and character are unacceptable to me, my family and institutions who have placed great trust in me.

“I am prepared to any great lengths to protect my name and character. Consequently, and with the blessing of my management team, I have instructed my legal team to pursue all legal remedies available to me and to which I have unreserved right to seek,” he said.

The statement came shortly after Shakillah, during an Instagram live interview with Xtian Dela claimed that she had, had an affair with a number of Kenyan celebrities, including; Otile Brown, Victor Wanyama, Willy Paul, KRG The Don, Brown Mauzo, Khaligraph Jones and Ringtone among others.

‘I have never met her!’ Victor Wanyama to sue 19-year-old socialite and Xtian Dela