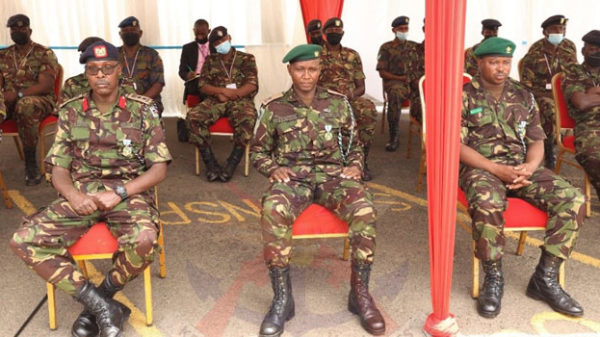 The US military has recognized three Kenya Defence Forces officers for their courage and action when a US military station in Manda Bay, Lamu County, was assaulted by Al Shabaab militants,

Investigations into the January 5, 2020 event, which killed one US soldier and two defense contractors, were concluded and revealed that the attack was caused by the US soldiers’ incompetence.

According to a report delivered to the US Pentagon, three KDF officers assumed leadership of the situation on their own, while US soldiers at the camp were taken off guard and struggled to comprehend the onslaught.

The KDF commanders were able to launch a response using their abilities and soldiers while waiting for US reinforcements, which took about an hour to arrive.

“Certain (US) senior officers contributed to the inadequate force protection posture at Manda Bay, and allowed a climate of complacency and poor understanding of the threat,” read the report delivered by General Stephen J Townsend, the commander of US Africa Command.

The account, which demonstrated the KDF’s unrivaled gallantry, contrasted sharply with a New York Times piece from 2020, which said that Kenyan troops hid in the grass during the attack.

Colonel Rotich, who was the Deputy Commander of Operation Fagia Msitu at the time, was praised for his technical prowess in orchestrating air-to-ground support during the deadly militia battle.

He was in charge of the McDonnel Douglas 500 Defender helicopter mini-gun engagements, which shifted the tide of the fighting between US troops and the KDF against the militants.

“Colonel Rotich’s superior leadership, technical and tactical abilities, coupled with his dedication to duty and selfless service were critical in the defeat of a platoon size element of the terrorists,” read part of his citation.

Major Muthaura got the medal for his ability to gather a platoon-sized portion of his troops and provide one unit to help the US forces at the airfield as the Alpha Company Commander of the Kenya Ranger Regiment.

He led another group into the bush that surrounding the airbase and attacked the terrorists without regard for his own safety, clearing the perimeter of all enemy soldiers.

“Major Muthaura’s superior leadership, courage under fire and dedication to duty were critical in the defeat of the terrorists who attacked the airfield at Manda. His leadership during the engagement changed the momentum of the firefight between the US and KDF against the terrorists,” part of his citation read.

Corporal Shikuri, on the other hand, was recognized for his commitment to duty and willingness to defeat the enemy. His contributions were crucial in the terrorists’ defeat. Even after being injured, he showed amazing initiative and bravery during the attack on the terrorists.

Major General Anderson complimented the three soldiers for their collaboration, valor, and confidence in confronting the militia during the attack during his speech at the award ceremony.

“You kept yourself on the frontline to protect others and save your nation. This is indeed commendable and we thank you for your courage and bravery,” said Major General Anderson.

How Korea’s skills will benefit Konza