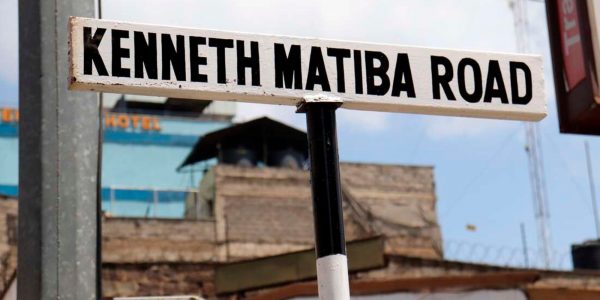 This comes barely two weeks after the Nairobi County Assembly passed a Motion to rename the road after the veteran politician, three years after his demise.

On Tuesday, Roads and Transport Executive Mohammed Dagane supervised the works at the CBD where the road sign bearing the late Matiba’s name was erected to replace the existing one.

This is now the third road to be renamed in the capital city this year alone.

In February, Kapiti Crescent Road in South B was renamed in honour of the late football legend Joe Kadenge.

In the Motion by Nairobi Central Ward MCA Daniel Ngegi, the county legislators unanimously agreed that having the road named after the second liberation icon will be a fitting tribute to a man “who sacrificed his life for a better Kenya”.

While approving the Motion, the MCAs raised concerns that despite the late Matiba’s immense contributions to the country, there was nothing in his honour.

Mr Ngegi said that Mr Matiba’s contributions to the multiparty democracy the country currently enjoys cannot be gainsaid and having Accra Road renamed Kenneth Matiba Road would go a long way in having his name remembered by generations to come.

He pointed out that the former Kiharu MP and 1992 presidential candidate also left an indelible mark in the hospitality and education sectors and was an accomplished public servant having served as the first African Permanent Secretary (PS) for education in 1963.

Mr Matiba also served as PS for commerce, chairperson of the Kenya Football Federation between 1974 and 1978, Minister for Health, Culture and Social Services; and Transport and Communications.

Mr Ngegi went on to describe Mr Matiba as a modern-day freedom fighter who fought for the freedom of the country from the clutches of the dark days.

He said Accra Road played a significant role during the clamour for multipartyism in the country by acting as a place of refuge for the late Matiba during the Saba Saba days as he would use Accra Hotel, owned by the late Nairobi Mayor John King’ori, to regroup and re-strategise after being clobbered and teargassed at the Kamkunji Grounds.

He explained that renaming the road would also serve to reunite two allies and second liberation heroes, the late Matiba and Charles Rubia.

“The two gentlemen were only separated by death and it is very unfortunate that they did not live long enough to enjoy the fruits of what they fought for,” said Mr Ngegi.

Kayole Central MCA Jeremiah Themendu and nominated MCA Kabiro Mbugua concurred with Mr Ngegi saying that the late Matiba risked his life for the betterment of the country so that Kenyans could enjoy their freedom.

Kilimani MCA Moses Ogeto said it was unfortunate that the late Matiba has not been honoured although most of his contemporaries have received such privilege.