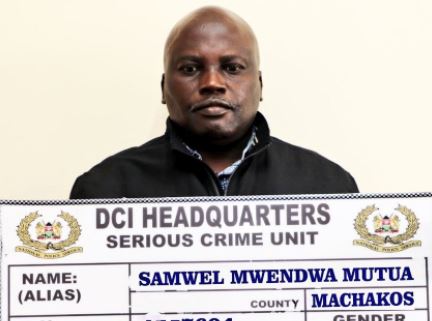 A 50-year-old man accused of defrauding a nursing home Kshs948,000 has been arrested by detectives from the DCI headquarters.

Samuel Mwendwa Mutua, who is said to be the owner of a company that trades as World Freight Logistics Limited, is accused of failing to deliver hospital equipment belonging to St Joseph Maternity and Nursing Home that were procured through his company.

The hospital is located in Molo sub county in Nakuru county

The equipment included hospital beds, mortuary equipment, theatre beds and a dental chair which were to be shipped from China.

According to DCI, the suspect was paid the whole required amount in bits but failed to deliver the equipment as required and engaged his clients in cat and mouse games.

The hospital is said to have first paid Samuel Kshs407,000 for freight charges after the China-based vendor consolidated the shipment into a 40-feet container and settled it on Oceanus International Logistics (Shenzen) Co. Ltd as guided by the suspect. The first payment was made on November 6, 2020.

Samuel later received Kshs158,200 from the hospital on December 8, 2020, as payment for shipping line charges and container deposits.

“It was after receiving the entire amount of Sh948,200 that the suspect decided to go under, after a series of false promises that his company would deliver the goods at the hospital’s facility,” DCI said.

The hospital was forced to report the matter at DCI’s Complaints Directorate after learning that not only had the suspect defrauded them, but also had their shipment auctioned on overstay grounds at the Embakasi ICD.

“Investigations conducted by the DCI established that having received the Sh948,200 from the hospital, the suspect neither paid the freight charges to Oceanus Co. Ltd, rent to KPA nor the container deposits,” DCI said.

“Further, swift transfer forms presented by the suspect alleging to have paid USD 3275 to the China-based company as freight charges was found to be fake,” DCI added.

The DCI has now requested members of the public who have fallen prey to the suspect’s antics to report the matter for legal action.

The suspect will be arraigned and face charges of obtaining money by false pretences and forgery/making a document without lawful authority.

Related Topics:NewsSamuel Mwendwa Mutua
Up Next