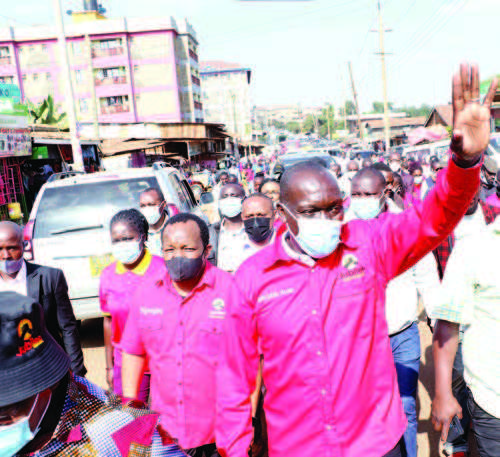 The supremacy battle between President Uhuru Kenyatta and his deputy William Ruto has taken the centre stage in the Kiambaa by-election scheduled for Thursday.

Unlike the Juja by-election last May where the hit hero little known People’s Empowerment Party (PEP) in which the President played no significant role, Uhuru has taken personal interest in the Kiambaa poll whose campaigns ended last night.

While Ruto, who has fallen out with his boss is keen to score a major victory and return a strong showing in the President’s backyard, Uhuru is keen to avoid what could be easily characterised as an embarrassment in his Kiambu heartland.

Kiambaa seat fell vacant following the death of Paul Koinange, a relative of the President who chaired the powerful National Assembly Committee on Security and Administration.

Njama, who is making a second stab at the seat, has invested the manpower of sitting and former MPs as well as supporters, who had pitched tent in the area while the United Democratic Alliance (UDA) candidate Njuguna wa Wanjiku, who is making a debut in politics, enjoyed financial support and planning from Ruto’s camp.

Sources told the People Daily that Uhuru is said to have instructed leaders allied to Jubilee “to bring him nothing short of victory in the Kiambaa by-election as a sign that he is a force to reckon with in Mt Kenya region”. The sources said the Head of State’s political office helped coordinate the campaigns which the President closely monitored. The office is also said to have played a key role in disbursement of finances to ensure transparency as well as helping in crafting the campaign strategy.

“He has been keen on this campaign more than before. He also has his eyes on the activities through his political office. It is that office that was releasing money and doing thorough audits to ensure the cash was spent prudently,” a key operative said yesterday.

At the weekend, Kiambu Governor James Nyoro said at a rally that voting for Njama will signify that the President commands respect and influence in the region.

“Voting for the Jubilee candidate will mean acknowledging the good work President Kenyatta has done for Kiambu and the country at large. We need to support the choice of our President. Njama’s win will be a win for our President, who is also our political kingpin in Central Kenya,” said the governor.

Dr Richard Bosire, a Political Science lecturer at University of Nairobi, said that given the outcome of the Juja by-election, Uhuru was keen not to experience another defeat in his home turf. On the other hand, Ruto is keen to use the mini-poll to gauge his influence in his boss’s backyard.

“Performances in by-elections normally send strong perceptions to big parties like Jubilee and even new parties. Ruto wants to use the by-election as evidence that UDA is a formidable party that will win seats in 2022,” Bosire said.

He added: “On the other hand, Uhuru is concerned about his legacy and differences with his deputy and is ready to spare no effort to win and that is why he (Uhuru) played a central role in the campaigns not just through financing but also in their management. If he wins, he will have something to say and even celebrate, but if he doesn’t he will be injured which I am sure he is not ready to see happen.”

Njoroge (The New Democrats), Evans Gichia (People’s Party of Kenya), Dr Lucy Wanjiku and David Mugo (both Independent). Njama and Njuguna have dwarfed them with their well-oiled campaigns.

After the Juja by-election, an unhappy President is said to have reprimanded a principal secretary, some top civil servants and leaders who were in charge of the campaign. Sources intimated that some money disbursed for the campaign never reached the intended targets.

And in the Kiambaa mini-poll, the President is reported to have midwifed a change of strategy to ensure transparency in the resources and organised campaigns in favour of Njama to ensure his party recaptures the seat.

Alleged favouritsm by Jubilee where it ended up with a weak candidate and disorganised campaigns by weak figures were cited as some of the reasons it lost in the Juja by-election. Jubilee’s Susan Njeri, the widow of former area MP Francis Waititu alias Wakapee, lost to George Koimburi, a diehard Uhuru supporter who was forced to move to PEP after he became apprehensive that the ruling party would rig him in favour of Susan, a greenhorn who was making a debut in politics.

While Koimburi had the advantage of his close to four-year network and popularity, Susan’s campaign was led by Governor Nyoro whose administration is in sharp focus over service delivery to Kiambu people.

A section of politicians had voiced reservations about the involvement of some Kiambu leaders in the Kiambaa poll.

County Woman Rep Gathoni wa Muchomba, who was involved in the Juja campaigns before decamping to UDA, has also been facing considerable hostility on the ground.

Other candidates in the race are Isaack Karomo Mucugi (Federal Party), Richard