A calling that identical twins could not resist 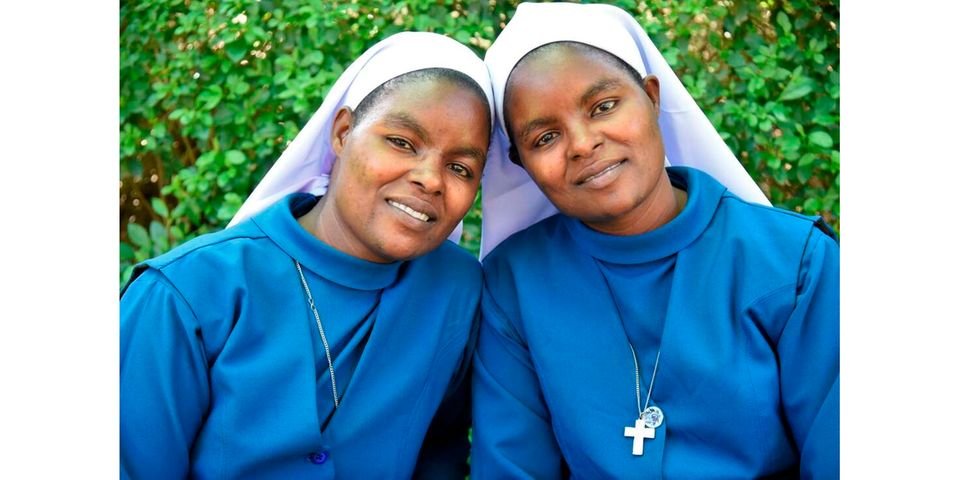 Inside the impressive Sacred Heart of Jesus Cathedral in Eldoret, two nuns who are a mirror image of each other and with seemingly synchronised movements pause in front of the Marian grotto image, kneel and say a short prayer before performing the holy cross sign.

Dressed in a blue habit and white veil, it is difficult to tell them apart. That’s because the two Catholic nuns, Mary and Florence Kariuki, are identical twin sisters, who would not be separated in their decision to serve the Church.

Born on November 28, 1992, the identical pair attracts constant attention—with some people staring in amazement at what they say is a miracle — whenever the sisters step out to perform religious duties. 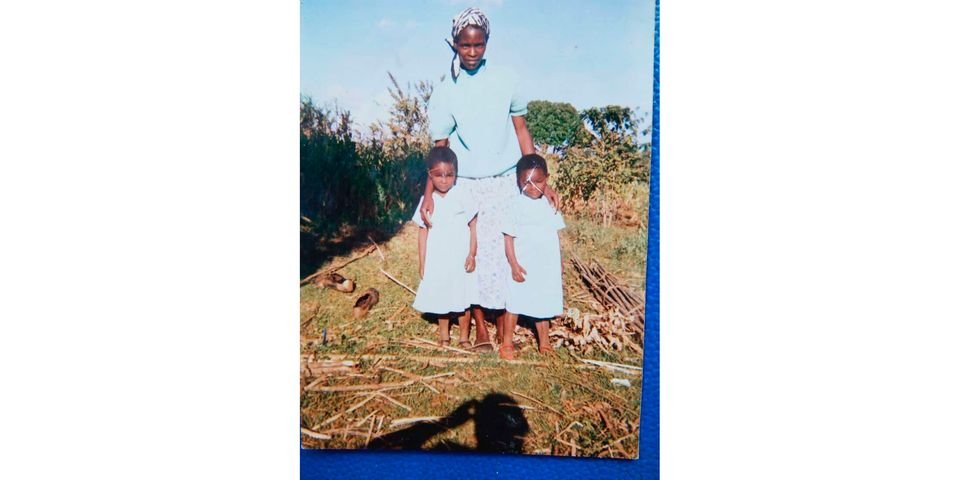 With similar mannerism, an interaction with the Junior Catholic sisters will leave one mystified by their likeness, including uttering the same words simultaneously.

“Even our own father, James Kariuki, has difficulty telling us apart,” say the two simultaneously in response to a question by Lifestyle before bursting out laughing.

They have, on many occasions, used the resemblance to prank their unsuspecting father, enjoying the moment each time.

Their mother, Gladys Kariuki, despite years of bringing up the adorable pair, has also endured comical moments telling her daughters’ voices apart or even guessing whether they are together or not when they call her on the phone.

The strong bond between the two is unbreakable and having light moments with their parents is something the identical twins enjoy. 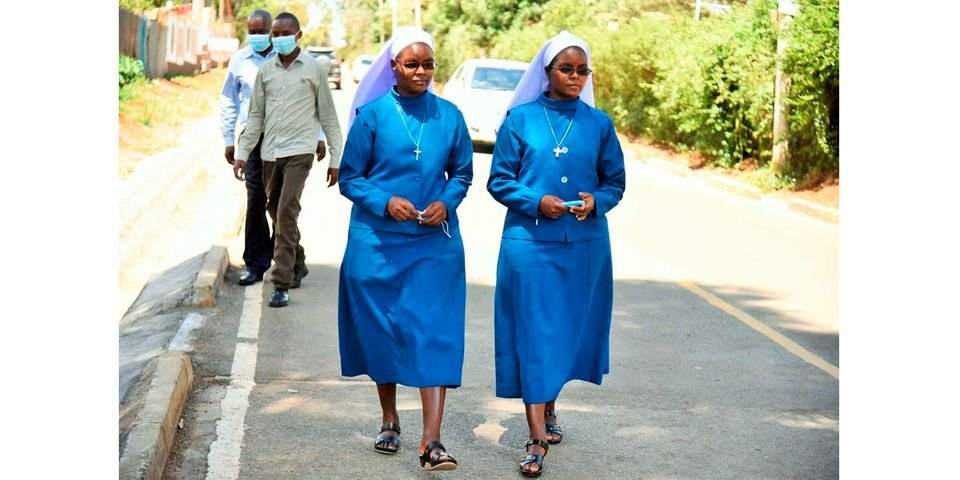 “Our mother has to inquire first who is calling to ascertain the voice. On countless times,” says Florence.

But it gets even more intriguing, she adds: “We have in the past dialled her phone almost simultaneously even when we are not together. And guess what? We discuss the same topic with her.”

The strong bond between the two is unbreakable and having light moments with their parents is something the identical twins enjoy. 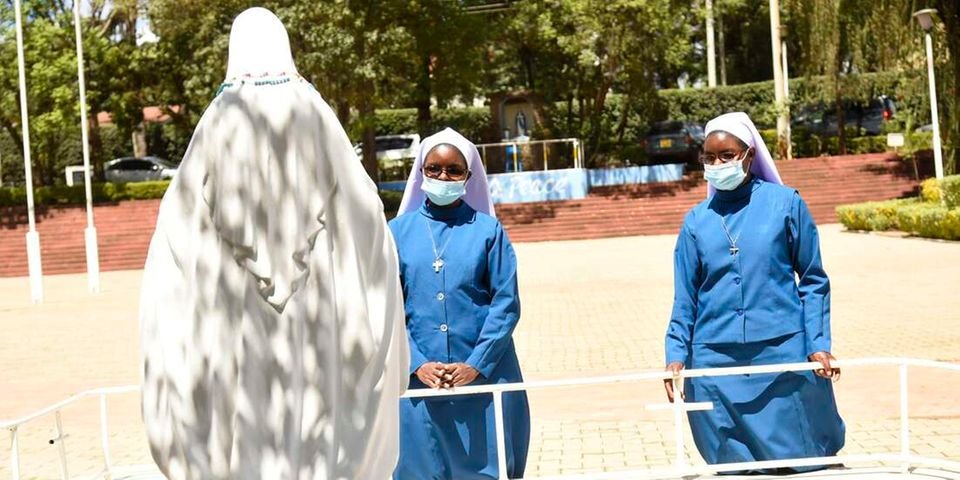 What about them phoning each other at the same time? It has happened countless times, they say.

The connection saw the pair buy the same smart phone brand without even discussing it beforehand, fit the gadgets with a similar back cover and Marian devotion photo.

They only established that they had bought similar phones, fitted the devices with similar features while on a visit to their Kirinyaga backyard.

“For me, it was a bit weird. We bought the phones within the same month and settled for similar features. It was puzzling,” says Florence.

The telepathy again played out after the duo developed eye problems While Sister Mary was in Nairobi, her sibling was in Eldoret. The psychic correlation saw them settle for similar glasses with brown thick lenses.

“When we went home to visit, I realised my sister had bought similar lenses. Even for us sometimes it is also flummoxing,” says Sister Mary.

During the interview with Lifestyle, they were unconsciously browsing the same page, where a colleague had lost her mother.

The two nuns from Kirinyaga County have never been apart for more than six months and their formative years were full of cheeky moments, giving their teachers torrid times.

“At one time while we were schooling in Mugwande Primary School in Ndia constituency, a teacher gave us a cane to whip each other as he could not pick out whom to punish,” Sister Florence says.

They could not fathom disciplining each other and the exasperated teacher had to forgive them. That is how strong their bond is.

Delving into a history that dates back to their younger years, the Catholic nuns remember how efforts to separate them by being assigned different classrooms always failed.

“Our teachers on many occasions attempted to keep us apart but it was always a tall order. Even in our younger age, we had to share a desk, a meal and lessons,” says Sister Mary Kariuki.

After completing Standard Eight, they both proceeded to Meru Girls in 2008 after scoring almost similar grades, — Mary slightly edged out her sister attaining 289 marks while Florence scored 284 marks.

But their stay at the school was short-lived after they lost money meant for school fees totalling Sh20,000.

“I gave my money to Sister Mary who had a pouch to keep the cash but she, unfortunately, dropped the purse inside the vehicle,” says Sister Florence.

Coming from an extremely humble background, the family could not raise extra money and their journey to the Meru School was brought to a halt.

They were forced to relocate to a school based within their locality, St Louise Secondary School, where they studied and sat the Kenya Certificate of Secondary Education (KSCE) examinations in 2011.

While in secondary school, young men eyeing a relationship had a rough time. They could not pick out who they had started a conversation with.

“Most of the time it was a vice versa affair with the young men telling me what they were supposed to tell my sister Florence thinking they were actually talking to their preferred girl,” said Sister Mary with a loud laugh. For them, it was teenage fun, toying around with young men back in their village. They were pretty sure that their admirers could hardly tell them apart. 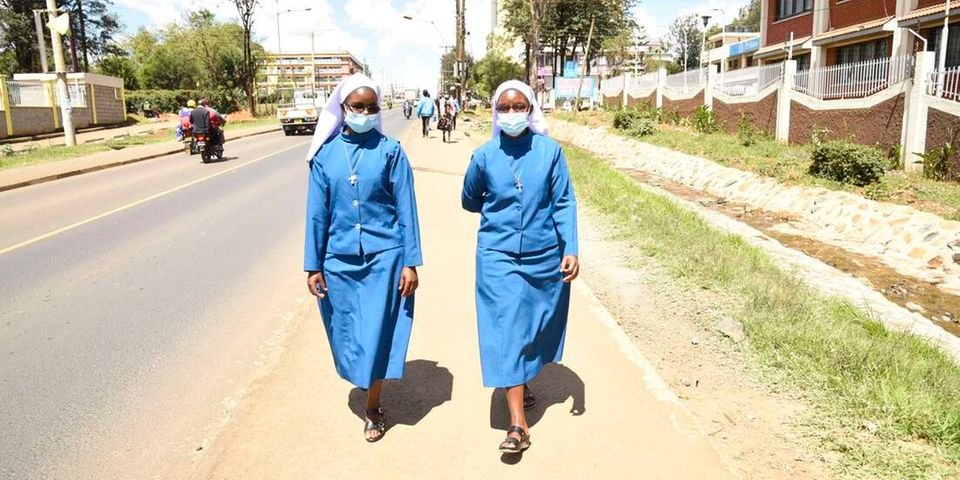 They nearly always broke the hearts of their would-be lovers, ending the mind games by revealing their true identity. However, they say that most of the time they moved around with a relative in the village to avoid attracting such unwanted attention.

Their desire to join sisterhood started while they were in primary school. Not for the first time, the twins say, they separately told their mother about this wish to serve the church but almost at the same time without consulting each other.

“We informed our mother of the desire to become sisters almost at the same time,” said Sister Florence.

But due to their tender age, their mother thought it was just “kids plaything.” “She never took the message seriously but we were determined to go all the way,” the two told Lifestyle.

At the time of making the announcement, the two were liturgical dancers and altar girls, spending a lot of time in the Church.

However, their father, James Kariuki, would hear none of it. He could not imagine the twins joining the Catholic Church sisterhood. For him it was no-no.

“Our father was livid after we broke the news to him. He flatly refused to acknowledge the direction our lives were taking, but we remained strong-minded,” said Sister Mary.

Their journey to sisterhood started in 2015 after Sister Mary visited Vincentian Retreat Centre in Thika.

During the retreat, which Sister Mary describes as the turning point, a presiding priest called out her name.

“I was shocked when Father Antony called me and revealed that he had a spiritual vision, talking of twins who ‘speak and act the same’,” she says.

She adds: “The Priest asked me to raise my hand if I was the one, but my courage failed me,” Sister Mary recalls the tense moment.

“She gave me a listening ear and invited me to Turbo for a visit. But I had a request. I would not go alone to the place. I had a twin sister whom I could not leave behind. Surprisingly, her answer was in the affirmative,” says Sister Mary. 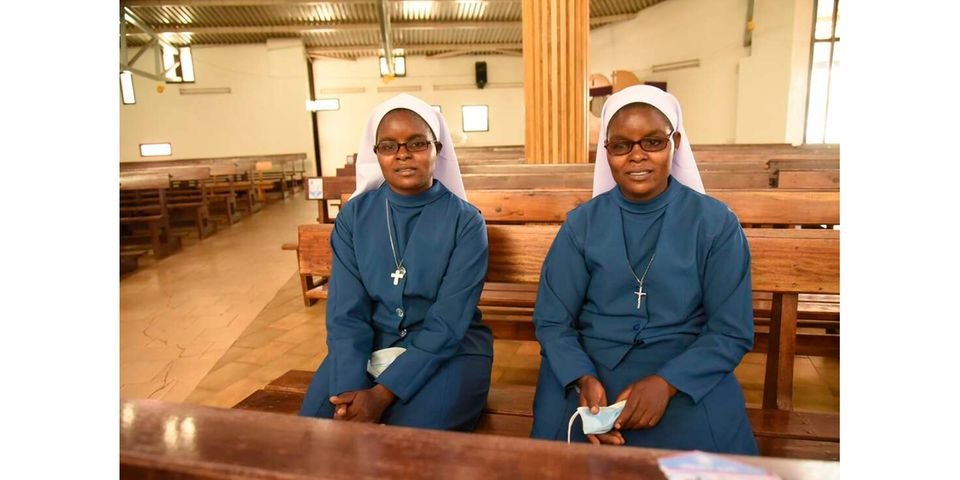 She informed her twin sister about the new development and they were both excited. With their father having mellowed, it was now a smooth transition for the pair to realise their childhood dream.

“Our father, after initial resistance, gave us his blessings. The journey towards sisterhood had begun in earnest,” she says.

The religious order or monastery involved undergoing a period of testing life for six months to two years called a postulancy.

READ ALSO  How over 10,000 Kenyans eyeing Saudi jobs got stranded

“During our stay at Turbo, we were the centre of focus from the congregants and fellow sisterhood colleagues,” says Sister Florence.

Having successfully completed the aspirancy stage, they joined The Assumption Sisters of Eldoret (ASE) and are on a journey of attaining full sisterhood in the next four years.

Indecently, the twins served at Komarock, Nairobi, while on community experience at different times.

“My sister Florence was the first one to be posted there and I later served at the same church and it was herculean task convincing them that I was Sister Mary and not Sister Florence that they were accustomed to,” she says.

“The whole church raised their voice in protest, saying I had changed my name.”

The two had to visit the church together to help convince the faithful that they were, indeed, a pair.

Eldoret-based Father Anthony Njenga, who met the Junior Sisters a couple of weeks ago, is equally mesmerised by their similarities.

“I cannot easily tell them apart. It’s a new phenomenon within the church set up, especially on sisterhood. Having twins as sisters — as nuns — is a new thing within the vast dioceses and I guess in the entire republic,” he said.

Recently, the catholic priest had the fun of his life after joining the twin nuns on a trip home. A stopover for a lunch break attracted giggles from bystanders.

“Those who saw them just wanted an instant interaction. Their identical looks and choice of career of course attract attention,” says Father Njenga.

The priest recalls an incident when the pair seated at different places inside the church, unconsciously stepped into the pulpit, belting out a similar song to the amusement of the faithful.

He says the twins have undying passion for their call, talking about commitment which has been their hallmark since joining the religious order.

Their congregation is currently raising funds with a target of Sh50 million to build a house for the Elderly Sisters who are currently retiring from the religious order.

The two are determined to see the actualisation of that dream and are at the forefront of the fund raising.

They have set a precedent which they believe other twins with a call to serve the church can emulate. For them, serving the church is a calling that they could not resist.

The twin nuns are enjoying their life to the fullest, serving in the Church as an inseparable pair.

During their free times, the pair likes listening to inspirational gospel music. Nothing can keep them apart, they say.

Related Topics:Mary KariukiNewsSacred Heart of Jesus Cathedral in Eldoret
Up Next