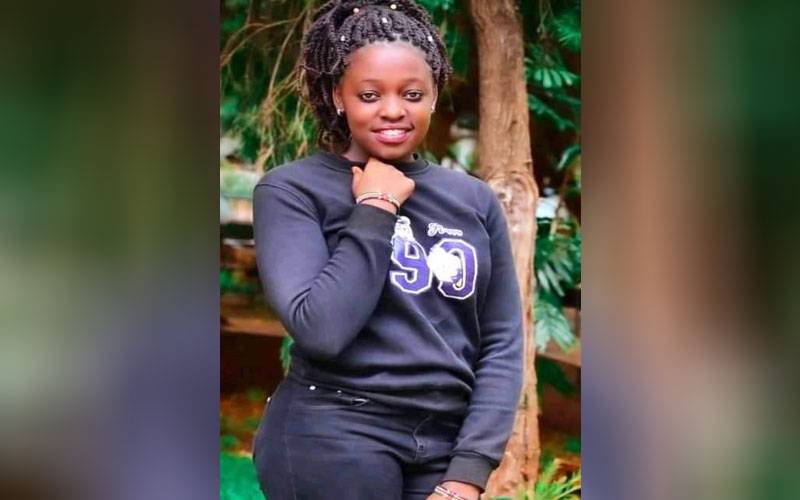 Christine Ambani was from visiting a friend in Githurai, Kiambu County on Monday afternoon, when she revealed that a meeting with her ex-boyfriend was pending.

Ambani, 23, was escorted to the Githurai bus stage by her host. That was the last time she was seen alive.

Police say the Kiriri Women’s University student was killed on the day she went missing.

Her body was found at a parking lot in Githurai and taken to City Mortuary by police.

At the morgue, her body was registered as “unknown”. Records show it was booked at 3am on Tuesday, July 13.

Christine, known to her friends as Chrizo, spoke to one of her pals until 7:30pm Monday, when her phone became unreachable.

“We believe someone wanted her dead. She wasn’t abducted for ransom, but to be killed. The time taken to end her life was too brief for people who wanted ransom. It was a plot planned over time,” a Kasarani-based DCI detective, privy to the investigations, told The Standard.

Her assailants are said to have taken control of Ambani’s phone, and were in constant communication with her family, demanding ransom.

By Tuesday 3am, she had been booked at the city morgue as deceased, but her alleged abductors were still demanding ransom for her “release” on Wednesday, July 14.

The assailants are said to have used Ambani’s WhatsApp account to communicate with her family.

“A person who claimed that my sister owed him money texted us, saying he and his friends had detained her,” Ruth Ambani, the deceased’s sister, told The Standard.

“He even sent us a screenshot of mobile money messages, which showed he transferred Sh87,000 to my sister’s mobile wallet. I believe the message was fabricated because the transfer charge was Sh300, and not Sh105, which is the transfer cost for money ranging from Sh50,001 to Sh150,000,” said Ruth, adding: “Something was not adding up.”

Ruth said the alleged abductors reached them on Wednesday demanding ransom, warning they’d kill Christine if the money won’t be sent to them by close of business. At the time, Christine had already died, as per police records.

“The person, whom we were in communication with, sent us a picture of Christine in an untidy room. The clothes she was wearing that Monday, were the same ones she was in when we viewed her body in the morgue mid this week,” said Ruth, adding: “I still don’t know who wanted my sister dead.”

The distressed sibling said out of anxiety and the need to save her sister’s life, she sent Sh5,000 to Christine’s mobile money line, which the abductors were in control of.

Detectives say they are seeking to find out where the money was withdrawn, or to which account it was transferred.

Christine’s close friend, who spoke to The Standard in confidence, said she had been in communication with the 23-year-old until 7:30pm Monday, when she stopped replying to her messages.

“What I know is that she went to meet a male friend whom I’m familiar with. However, I am not sure if the meeting indeed took place. In our communication, she contradicted herself on several occasions,” said the deceased’s friend.

Together until the end: Couple dies one day apart