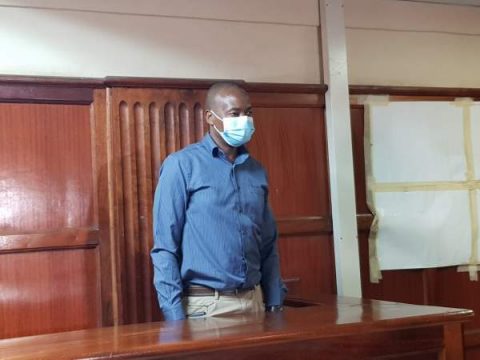 Kenya Railways Cooperation accountant has been charged with altering the parastatal’s payroll system by stopping his monthly salary deductions for three years.

Patrick Kareithi Ndegwa who was arraigned and charged at Milimani Law Courts in Nairobi is alleged to have committed the said offence between 2019 and 2021.

“You are charged that on diverse dates between July 2019 and November 2021 within Nairobi county in the Republic of Kenya, you intentionally altered the computer data in Kenya Railways Cooperation payroll system with intent to have the resultant inauthentic data to be considered as if it was authentic” the charge sheet read in part.

Patrick who has worked with the corporation for 13 years is alleged to have cost Kenya Railways an unlawful loss of Ksh317,000.

According to court documents seen by K24 Digital, Patrick had been interdicted from his duty on November 18, 2016, due to a gross misconduct that led to the loss of Ksh 1.14M of funds to the corporation at the time he was the assistant financial accountant in the parastatal.

After investigations and disciplinary by the board, Patrick was ordered to report back to work on November 13, 2017, but he was to pay 50% of the amount which was misappropriated.

“The suspect was surcharged Ksh571,991 and the monthly deductions were to be Ksh5000 until the completion of the payment,” the police report read in part.

The deductions went well until the January 2020 when the suspect started to interfere with the corporation payroll system to subtract the amount he had been ordered to pay from Ksh406,000 to Ksh12,500.

After investigations, it was established that the suspect had used his laptop to access the corporation payroll system.

Patrick pleaded not guilty before Nairobi Senior Principal Magistrate Bernard Ochoi and was granted a cash bail of Ksh200,000.

Related Topics:NewsPatrick Kareithi Ndegwa
Up Next

Teacher in naughty step after subjecting minor to child labour

Why woman sought police protection after death of her friend