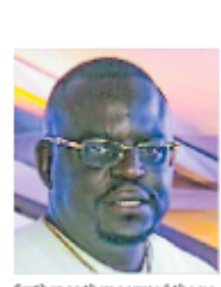 Chaos erupted along Moi Avenue in the Nairobi central business district on Friday afternoon, after a security guard and a passer-by were hit by stray bullets.

Witnesses claimed the shooter was actor Ainea Ojiambo. They said he had been walking down the street when he was accosted by three thugs who wanted to snatch his gold neck chain.

Unknown to the criminals, the actor had a gun, which he immediately drew and aimed at them, causing them to scamper for safety, the witnesses said.

In the brief melee that followed, two gunshots were heard. The first bullet hit the security guard’s left eye, as he manned the entrance to Cubes exhibition stores. The passerby was shot in the ribs and was quickly carried into Kassangas music shop a few metres away from the scene of the shooting.

It was said that the actor, a self-proclaimed lover of gold, had aimed for the thugs who had run towards the security guard, but missed.

“He pushed one of the men, pulled out a gun and tried shooting the thugs but unfortunately, the first bullet hit the security guard, who was seated at the entrance to exhibition stores, while the second bullet hit another man who was walking by,” a source said.

The three thugs ingeniously escaped through an alley leading to Government Lane.

Police did not confirm the witness accounts.

By the time the Nation arrived at the scene, the security guard was lying in a pool of blood, writhing in pain.

READ ALSO  The Journey Of A thousand Miles From Tampa, Florida To Huntsville, Alabama.

Angry onlookers had by then circled Mr Ojiambo, threatening to beat him up, but he was protected by police officers who took him to Central Police Station.

This angered the members of the public further as they accused the police of focusing on rescuing the actor, leaving the bleeding security guard at the scene.

A protest ensued, with boda boda riders and others accusing police of “securing the suspect”. It was then that the officers lobbed teargas canisters to disperse the crowd.

“Why couldn’t they have left the suspect with a few of their colleagues and rushed the victim to hospital? The police station is less than a kilometre away. They should have sent another car to take this actor to the station,” a witness told the Nation.

The security guard remained at the scene, bleeding, for about 20 minutes before an ambulance arrived. The passer-by was also taken from the music shop and rushed to hospital in a Nairobi County ambulance.

Lawyer Cliff Ombeta, who was present at Central Police Station, confirmed he was representing Mr Ojiambo in the matter but said they were still not sure what he would be charged with.

“We have to know of the victims’ health status before we are sure of what charges my client will be facing. Let us give it time for now,” he told the Nation.

There were rumours that the victim had died and that his body had been taken to City Mortuary but a senior officer at the morgue told the Nation that they had not received any victim of a shooting.

“We have not yet recorded such an incident. Had the guard been brought here, we would have easily identified him because they have uniforms,” the officer said.

The health status of the guard, who was identified only as Phillip, was yet to be confirmed by press time, with the police remaining tight-lipped on the matter.

He has been working with the Carewatch Security firm for a “few years”, a colleague of his, identified only as Rose, said.

‘Money talks then it says goodbye’, is the best lesson I got from my dad