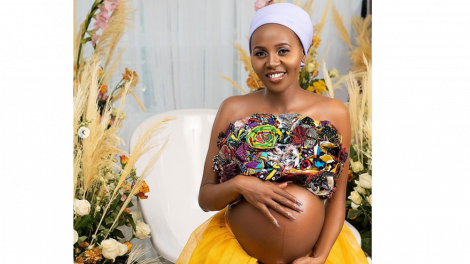 The model caused a stir recently after posting controversial photos flaunting her huge baby bump in a revealing attire, despite the Akorino faith being known for its strict doctrines.

Priscilla shared a beautiful photo while posing during a maternity photoshoot with her baby daddy and captioned it, “Mum and Dad”.

The beauty queen, who is also a makeup artist, unveiled the baby bump photos on her Instagram page while announcing to her fans that she is heavily pregnant.

Last year, during an interview with Nairobi News, she revealed that she will soon get off the singles market, at least if everything went according to her plans, and it seemingly went so.

The stylish model, during the interview, revealed that men seemed to fear approaching her as she would have loved, especially fellow members of her Akorino faith.

“If I have to be honest, I’m at a point in my life where I need to settle down. I don’t want to get to my 30th birthday without having ticked this box. I’m yet to find my perfect match. Not so many men approach me more so the Akorinos. Maybe they feel intimidated by me,” she said then.

She has worked with several celebrities and is a model, an actress on Inooro TV and also runs her Carey Beauty shop on Koinange Street in Nairobi’s Central Business District.