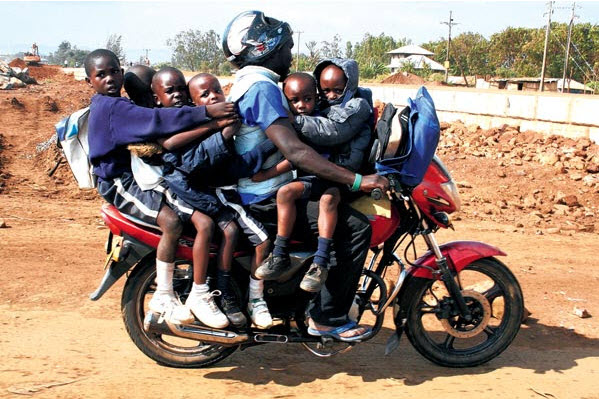 Although it is a frequent saying in Nairobi, “Mtu wangu wa boda boda” is already causing jitters.

Some parents in Nairobi are sincerely worried about the unchecked use of motorbikes to transport young children (under 10 years old) to and from school without an assistant, claiming that doing so poses a serious risk to the ‘infants’.

Parents and guardians who depart for work early in the morning and return home well after dusk are typical working Nairobians who follow this tendency.

The issue is that the majority of schoolchildren are frequently too young to ride securely on a moving boda boda.

One parent who spoke with a local media station brought up an incident that happened near the Manyanja Road Roundabout, where a matatu almost killed a lady and her two children riding a motorcycle.

The rider carrying the family became trapped between the matatu and the circular island while attempting to pass a matatu that had slowed down to pick up passengers.

The rider struck the concrete with great force, scattering his passengers across the rough tarmac.

For a good five minutes, the children’s piercing cries filled the air as bystanders scurried to rescue the defenseless kids off the runway.

The mother and her two children, who were roughly between the ages of two and four, each suffered wounds. They had good luck.

“The young girl and her younger brother had just been put on the motorbike by their mother. The rider was to drop them to school,” said Karanja.

“The rider passed me, as I was on foot, but then I heard a child wailing in pain. I looked and saw the girl’s leg in the spokes. The rider stopped, but it was too late,” said the observer.

He continued by saying that the experience taught him to never travel as the pillion rider with a child who is unable to support themselves.

Some parents claim they have no choice, such as June, a single mother of three who works as a hotelier in Nairobi.

She said: “I go to work at 5 am, and I have children who need to go to school. Tell me, how do I get them to school? This is why I use my boda boda rider.

Adding: “All I do is ask him to be careful when carrying my children.”

Other parents want rules to be put in place to guarantee the security of kids using boda bodas and, if at all feasible, to prohibit kids under a particular age from riding as pillion passengers unless they are accompanied by an adult.