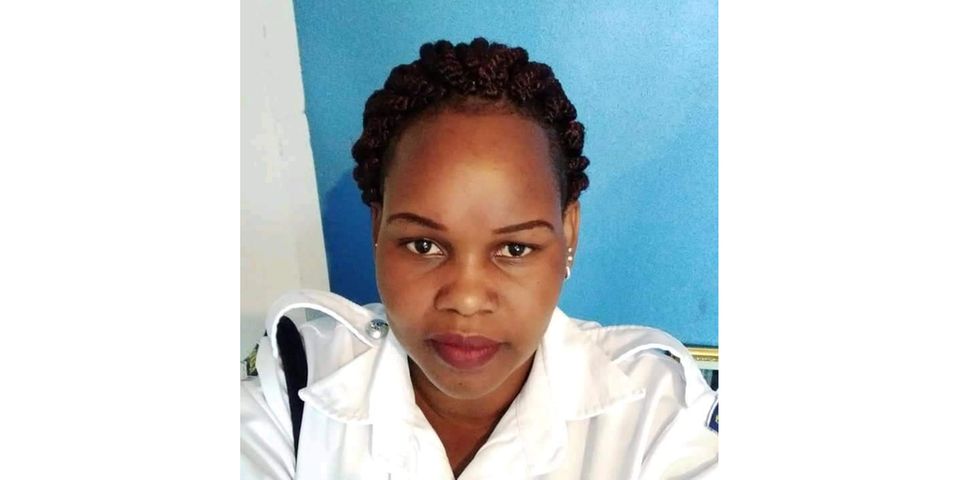 A female police officer wanted by detectives over the killing of a colleague in Nakuru is suspected to have killed another man in Kiambu on Tuesday evening.

Corporal Carolyne Kangogo, 34, is on the run since the death of Constable John Ogweno whose bullet-riddled body was on Monday found inside his carat the Kasarani Police Station in Nakuru.

But as detectives were conducting a search for her, police in Kiambu reported that she had spent the night with Peter Ndwiga, whose body was found at a hotel room in Ruiru.

Preliminary investigations show that the two had booked room number 107 at Hotel Dedamax at 4pm on Monday where they spent the night.

At around 1pm Tuesday, the owner of the hotel, Mr Peter Mugeshi, made a distress call to Theta Police Station and Murera Police Post under Kiambu Police Station to report that a client was found dead inside his room.

“Police officers rushed to the scene where it was established that a man and a lady booked room on July, 5, 2021 at 4:22pm. The body of the man was found to have a bullet wound on the head, and one empty spent cartridge of 9mm was found in the room. One wallet containing an ID card with the names Peter Ndwiga, 32, and car keys with a holder written Toyota Probox KDB 506U were found in the pockets of the deceased,” a police report seen by Nation.Africa indicates.

The report further says the lady left the hotel around midnight. A screen grab of the hotel’s CCTV footage shows a woman in a yellow hoodie leaving the hotel. Another screen grab of the footage obtained from cameras at the VIP lounge show Ms Kangogo walking into the hotel with a man who was wearing a burgundy pair of trousers and a grey coat.

The Directorate of Criminal Investigations (DCI) says Ms Kagongo lured the man to the room after paying for it, before savagely shooting him in the head at point-blank range.

“She later told an attendant working at the guest house that she had gone to buy toothpaste, before making her escape,” a statement by DCI states.

The body of the man, which was discovered on top of the bed, had one shoe on. He still had his clothes on.

The body was moved to General Kago Funeral Home in Thika, awaiting a post-mortem.

Nation.Africa has further obtained a blood-spattered receipt with the name of Caroline Kagongo. The receipt found in one of the man’s pockets indicates that Sh3,020 was paid to Jogoo Kimakia County Lodge Thika at 15.20 on Monday, just hours after the body of Mr Ogweno was discovered in his car in Nakuru.

Police have been pursuing Ms Kagongo after it emerged that she was last seen with Mr Ogweno, whom she was in a relationship with. Detectives in Nakuru say the female officer was entangled in a web of love affairs.

Investigations also indicate that the Ms Kagongo, who is the main suspect in the murder of the officer, on several occasions communicated with people who are on police radar for various crimes.

Nakuru County Criminal Investigations Officer Anthony Sunguti said the detectives have reason to believe that Mr Ogweno could have died at the hands of one or several people.

Mr Ogweno, who was attached to the Nakuru Central Police Station, was found dead on Monday morning inside a car at Kasarani police line in Nakuru where the two lived.

Shot in the head

He had a gunshot wound in his head and blood was oozing from his nose.

The police boss noted that the incident is believed to have occurred on Monday at 2.30am. His gun was taken and, during the search for the firearm at the two officers’ houses, some of Mr Ogweno’s clothes were found in Ms Kagongo’s house.

Surprisingly, nobody reported hearing gunshots in both incidents, begging the question as to whether the gun used by the double homicide suspect had been fitted with a silencer.

Mr Sunguti did not rule out the possibility that the killing of Ogweno could have been abetted by rogue police officers, but said that the homicide was subject to investigations.

Ms Kagongo’s phones remain switched off, and one of them was recovered near a fence where she is alleged to have passed through while escaping.

“Some of the people she has been communicating with, according to her phone records, include a number of dangerous criminals who are being pursued by the police,” said Mr Sunguti

The officer revealed that Ms Kangogo was married to a senior police officer based in Mombasa County and has two children. It is not clear whether the officer was still married or had divorced.

One of her colleagues said the woman has been involved in several dramas with her lovers, majority of whom are police officers.

“She is feared by many police officers as she is known to cause problems for her lovers. One day after she disagreed with one of her lovers, she raised a false alarm and the man was beaten up by a mob. He was arrested and thrown into police cells before it was discovered that he was also an officer who had been framed,” said the colleague.

In another incident, the colleague said Ms Kangongo had beaten up her husband in public after they differed.

Mr Ogweno, the Nation has established, was a graduate with bachelor of commerce degree, who was transferred to Nakuru six months ago from Kericho County.

Sources indicate that he was also running a web of love affairs despite being married to two wives.

One of his senior colleagues said Mr Ogweno was an honest and disciplined officer who carried out his duties with much diligence.