All hail The Kenyan Dictionary… 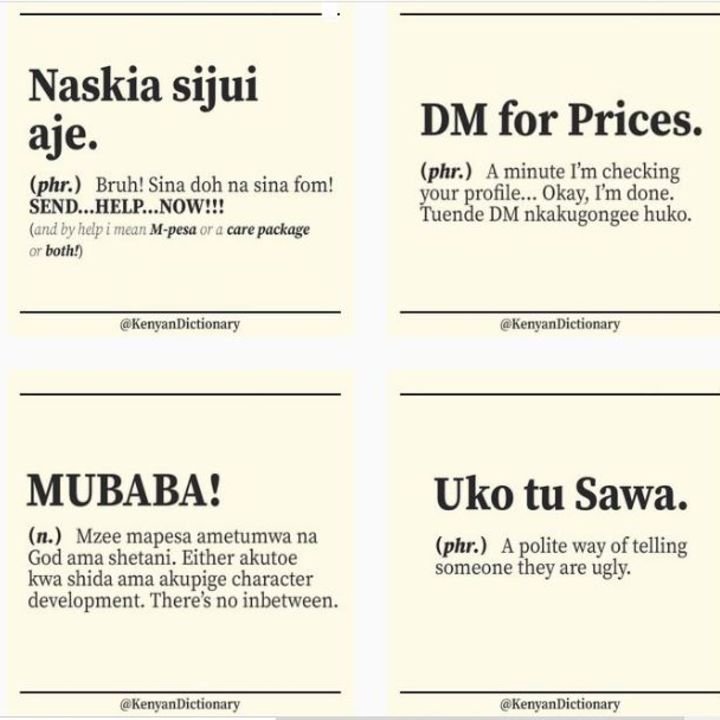 To the uninitiated, “Hey, long time…” is an everyday social-media greeting for souls who lost contact many moons ago.

But a bunch of Kenyan lexicographers are asking you not to take this salutation on its face value because it is likely to cost you ‘something’.

According to the budding wordsmiths who have been studying the diction of our online conversations, this loaded phrase is used “when a Kenyan wants to ask you for a favour”.

And barring your unlikely membership in the infamous Stingy Men Association (SMA), at the end of the winding chats that oft-follow the request-laden hello, you most likely have responded, “Let me see what I can do.” 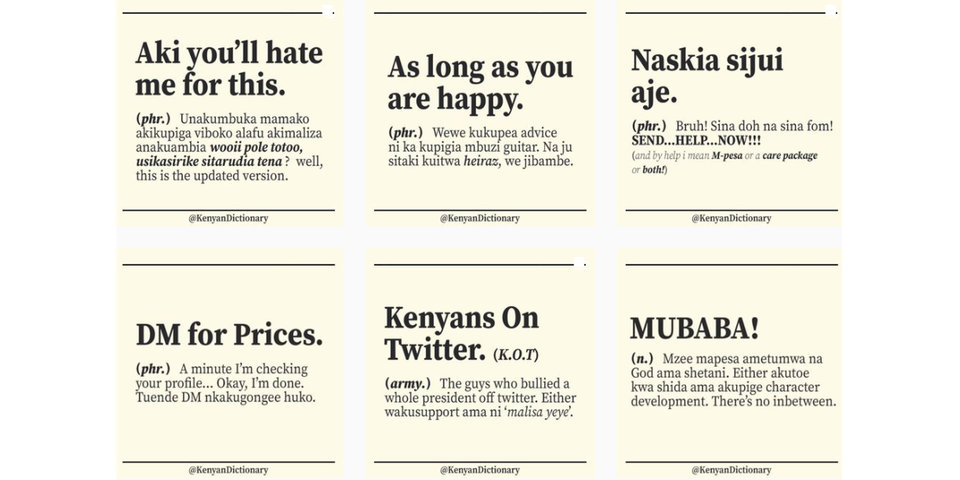 “If you receive this reply, just try your luck elsewhere because the assistance won’t come,” the language experts say of the response popular with men unwilling to extend favours to their girlfriends and spouses — the majority, real and imagined members of SMA.

These two interpretations are among a growing list of meanings that the two-man team of virtual lexicographers has given to local phraseology as they endeavour to decode the peculiar habits of Kenyans, their lifestyles and not-very-forthright approaches to issues.

For slightly over a month now, the language buffs have been building The Kenyan Dictionary — an online resource ascribing witty, cheeky, comical and even silly interpretations to the words used in our daily online and offline powwows.

The dictionary’s assorted language servings include alternative vocabularies and their equivalents in Sheng, Kiswahili and English.

“We started in August 2021 and our aim is to explain the deep meanings of words Kenyans use in their interactions at home, at work, in business and even in relationships,” says Mr Kevin Kamau, the Creative Director of The Kenyan Dictionary.

READ ALSO  VIDEO: US-based Kenyan man sheds tears as he takes his grandmother on her first ever flight

The word masters have created language labs on Facebook and Instagram, with a merchandise shop to boot, as they seek to reveal the real meanings of scripts from the now ‘coded’ Kenyan tongue.

“We chose Instagram and Facebook because their algorithms allow easy sharing of posts and this helps our content go viral, reaching more and more people,” says the 25-year-old alumnus of Nairobi Institute of Technology who works with his friend Edwin Ngari, 23. 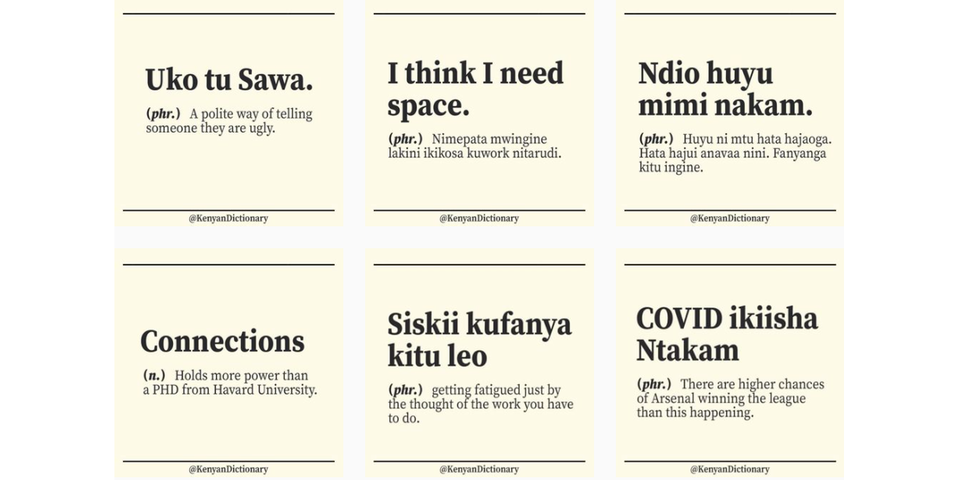 “In just 30 days, our content has spread across social media with many people opening parody accounts on Twitter, a platform we have not been keen on, given its algorithmic restrictions.”

Boasting hundreds of thousands of followers on the two platforms, The Kenyan Dictionary is described as “A Guide to Understanding Kenyans”.

“Learn Something Every Day,” the teachers of the emerging Kenyan lingo say.

But unlike the works of the revered Oxford Corpus, a language project at Oxford University in England that provides the basis for the Oxford English Dictionary (OED), the quirky Kenyan Dictionary does not include language-learning aids such as parts of speech, spellings, word origins, phonics and phonetics.

The open-source dictionary is a potpourri of words, phrases and sentences that are increasingly creeping into family, academic, business and other official repartees.

“We are still in the process of defining parts of speech and we currently have ‘n’ for noun, ‘phr’ for phrase, ‘q’ for question,” says Kevin, a freelance graphic designer.

And for weeks now, the hashtag #KenyaDictionary and its memes have been trending on Instagram, Twitter and WhatsApp groups, with netizens sharing the contents of the beta-format collection.

Some members of a burgeoning legion of fans have gone a step further to contribute to the resource by posting the responses they have been getting from family, friends and even enemies.

Examples include Babyghurl (A Kenyan woman who wants nothing but princess treatment); Kiongozi (leader), which means you have to part with cash; Unachoma (when someone starts spilling too much unnecessary truth) and Uko tu sawa (you look just fine) – a polite way of telling someone they are ugly.

Others are Connections (friends who hold more power than a PhD from Harvard University), Sherehe (party) means music, weed, drinks and sex), Mubaba (sugar daddy or sponsor) and of course aki nipromise hautajam (promise me you won’t be mad), which is used by a Kenyan woman who has cheated.

“Of the many we have done, ‘I think I need space’ (I’ve found someone better but I’ll be back if the relationship doesn’t work out) is the most successful because it went viral after receiving endorsements from celebs and influencers,” says the creative director in charge of design and publishing. 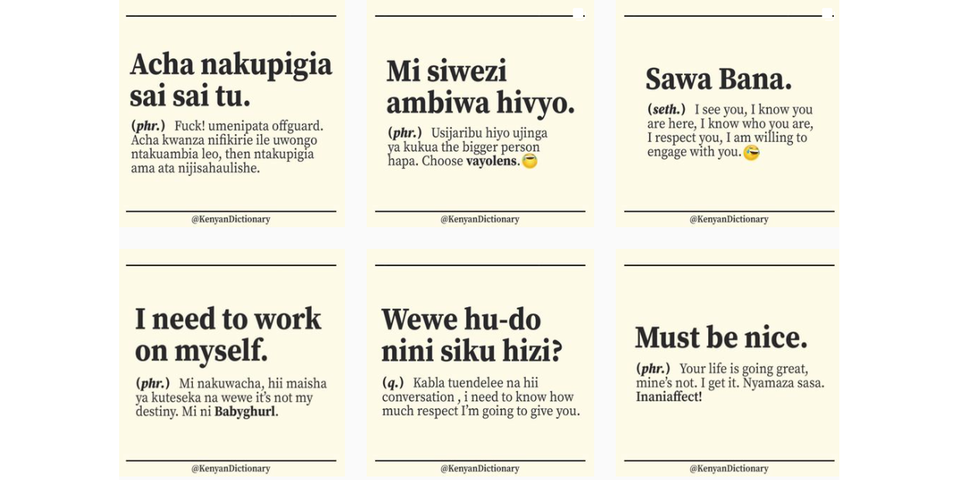 One of the recently decoded buzzwords is ‘Hustler’ (a guy who lives in Karen and is guarded by 257 General Service Unit officers) – a offshoot of peeling back the mask on the security detail and multibillion-shilling empire belonging to Deputy President William Ruto, a self-declared ‘Hustler’.

And as the weekend approaches, The Kenyan Dictionary phrases that are likely to trend include Gin (the liquor that has kept many Kenyans from depression); Mum amekusalamia (Mum said Hi) – a lie used in relationships to make your partner feel special; Unaeza Kam Ukitaka (Come if you wish)— the easiest way to make a Kenyan woman feel unwanted and Si Tupostpone (Let’s postpone) — meaning I have found better plans.

While the ongoing conversation around The Kenyan Dictionary is mainly serving the entertainment purpose for now, language experts say the young generation, a majority of whom subscribe to this language, are communicating volumes.

“Just like Sheng in Kenya and Pidgin in Nigeria, Generation Z is adopting these words and phrases because they want to show how dynamic and innovative they are in their communication. To them, the older generations are too conservative in their language use,” says Dr Hilda Kebeya, a Senior Lecturer in Sociolinguistics— the study of the way language is affected by differences in social class, region, sex among others— at Kenyatta University’s Department of English and Linguistics.

“From the Sheng perspective, young people also feel neglected and want to encourage and assert themselves. The older generation has money, power and influence and this new language is their way of compensating for the things they lack.”

Willis Ochieng, a master of English pronunciation, concurs, saying millennials are using the language they are comfortable with.

“The rules of the English language, for instance, are very elusive and even professors hit misses. The youth of today don’t like books and reading and they are coming up with these languages because they lack a good background (in mainstream languages such as English),” he told the Nation.

Mr Ochieng says while The Kenyan Dictionary is fashionable among young people, its biggest challenge is acceptance, adoption by masses and longevity.

“How many are using it now and how many will use it once they grow up? And for The Kenyan Dictionary Project team, are they supported? Can their product stand the test of time?” he said as he encouraged the budding lexicographers to continue exploiting language dynamism.

Kevin says they are banking on thousands of their supporters and merchandise shop to take the online dictionary to the next level.

The shop that stocks t-shirts, pillows, throws and mats has signed a partnership with Purpink Gift Shop to distribute its Kenya Dictionary-branded merchandise.

“Our plan is to open a YouTube channel and as website where we will be discussing and teaching contents of The Kenyan Dictionary.”

From the Nation’s review of fans’ feedback on The Kenyan Dictionary posts, it’s a Sawa Bana — “I see you, I know you are here, I know who you are you are, I respect you and I’m willing to engage with you.”

My horror story in Saudi Arabia