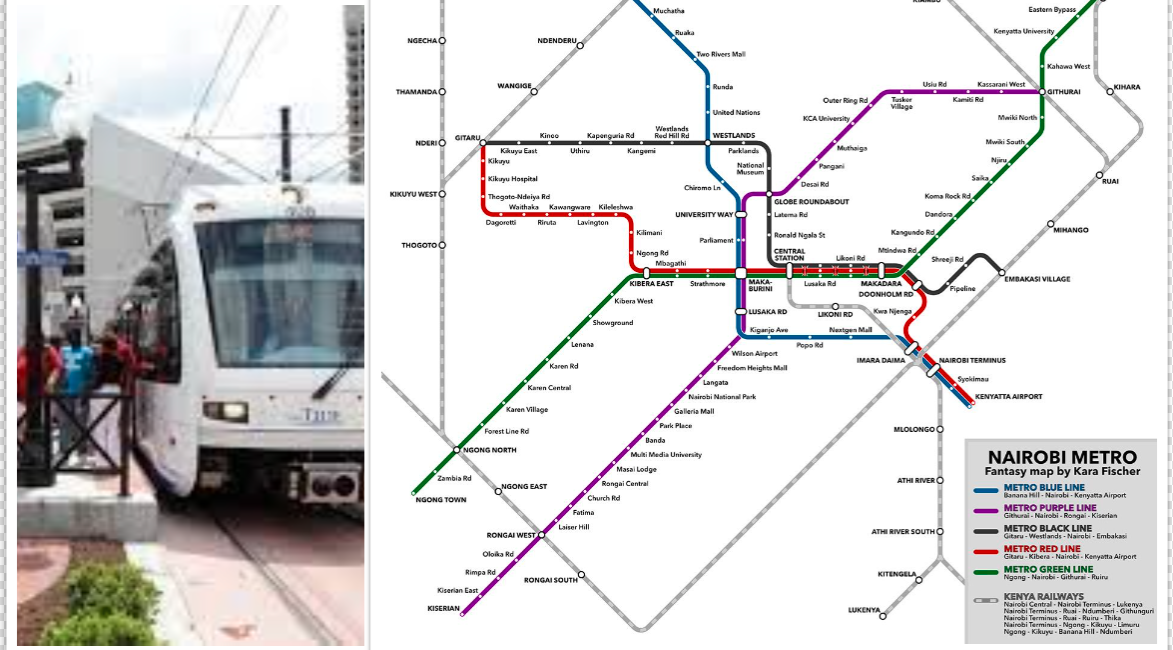 Kenyans were captivated by a 24-year-old American’s dream concept for Nairobi’s train system.

Kara Fischer designed a fictitious metro system for Nairobi, and Kenyans hailed her for her ingenuity on Twitter. Her design also sparked discussion about the city’s transportation infrastructure.

Kara has never visited Kenya, but she has been creating imaginary maps since she was eleven years old. Her latest design for Nairobi, she said, was influenced by her childhood works.

Fischer went on to say that she investigated the history of the city’s railway system before designing the Kenya Railways design for Nairobi, and that the present system was not meeting the demands of the population.

“In designing my map of Kenya Railways, I was fascinated by the history of the meter-gauge network and the new Standard Gauge Railroad. But what stood out to me was that the lines of the Nairobi Commuter Rail network were short, had a few stops, and only operated a few times a day.

According to the designer, lines with rare service and dispersed stops would often travel further out from the city center, whereas short lines that stayed primarily within a city would have regular service and a large number of stations near together.

“So the way I saw it, Nairobi was using commuter rail to do a metro’s job, and its current network wasn’t serving the needs of the citizens. This was remarkable to me since I knew most people in Nairobi don’t have cars,” Fischer explained.

She imagined how much easier it would be to go around Nairobi if the city had a well-developed train system that spanned broad swaths of the city and made regular stops in densely populated regions.

“And that’s what raised the question; what if Nairobi had an actual metro, with frequent stops and frequent service? Where would the lines go? Almost on a whim, I decided to try making a fantasy map, just like the maps I’d made since I was eleven,” she remarked.

Kara noted that in creating her designs, she chose to follow existing major roadways, which she said was a popular method in towns all around the world.

In her investigation, she discovered that important highways already lead to significant locations, and that there are a variety of ways to construct the tracks.

These include sharing lanes with vehicles on the road, in the median in the middle of the road, raised above the road, and in tunnels beneath the road.

“Waiyaki Way, Thika Rd, and Mombasa Rd were obvious choices, and I decided to also add an additional downtown route that could go along either Moi Ave or Tom Mboya St. At the outskirts of the city, I tried to connect some of the larger suburbs, but I completely missed both Rongai and Ngong due to a visual quirk in Apple Maps.”

Mbithi Masya, a singer and filmmaker, uploaded a sample of her design on Twitter, and it went viral. Kenyans were intrigued by Fischer’s work because it demonstrated the prospect of smoother transportation in the city if the government invested in train services, according to Fischer.

There are also thieves in Azimio – Karua