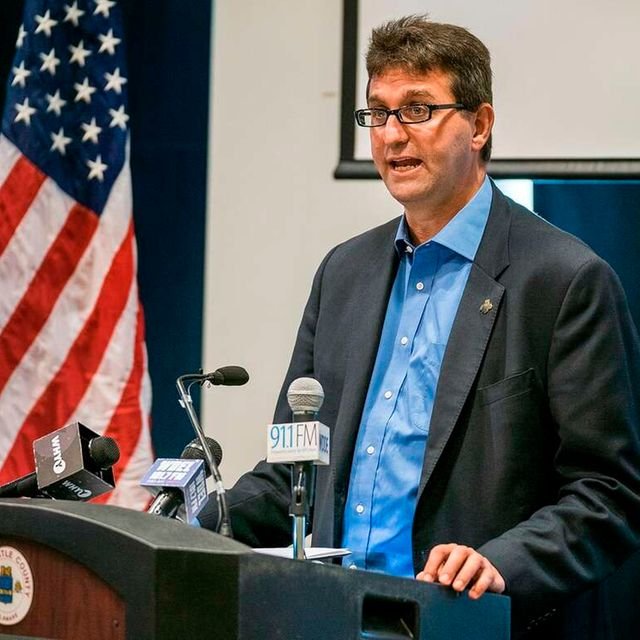 To the majority of Kenyans living in America’s Delaware state, New Castle County Executive Mathew Meyer is not just one of their community leaders who always picks up their phones if they want to raise an immigration issue, or if they are looking for some services from the state.

Matt Mzungu, as most of them call him, is also a man they invite to their wedding anniversaries, park events and even nyama choma evenings in their backyards if they want to brush up on their Kiswahili.

“Matt is not just our County Executive who works hard for every Delawarean. We consider him one of us because he’s particularly very close to our Kenyan community. By the way, the guy is so fluent in Kiswahili it’s unbelievable!” said Nick Nakitare, a Kenyan resident of Bear, Delaware.

But what Nakitare and most Kenyans in Delaware and those at home who watch him speak fluent Swahili on Kenyan TV from time to time don’t know is that Meyer’s Kenyan connections are extensive and the roots run deep.

“I’ve lived in Kenya and got to know the Kenyan people and their culture pretty well. I also have business interests in Kenya and I travel there from time to time. Back here in Delaware, I know and interact with a good number of Kenyans. Most of them are my supporters and friends,” Meyer told the Sunday Nation.

Matt Meyer is the founder and owner of VituMob, an East African multimillion-shilling e-commerce retailer based in Hurlingham, Nairobi. According to Matt, VituMob, which he founded seven years ago and which is doing very well, enables Kenyans to shop online at more than 20 leading e-commerce websites from around the world using M-Pesa or a credit card.

“Using VituMob, it takes you seconds to order any product online from around the world. You can order without a credit card, using M-Pesa or Airtel Money, and your order is delivered to your doorstep. The magic of global commerce at your fingertips. That is VituMob for you,” he said.

Mr Meyer says his company utilises technology, transparency and innovation to increase East Africa’s inclusion in the global marketplace. “Our services have become even more important recently because of Covid-19 lockdowns. Our facilities in Wilmington, Delaware, Wembley, UK and Nairobi are very busy delivering thousands of items each day,” he notes.

But, VituMob, as Meyer himself would say, is not his first rodeo. In 1995, as a law student in Kenya on an exchange programme, he co-founded the Wikyo Akala Project, which today sells used tyre sandals around the world.

“As I walked through the Mathare Valley, a sprawling line of dilapidated huts and faeces-laden alleys that hundreds of thousands called home, the images shocked me. Being forced to live off other people’s trash is a tragedy, no doubt. But out of tragedy can come commercial opportunities for the people of Korogocho, as well as environmental lessons for the rest of the world,” he said.

He says that in fact, it is out of this seemingly desperate environment that he and his friend Benson Wikyo started Ecosandals, a community-based sandal-making operation that now sells globally and employs dozens of sandal-makers from Korogocho.

“The sandals, made with durable soles recycled from old car tyres, last five years or 50,000 miles. And they are providing an increasing number of unemployed young adults with job opportunities and rewards to last a lifetime,” he says.

Indeed, Ecosandals operation was so successful that in 2012, US Senator Chris Coons (D-Del.), chairman of the Senate Foreign Relations Subcommittee on African Affairs, was on tour in Kenya and visited the facility in Korogocho. Speaking at the facility, Senator Coons said, “As we shift the US mentality toward Africa from aid to trade, local businesses like Ecosandals are the perfect example of how to create good, quality jobs, and I’m so proud a Delawarean helped to found this company.”

Mathew Meyer was born in Bay city, Michigan, and grew up in Wilmington, Delaware. His family moved from Michigan to Delaware when Meyer was months old. He graduated from Wilmington Friends School and Brown University.

At the age of 21, Meyer received sponsorship from St Lawrence University to go to Kenya as an exchange student. He was affiliated to the University of Nairobi.

“I was in Kenya the first time for four months during which period I travelled extensively around the country. I lived in Kisii, deep in the village for one week and in Samburu for two weeks. I also lived in South B and BuruBuru while working in Dandora and Mathare slums so I know Kenya and its people very well,” he says.

Mr Meyer says the experience he had in Kenya completely changed his life and how he perceived the world.

“In many ways I’m doing what I’m doing now in politics, business and civic engagement because of what I saw and experienced while I was in Kenya. I can say without any equivocation that I’m a better person because of my Kenyan experience,” Mr Meyer says wistfully in an interview.

Meyer says among his teachers at the University of Nairobi were now Makueni Governor Prof Kivutha Kibwana, Supreme Court judge Smokin Wanjala and Oketch Owiti. Mr Meyer was at the University during the heady days of the second liberation as the country clamoured for multipartyism.

“It was the mid-90s when the streets of Nairobi rang with calls for former President Moi to go. I was associated with the Kenya Human Rights Commission and other civil society organisations like NGOs Council, 4Cs and Kituo Cha Sheria. I still remain friends with people like former CJ Willy Mutunga, ODM leader Raila Odinga, Wafula Buke and Kabando Wa Kabando,” he says.

Mr Meyer says his return to Kenya was something of a happenstance. “Upon graduating from Brown, I had a choice between taking up a job at Oracle, one of the country’s biggest software companies, and starting a sandals company in Korogocho with Undugu Society. I chose to take the grant from Samuel Huntington. I was one of two selected from over 100 applicants,” he says.

“I spent one year living in Buru Buru and working in Korogocho, starting the e-commerce company, Ecosandals. We were selling ecosandals from Korogocho to the world online,” he adds.

Mr Meyer has been hailed by Delawareans, especially immigrants among them Kenyans, as a different kind of leader for New Castle County whose star is rising very fast. In 2016, he ran for office for the first time and unseated a heavily favoured three-term incumbent. He now runs Delaware’s largest county, which hosts nearly two-thirds of the population of the state.

He easily won re-election last year because of his record of cutting government spending, introducing new technologies that enable citizens to engage in their county government like never before, hiring the most diverse senior staff in county history and introducing and funding unique community-oriented policing strategies that have enabled hundreds of individuals with substance abuse and mental health issues to receive the treatment they need rather than being sent in handcuffs into the criminal justice system.

Meyer’s star is rising fast, in part because of his closeness to the Democratic Party leadership in Delaware, among them President Joe Biden and Senator Chris Coons. Meyer calls the two his mentors.

“I have watched President Biden’s leadership style from way back when I was young. In fact, as a teenager in 1988, I volunteered in his campaign and have done so ever since. I feel particularly privileged to be part of the Democratic party that is now headed by President Biden, somebody I call a friend and a mentor. And, yes, I’m close to Senator Coons also because remember I’m occupying the office he once occupied and did such a great job that the people of Delaware took him to the senate,” he said. As to whether he plans to contest a congressional or gubernatorial seat in the next four years, his answer is simply, “I just want to do the best job now as the county executive. Everything else will come after this.”

How Kenyan experience shaped his leadership

Mr Meyer has been praised as a different kind of leader for New Castle County.

Economic analysts say that, within months after he was elected, he managed to cut government spending by nearly $5 million, introduced new technologies that enable citizens to engage in their county government like never before, hired the most diverse senior staff in county history and introduced and funded unique community-oriented policing strategies that have enabled hundreds of individuals with substance abuse and mental health issues to receive treatment.

Meyer says that in many ways, his earlier visits and subsequent engagements in Kenya and with Kenyans has made him a better leader. He says his constant interactions with minority communities in Delaware has presented him with unique opportunities to see the world through a wider lens. This has enabled him to relate to challenges that his constituents face, especially those from minority and underprivileged communities.

“As you know Delaware is a very diverse, multi-cultural society. The challenges that migrant communities among Kenyans face are very different from other communities, especially the Caucasian community. You can’t apply cookie-cutter solutions to all the problems presented to you. I’m glad that when a Kenyan family comes to my office and says they have to ship the remains of their loved one for burial in Kenya despite Covid-19 restrictions, I understand because I understand how Kenyans treat their dead,” he says.

Mr Meyer is so embedded in the community he serves that, even as county executive, he teaches, in collaboration with senior county staff, a class he created on public leadership and local government for 11th graders in the high school in the county with the highest percentage of students on free and reduced-cost lunch.

For instance, he is a regular guest and participant on Umoja Delaware, a Kenyan group Zoom meeting that discusses how the community is dealing with challenges brought about by the Covid-19 pandemic. The group meets every Saturday and features mostly Kenyan youth.

“This is one of my best forums because, from time to time, I get to engage with young Kenyans, especially those in local schools and colleges and so I also get to learn a lot about areas we need to improve to make their learning a great experience,” he says.

Meyer is a big proponent of international exchange visits and programmes. In fact, he’s a patron of Start-UP-Africa, an exchange programme started in Delaware by Erastus Mong’are that organises annual visits of students and entrepreneurs from Kenya. Some of the high school students who have visited Delaware and other states have returned to attend universities and colleges. Some have been inspired by the lessons they have learnt and networks created to return home and do more around entrepreneurship and innovation.

By Chris Wamalwa for Nation.Africa