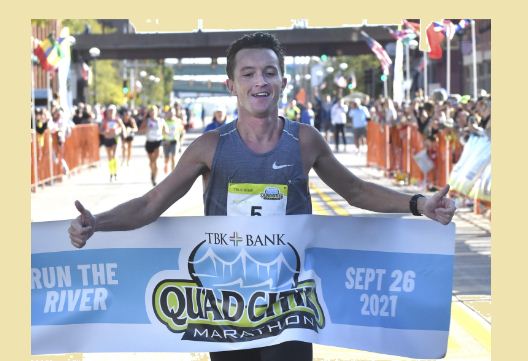 Kenyan runners Elijah Mwangangi Saolo and Luke Kibet were far ahead of Pence midway through the race when they spotted a  race volunteer bicyclist who accidentally led them in the wrong direction.

The pair followed the cyclist, who instead of turning in the direction of the path, biked straight ahead.

The win also gave the U.S. its first Quad Cities Marathon champion since 2001.

After the race, Pence said, “It was pretty obvious” which way runners were supposed to go and he was not sure what Saolo and Kibet were thinking.

“I was about 20 seconds back so I kind of saw it happening, but I’m not going to shout,” he said.

Race officials are reportedly considering how they might compensate both Kenyan runners.

The race director Joe Moreno confirmed the volunteer cyclist went the wrong way, but faults the Kenyans for ignoring clear markers and signage and following his lead.

Race officials had hosted a meeting the day before the race to familiarize runners with the course.

By the time Saolo and Kibet got to the finish line, Moreno explained to the pair that they had been automatically disqualified for taking an unofficial route.

The cyclist reportedly confessed after the race, saying:  “I messed up royally.”

According to the Quad-City Times, Kenyan Saolo had recently started a GoFundMe page to collect enough money for himself, his wife and two children to remain in the U.S.

The fundraiser page stated that Saolo supports his family by running, and has lost a significant amount of income after many races were cancelled during the pandemic.

Saolo is the grandson of Joseph Nzau, a prominent Kenyan runner who won the Quad-City Times Bix 7 twice in the 1980s.

He had been training ahead of the marathon with his grandfather in the USA.