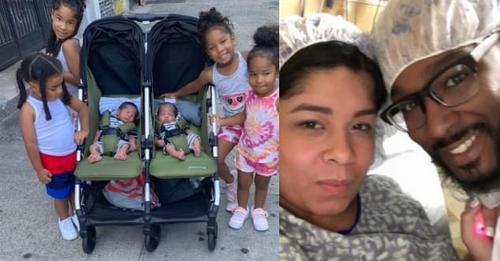 A New York-based couple is in celebration after welcoming its third consecutive set of twins.

The couple of Jolene Mckee, 32, and her husband, Andrew, 33, from Brooklyn, New York recently welcomed their fifth and six babies in just five years.

According to Metro UK, the two named their last set of twins Aiden and Jaiden, who are now three months old.

Speaking during a recent interview with members of the fourth estate, the mother said her last twins are like a blessing, considering she welcomed them in her third pregnancy.

”I never envisioned myself with a big family. I thought I’d only have maybe one or two kids. But it is such a blessing that I have had six babies from just three pregnancies. When I discovered I was pregnant with twins for the third time, I just fully accepted that this must be what I was appointed to do.” the mum, Jolene said.

Lucky to have all three combination

The mum added that she is grateful to God because she has all three combinations which include girl twins, boy twins and boy-girl twins.

TUKO.co.ke has, however, learnt that it was not all rosy for the couple during their journey to build a family.

It should be noted Jolene suffered miscarriage before getting or rather conceiving their first set of twins, Peyton and Paige.

Graduate Admissions requirements at The University Of Alabama In Huntsville

PHOTOS: Jalang’o, wife Amina step out in matching outfits during vacation in Mombasa