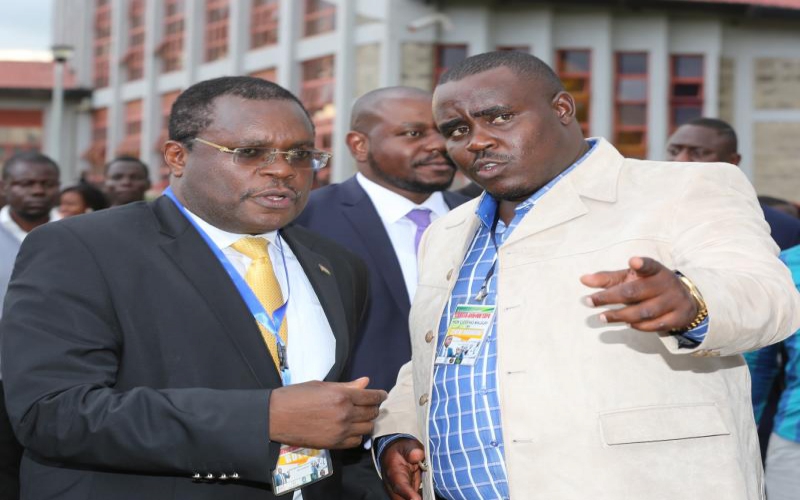 It took Kakamega Senator Cleophas Malala jetlag following an 18-hour direct flight to the US to come to terms with his weight issues.

With severe back pain, away in a foreign land, and unable to buy painkillers over the counter, he had to go to the hospital.

That is when reality hit him.

After all the tests were done, the verdict was terse; he needed to start a new journey, not back to his motherland but to claim back his health status. Of them accumulated from his waist up.

“The experts told me that I was straining my spinal code, the 93kg from the waist up was like carrying a bag of maize,” he laughs.

Because of the strained backbone, he was not allowed to exercise, so he was put on a liquid diet that helped him to lose weight uniformly.

“At first the liquid diet sounded easy but it was hectic, I was on that diet for 90 days. I would dilute the protein, mineral, and vitamin supplements in water then drink at the top of every hour for 12 hours a day,”

Malala says that the diet aims to make sure your body is starved to burn the fat and at the same time giving you energy.

“At first I was tempted to take energy drinks and sugary stuff but I had to be strong. I started noticing the results and that motivated me, it was like I was shrinking,” he adds.

After 90 days he had lost 20kg and his shoe size shrunk to 44 from 45. He also says that the weight loss boosted his self-esteem.

“It was hard to convince people you are youthful when you don’t look it, at least now I look my age, I can also walk into a boutique and buy clothes that fit. Before I didn’t have the luxury of getting beautiful clothes. If I dropped my sweater you’d be forgiven to think it was a duvet,” he laughs.

However, apart from cravings, the journey came with dissuasion; people thinking that he was unwell.

“The people I was fat with were now mad at me that I left the “club.” I got encouragement from people, Saks – Senator Sakaja also encouraged me big time,”

After 90 days Malala was allowed to take porridge then slowly with time he was put on mashed food. However, he had a near-death experience at one hotel in Nairobi.

“After 90 days I had a meeting with Raila at Serena Hotel, I had a craving for coke, so I ordered. When it went down my throat, it was a satisfying feeling I can’t explain. Then Raila excused himself for a few minutes and asked me to order lunch.

I ate mashed potatoes with pork chops. This was the first time I was eating solid food in months, the feeling was horrible, I felt like my stomach was being squeezed so tight and I couldn’t breathe properly.”

Putting solid food in his mouth after 90 days felt so foreign. ”It felt like he had forgotten the art of chewing,” he recalls.

“I rushed to the hospital, where I was attended to and got relieved, then followed it with consultation from the experts,” he concludes

“Insurance does not cover it [weight matters] so it cost me around Sh1.2 million. The cost was that high because the supplements were expensive, plus consultation and tests. The supplements were customised for my body so I couldn’t share them.”

He was given the supplements after a thorough check-up, involving blood and urine tests, heartbeat, energy levels, allergies, kidney and liver functions, all this to prevent opportunistic diseases and side effects.

Sailing in the same canoe was Mvita MP, Abdulswamad Nassir.

“For a very long time I wanted to jump out of a plane with a parachute, so when I went to Dubai that was my opportunity. But the instructor told me that my weight was a threat,” says Nassir.

Meeting him at the Parliament Buildings where he had just concluded Parliamentary Public Investment Committee meeting that he chairs, Nassir, who is dressed in a black fitting suit, says that he can finally wear suits that he used to admire.

“I never imagined that at one time in my life I would ever wear a fitting suit. But most importantly, other than even how suits fit, is the fact that I don’t remember the last time I was unwell. My car used to have a lot of medicines … painkillers, antacids. Acidity was a constant problem,” he recalls.

Before starting the health journey, he weighed 130kg. Now he ranges between 95 and 96kgs.

“Before you start this journey talk to a nutritionist. In my case, I started on what is known as zero carbohydrates. That means no wheat; my diet consisted of nothing but 100 per cent protein and vegetables. I lost weight rapidly which is also not very healthy,” he adds.

He exercises at least five to six times a week. When he started losing weight people thought that he was unwell or too much pressure from work.

“There’s no short cut. Consume less and burn more, my advice is if you give up during the first day that’s the biggest mistake you can make, but you can be motivated once you start seeing the results. Talk to an expert.”

The story is also similar for David Kitavi who is a former Member of the Nairobi County Assembly.

“I represented Laini Saba in the County assembly. As an MCA I would sit in my office or go to be at the assembly to debate issues then eat samosas and sausages. Before I knew it I was 110 kilos.”

When he decided to lose weight after being diagnosed with diabetes, people thought that he had hit rock bottom financially. However, the health journey was worth it since being overweight led to his admission to the hospital.

“The situation worsened and I was admitted for two weeks. When the doctor told me I was diabetic, I knew I was going to be on drugs all my life. I avoided people and stopped being the happy person I was.”

That is when he decided to do his own nutrition research and identified nutritionist Betty Okere who helped him in his journey.

“Right now I am not on any diabetes medication; my health is better and I feel lighter and more productive. I am positive I will reverse my diabetic status.”

According to Okere nutrition plays a very huge role in managing illnesses. Depending on the condition someone is suffering from, addressing their nutrient intake requirement becomes very important.

For instance, a person suffering from diabetes may want to watch their carbohydrate intake to control blood sugar levels while a person with low immunity may want to increase their micronutrient intake like what we have seen recently of people wanting to take in zinc, vitamin C among other micronutrients.

An obese person may, on the other hand, want to address their overall caloric intake to prevent further weight gain and to start shedding off the excess weight.

A report by the Kenya Demographic and Health Survey (KDHS) shows that Kenya is increasingly faced with the emergence of diet-related non-communicable diseases such as hypertension, diabetes, heart diseases, obesity and gout.

These diseases are mainly caused by a change in lifestyle caused by excessive intake of highly refined and high-fat foods, sugar and salt.

It is especially high in urban areas with (43 per cent) as compared to rural areas (26 per cent). In Nairobi, 47 per cent of women overweight or obese.