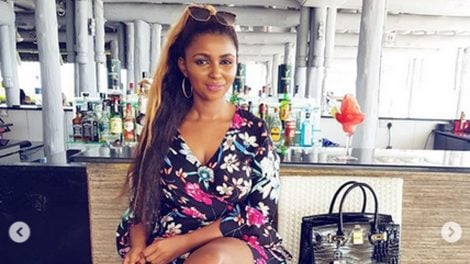 Keroche Breweries heiress Anerlisa Muigai has appeared to hit out at her soon-to-be Tanzanian ex-hubby as the fallout between the former lovebirds widens.

In a series of cryptic messages on Instagram, Muigai suggests her hubby Bernard Michael Mnyang’anga, who is commonly known as Ben Pol, was not in a position to maintain her lifestyle when they lived as hubby and wife.

She’s also suggested the Tanzanian musician is an ‘insecure’ man.

“A man is supposed to provide and (protect) Not (Beg) and collect. Never trust your tongue when your heart is better,” she concluded.

Muigai also says she is keen to avoid ‘drama’ with the Moyo Machine hitmaker.

“A real woman avoids drama, she knows her time is precious, and she’s not wasting it on unimportant things. Some people aren’t loyal to you; they are loyal to their need of you. Once their need changes, so does their loyalty,” she wrote.

“Never trust your tongue when your heart is bitter,”

Muigai’s responses come days after Ben Pol revealed in a tell-it-all interview the challenges he faced in her marriage.

“When reports emerged on social media last year that we had split, things were bad, we were not on speaking terms. It is true, we had split for about a month and a half. Things were bad to an extent Anerlisa sent me documents from her lawyers asking for a separation,” Ben Pol said.

“We were good until February this year (2021) when again the bubble burst. Again, we separated in episodes. We did not speak for three weeks, tried fixing things, and not long we were back in the woods and this time things were pretty intense,”

READ ALSO  Edward Ndichu claims to have Covid-19 , fails to take a plea

He has since filed for divorce ending an eleven-month union since the couple tied the knot in a colourful wedding in Dar es Salaam.