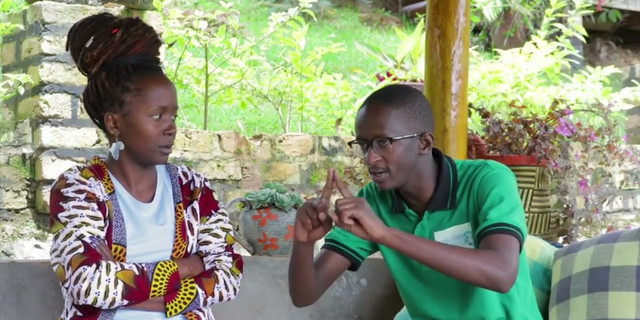 Ugandan actor Anne Kanisme has revealed that she is tempted by Njugush’s resemblance to her husband.

According to her, she finds the Kenyan comedian attractive for having multiple similarities with Skylanta.

“This photo has been playing tricks on me all morning. Is it just me or should i be finding @blessednjugush attractive too🙈 because the way he looks like @skylantagram without dreads🤔🤔” Kansime wrote on her Instagram page.

In a comment to the post, Njugush told Kansime’s husband to watch out for her wife’s observations.

The new mum has been over the moon lately after welcoming her son, Selassie Ataho in April.

She had kept her pregnancy a secret until her period of delivery when she posted the first picture of her baby bump.

“I have been looking for the perfect way to break it to you my dearest Ninjas that soon my Kantu Skylanta and I shall have a little Ninja added on to our family, and I thought and thought, what better way!!?” Kansime announced.

She also took the chance to shame her critics, who had accused her of selling her uterus.

“Some people were trying to figure out why I did not have kids with my ex-husband Gerald Ojok. So, they said that I had sold my uterus for fame. The sad thing is, even if it’s not true, there is no way you can be able to show people that your uterus is still intact,”