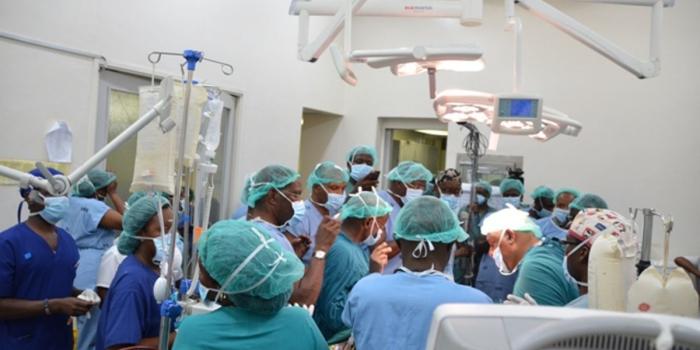 On January 18, the team performed a four-hour Tetralogy repair on Carson Micky, a two-year-old boy. The surgery was characterized as difficult by surgeons.

Dr. Gachara and her colleagues successfully performed a heart surgery on 18-year-old Mary Wanjiku in February of last year using a pinhole method to seal the Patent Ductus Arteriosus (PDA).

The doctors used the girl’s leg to gain access to her heart during the minimally invasive surgery to repair a hole in her heart.

A hole in the wall between the two lower chambers, a constriction of the pulmonary valve and major pulmonary artery, an enlarged aortic valve, and a thicker than normal muscular wall of the lower right chamber of the heart were all present in baby Carson’s case.

“It is a birth defect that affects normal blood flow through the heart; leading to bluish looking skin colour – called cyanosis – because their blood doesn’t carry enough oxygen,” according to Gachara and her colleagues. This occurs when a baby’s heart does not form appropriately when the infant grows and develops throughout pregnancy.

Intensivists are medical professionals who have been specially trained to care for critically ill patients around the clock.

Dr. Gachara described it as an uncommon illness caused by a cluster of four heart abnormalities that alter the way blood travels to the lungs through the heart yesterday.

The purpose of the procedure, according to Dr. Gachara, is to allow the heart to function as normally as feasible.

“Repairing the defects can greatly improve a child’s health and quality of life,” she said. The problem affects roughly five out of every 10,000 births, according to hospital data, and it affects both males and girls equally.

And, as a result of these recent achievements, KNH is now the only public hospital in the country capable of doing extremely delicate yet effective surgery.

Family Bank Records Rise in Earnings to Kes.3.3B Profit Before Tax in 2021