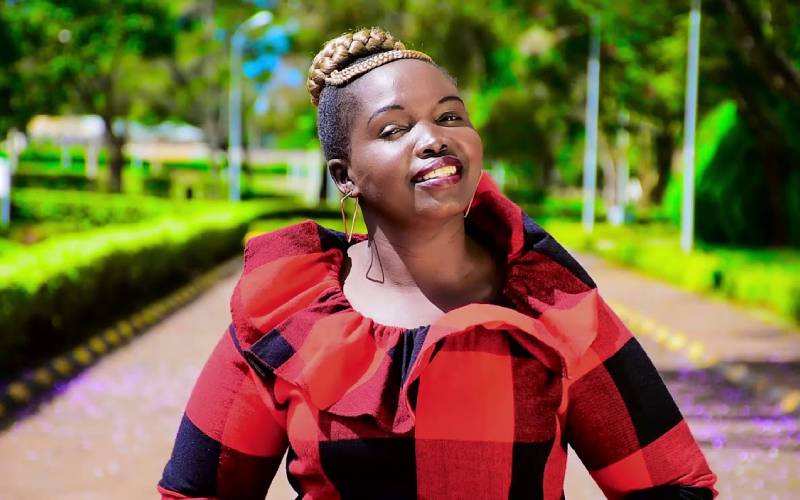 A Marakwet gospel artiste Millicent Jerotich known by her stage name Marakwet Daughter and four others cheated death in a road accident along Chesoi-Maron road in Elgeyo Marakwet.

A Toyota Probox they were travelling in rolled several times down a steep slope in Karemit near Tuturung Trading Centre after the driver lost control of the vehicle on a sharp bend, on Sunday evening.

The car veered off the meandering road and rolled about 40 metres before landing in a gulley.

Jerotich was travelling from Kapchebau African Inland Church where she had launched her latest album which has songs including Kass Amwoung (listen to me), Panda (the race), Mowole (Don’t change) and KJ.

She is also famous for Berur (blessings), Boiboiyet (happiness) and Tororot (God) among others.

Others on board the ill-fated vehicle were David Serem, an AIC pastor from Kapsabet, Nandi County.

Serem had been accompanied by Samson Mavanani, Sheila Iyone and Bernard Koros.

The victims who sustained bruises and shock were rushed to Kapsowar Mission Hospital in Marakwet West.

“I am lucky I got out of the wreckage unhurt. We had gone to Kapchebau to attend the launch of the album and we returned immediately,” said Serem.

The cleric said the driver complained that the breaks of the vehicle were failing, and upon reaching the sharp bent, he lost control.

“The driver tried to crash the vehicle on a wall but it flew. One of the occupants, the artist and I jumped out immediately after it landed on the gulley. She had injuries. We were rushed to the hospital by good Samaritans,” Serem said at the hospital.

Jerotich said she suffered shock and dislocation in her ankle in the evening accident.

“It was by God’s grace that we survived the accident. The vehicle rolled several times in a steep slope,” she said from her hospital bed at Kapsowar Mission Hospital.

“The launch was great and the fans were happy. I hope to recover soon. The doctors said I am out of danger.”

Mid last year, a vehicle veered off the bent and landed in the gulley.

Marakwet East police boss Clement Mbavu said the driver of the Toyota Probox might have been new on the road.

Mr Mbavu asked motorists plying the road to be cautious while engaging sharp corners along the meandering Chesoi-Maron road.

“Investigations have been launched to establish the exact cause of the accident. We suspect the driver was new in the area and could not engage the corner,” he said.