Asiya Mohammed: I will never wallow in self-pity! 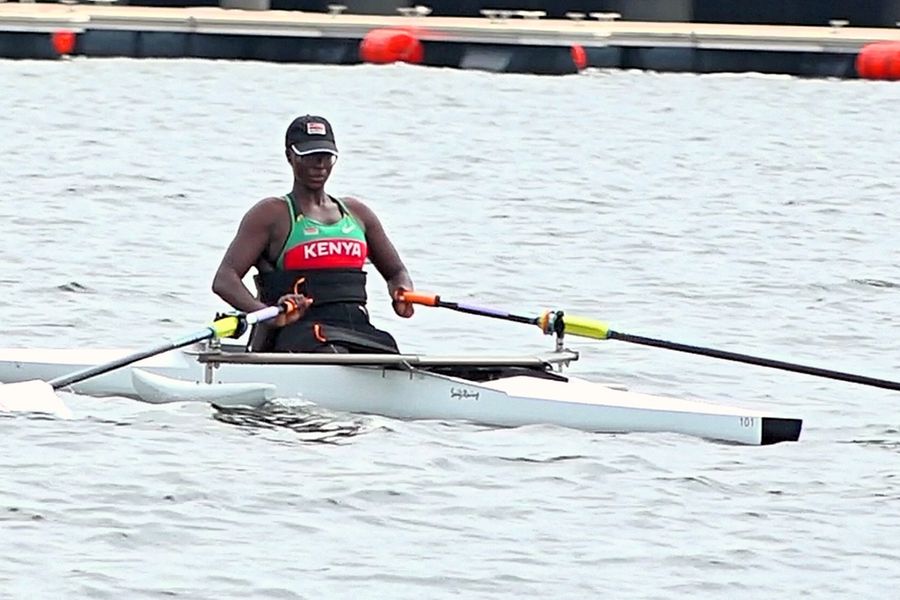 The PR1 Single Sculls competition involves rowers “with minimal or no trunk function who primarily propel the boat through arm and shoulder function.”

These rowers have poor sitting balance, which requires them to be strapped to the boat or seat.

Asiya’s story is nothing short of a miracle. Aged just two, she was a toddler full of life.

But disaster struck when, in 1994, while playing at Mombasa’s Ganjoni Estate, a train ran over her, dismembering her legs and part of her left hand.

Upon learning of the accident, Asiya’s father suffered a stroke in shock, and died.

Her mother died eight years after the accident, the orphaned Asiya left under the care of relatives.

“With my condition, I knew there was little I could do to change my situation, but I was not deterred.

“I joined Port Reitz Special School in Mombasa for my primary education from 2000 to 2007 and Joy Town, Thika from 2008 to 2011 for my secondary education,” Asiya told Nation Sport in an earlier interview.

“It took a whole four years to be taught how to walk using artificial legs just like a nursery kid, and at that time I couldn’t even play with friends my age, because they kept running away from me due to my condition,” she explained.

“I have been lucky to have a strong family support system.

“My cousin became my parent at age 19 after my mother died and has always been supportive.

“We are a strong family, always cracking jokes with each other and supporting one another to grow,” she explained in an earlier interview quoted by the Tokyo Paralympics Games information portal.

It was while in school that she developed an interest in sports.

She joined Shanzu Teachers College in 2012, graduating with a diploma in early childhood education three years later and was employed at Shappa Academy in Shanzu.

But, bitten by the sports bug, she quit a year later to focus on playing wheelchair tennis.

“I decided to quit my job and concentrate fully on my health. I made an immediate decision to abandon teaching completely and go full-bodied into sport full-time.

“I tried out any sports that were available. I had all the time in the world. I started doing marathons, and I have also been very successful in tennis.”

Asiya was encouraged by her family to take up sport to tame her increasing weight.

“As a disabled person, I was weighing 70 kilogrammes which caused a lot of concern to my immediate family – I was so fat… I was like a drum, and that’s why I decided to cut my weight because being overweight attracts various ailments,” she reminisced with a sense of humour.

“I started rowing when experts from the international rowing body came to Mombasa in December, 2018, for a training programme at Tudor Watersport.

“It was my first time in water in a boat and I used to capsize, but I soon got used to my balance and specialised in the ‘arms only’ category, which means using arms only to manipulate the boat, mainly for amputees and paralysed people… and I loved the game.

“In May, 2019, I entered my first international camp and regatta, and I underwent training for two weeks and then had my first competition in Gavirate, Italy.”

It wasn’t easy, though, for Asiya who had to fund-raise for her ticket to the qualification competition in Tunis.

“Two weeks before the competition, the Kenya Rowing and Canoe Federation told me they tried to ask the ministry to fund the trip, but were unsuccessful.

“I was so heartbroken and frustrated.

“I couldn’t let that chance go, so I asked for contributions from family and friends to fund only my air ticket.

“In the end, I got to travel, but without a coach. I knew it was going to be tough, but I really needed that experience and exposure.

“When I took to the water to compete in my PR1 competition, all pumped up and ready to compete, officials stepped up and barred me from racing because I did not have a Kenya kit, while all my fellow Kenyans who had come for the same competition were well kitted.

“However, luck was truly on my side. I gave my all, winning my category, and got the ticket to Tokyo,” Asiya, who had to borrow competition kit from male compatriots recalls.

In May this year, Asiya was offered an opportunity to train in Portugal for three months after which she returned to Kenya, concentrating her training in Ruiru before travelling to Tokyo, a regime she says holds her in good stead as she hits the water for competition Friday.

READ ALSO  I am learning how to date my husband afresh

She might be gunning for gold, silver or bronze Friday, but the mere fact that Asiya is here after such a difficult early life is victory in itself.

She encourages other persons with disability not to wallow in self-pity.

“Sport should not only be perceived from the competition point of view. Sport is good for health.
“Especially for us with physical challenges. If we don’t keep fit, we expose ourselves to the slightest of ailments.

“Sport keeps you fit, not only health-wise, but also emotionally. If you are all-round fit – physically, emotionally and psychologically – you will lead a good life… it’s all in the mind.”

Asiya points out that sport has made her even stronger mentally and emotionally.

“Through sport, you travel and meet people from various backgrounds. I’ve met people with physical challenges who make me feel I’m in fact much better off.

“Then I ask myself, if that person is worse off than me, then why should I sulk? – such comparisons make you stronger.”

After Wednesday’s training, Asiya will take it easy today to “conserve energy” and prepare herself for competition.

On Thursday, she will have a light session – 30 minutes in the morning and 30 in the evening while also focusing on her pre-race nutrition.

Her bubbly self, Asiya concludes our interview with another dose of humour on the issue of nutrition: “Mimi nakula kila kitu… snails, nyoka, zote napita nazo… kama wao wanakula na wanashindana hapa kwa maji, kwa nini mimi nisikule?” (I eat anything, snails, snakes… if the people here eat these things and still compete in the water, why not me?”

She will compete in the PR1 Single Sculls from 9.30am (3.30am Kenyan time) looking for a chance to get into Sunday’s final.

Why The Kenya Airlift Program Was Formed.