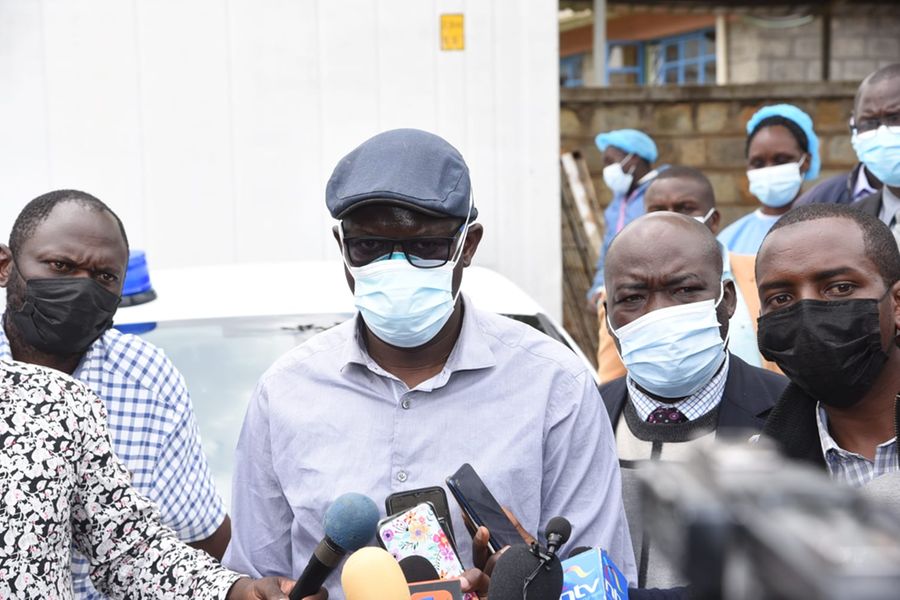 A post-mortem examination on the body of policewoman Caroline Kangogo in Eldoret has indicated that she died from a single gunshot to the head.

The analysis by Chief Government Pathologist, Dr Johansen Oduor, shows the bullet entered through the right chin, pierced through the spine and damaged her brain before exiting through the left side of the skull.

“The gun was close to the skin on the right side of the chin and there was a gunshot wound on the left side of the head just above the ear,” said Dr Oduor, after a two-hour autopsy at the Moi Teaching and Referral Hospital mortuary in Eldoret, Uasin Gishu County.

He said more laboratory tests will be carried out.

“I have collected samples and more swabs that will help us find out the actual nature of the death,” he said, while remaining non-committal on whether it was death by suicide.

Kangogo, who was being sought for the murder of her colleague John Ogweno as well as Juja-based businessman Peter Ndwiga, was found dead at the family’s bathroom, 40 metres away from the main house, in Nyawa village in Iten, Elgeyo Marakwet county.

Police had ruled the death as suicide.

“It is suspected that she might have shot herself using the firearm from below the chin and the bullet exited on the head slightly above the left ear,” a police report said.

A Ceska pistol serial number G4670 which was cocked with a magazine loaded with eight rounds of ammunition, one in the chamber, one used cartridge and one bullet head were recovered from the scene.

The autopsy by Dr Oduor comes after high-profile lawyers raised concerns about the position Kangogo was found in and whether her death was actually by suicide.

Led by Law Society of Kenya president Nelson Havi, whose organisation had hired veteran lawyer John Khaminwa to plead her case, lawyers said the cause of death needs to be investigated further.

Others who have doubted the suicide story are lawyer Cliff Ombeta and Makueni Senator Mutula Kilonzo Jr.

But Mzee Barnabas Kibor, Kangogo’s father and himself a former police inspector, insists that all signs pointed to suicide.

“I do not like it when people go on with these insinuations that she might have been killed. In case you actually know for sure she was killed, then come forward and say so. But from what I see, this girl, my daughter, took her own life depending on how we found her,” said Mzee Kibor.

This, he reckons, can be deduced from the fact that the bathroom where she was found, which is 40 metres from the main house, was locked from inside.

“There is no way someone could have brought the body and dumped it in that bathroom, but still have it locked from the inside where we found her body. She locked herself inside,” he told Nation.Africa.

Mzee Kibor also seems to believe all has been figured out, including the reason there was no blood splatter.

“When the bullet exited, it couldn’t have splatter blood on the wall because looking at the bullet, it went in on the chin, and exited through the left ear. She shot from the right and it went up, to the left. It could not have splattered because the bullet would have had to come out at the front, from behind,” explained Mzee Kibor, who also disputed that his daughter was left-handed, saying she was, indeed, right-handed.

Last Friday, a teary Mzee Kibor demanded to be given the body of the police woman, after a planned post-mortem failed to happen as planned.

He protested that he had carried a coffin, ready to transport the body for burial the next day, on Saturday.

“I have no case with anybody. Just give me my child I go and bury. What will I do to the cow I have slaughtered for the burial?” he asked in Iten after the post-mortem was called off, days after he had been given the go-ahead to plan for the burial on condition that the autopsy will be done before the set date.

Once bitten twice shy, the family this week announced that it had shelved burial plans until the post-mortem report is released.

“We shall only set the burial after the DCI releases the post-mortem report,” said Robert Kipkorir, a family spokesperson.

READ ALSO  Why IEBC allowed Miguna to vote despite deportation

The family has announced that when it does bury Ms Kangogo, it will not honour her wishes to be cremated in a wedding gown.

“To my people, it’s my wedding day – dress me in a white gown that my husband could not afford.  To my parents, I am requesting my body to be cremated to end your suffering. Remember to take good care of my children. For the things in Kasarani, hire movers for safe delivery here,” she reportedly said in a trove of text messages detectives said were found in a draft folder in her phone.