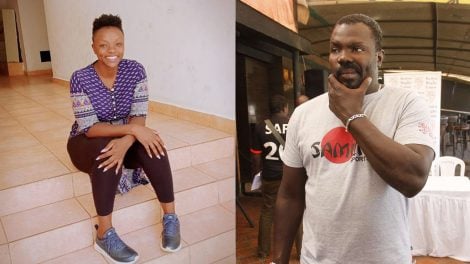 There could be some drama in the background at the late Benjamin Ayimba household.

Ayimba recently passed on while undergoing treatment at the Kenyatta hospital in Nairobi at the weekend and Senator Johnson Sakaja on Tuesday led his colleagues in the Senate in sharing their tribute and celebrating the life of arguably Kenya’s most successful rugby player and coach.

But then, one of the deceased’s baby mamas namely Gloria Moraa has publicly hit out at someone she did not name but whom Nairobi News understands is one of her in-laws, accusing her of ‘abusing’ the kids she sired with the deceased coach.

“A single woman with a child, never married has the audacity to constantly call my babies bastards and street chokoras (street kids),” Moraa, popularly known by the stage name Nyaboke, screamed in a Facebook post.

A frustrated Nyaboke also clarified her deceased baby daddy never helped her to take care of the kids.

“A woman who was helped raise her own child unlike me who raises hers alone. I was always told to be the bigger person, to calm down and oh! understand she was kichwa mbaya ( short fuse). I always kept calm but now again calling my kids the same? Can’t she respect even her own sibling??”

Not done yet, Nyaboke signed off with a warning.

“Then you expect God to just be silent and bless you, chunga sana mwanamke, Mungu sio kijana an sio rika yako (take care, God is not young, neither is He your agemate. These insults you always give kids will eat you one day.”

READ ALSO  Kenyans in US, rest of the Diaspora share Covid-19 vaccination experience

Nyaboke and the late Ayimba enjoyed a lukewarm relationship and she once dragged him to court claiming child support. In a related development, Ayimba’s family has pleaded with the public to help clear the Sh2.7 million hospital bill he incurred.