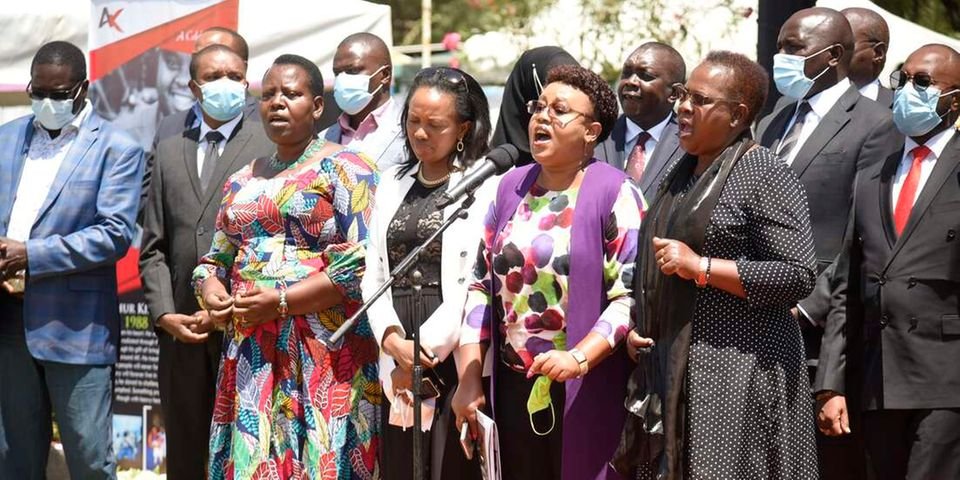 Rally driver Arthur Kinyanjui was on Thursday laid to rest at his Bahati home in Nakuru County, in an emotional send-off,  that preceded a colourful funeral ceremony attended by thousands of people.

The funeral ceremony took place at the Nakuru ASK Showground, where their was heavy security to ensure social distance and adherence of Ministry of Health Covid-19 guidelines.

Mr Kinyanjui, 33, who was the last born son of Bahati Member of Parliament Kimani Ngunjiri, died last week at the Premier Hospital in Nyali where he had been admitted for the last five months after he was taken ill.

Popularly known as ‘AK 47’ because he drove car number 47 plus his AK initials, Kinyanjui was among the youngest of Kenya’s top rally drivers.

The young driver has competed with the likes of legendary rally driver Ian Duncan in the Kenya National Autocross Championship where he came third in 2009.

His death came just two months after that of his grandmother who had also been sick.

Mr Kinyanjui leaves behind his wife Cindy and a daughter.

During the burial ceremony there was a mixture a sombre and celebratory mood among the mourners who came to bid the late Kinyanjui farewell.

In his eulogy, Deputy President William Ruto described the late Kinyanjui as a brilliant, promising and hardworking young man, who thrived in business and farming.

“Arthur was a brilliant and hardworking young man. He was a talented artist, a gifted entreprenuer and an accomplished farmer,” Ruto said.

Nakuru Governor Lee Kinyanjui said the late Kinyanjui was a dedicated, hardworking and vibrant young man, who will be greatly missed.

“Nakuru and the country at large has lost a hardworking and selfless young man, who was a role model to those around him,” said Kinyanjui.

His family eulogised Kinyanjui as a man with great insight and an undeniable love for motorsport.

“Death has robbed me of a great friend, ambitious, humble and hardworking son. I will miss you my dear son, you had big dreams. Nevertheless, all is well with my soul; let your soul rest in the hands of our God,” Mr Ngunjiri said of his son.

Politics also took centre stage at the ceremony, after a fresh war of words erupted between Deputy President William Ruto and Interior Cabinet Secretary Fred Matiang’i, over the latter’s criticism of the Judiciary.

The DP on Thursday told off the CS over his remarks on Wednesday, that the Judiciary was frustrating the war against crime in the country.

Addressing mourners, Ruto warned Matiang’i and other civil servants against attempts to stifle the independence of State institutions in the country.

“An independent Judiciary is the pillar to the rule of law. We expect that the Judiciary will stand up to be counted as an independent institution and not to listen to any lecture from any quarters,” Ruto said.

“We have confidence that the men and women in our Judiciary have the necessary professionalism and competence to discharge their mandate and their responsibility independently as required by the constitution.

“All institutions should ensure they are independent and professional and that they uphold the constitution. That is the secret to a stable and progressive country,” he added.

On Wednesday Dr Matiang’i, who spoke at the launch of the national crime statistic by the National Crime Research Centre, took issue with the lenient bail terms given to some of the repeat offenders especially politicians accused of engaging in criminal activities.

The CS said, politicians were responsible for violence witnessed during the recent by-elections in Matungu and Nakuru’s London Ward.

He warned that the government would not sit back and watch the Judiciary and the politicians take the country to ‘dangerous’ levels.

Ruto, who was accompanied by a host of politicians mainly allied to the Tangatanga group, also warned the police against being used politically, but instead serve Kenyans as per the constitution.

Referring to the arrests of his allies in the recent by-elections, the DP asked the Inspector General of Police Hillary Mutyambai, to stop getting orders from civil servants with political interests.

“The police service, according to the constitution of Kenya, is not supposed to take sides. It is an independent institution and should not take instructions from anybody. We expect the Inspector General of Police to provide the leadership that will ensure we have a professional and independent police service that does bend to political interests,” he said.

Kericho Senator Aaron Cheruiyot also criticised civil servants, whom he said want to use the Judiciary as a punching bag, because it was not convicting those that they consider their political enemies.

Leaders who accompanied DP Ruto, condemned the violence witnessed in the just concluded by-elections, saying that the incidents portrayed a dangerous trend.

“We have a problem of civil servants dabbling in politics especially those serving in the office of the president. They must understand that they are serving Kenyans not their selfish interests. Some people in the office of the president want to use powers bestowed on them to direct the police, other state organs to kill the democracy that Kenyans have fought for for several years,” said Kikuyu MP Kimani Ichungw’a.

READ ALSO  Uproar over transformer in the middle of Nairobi Expressway, KeNHA responds

“Nakuru is very special, especially to those of us elected on a Jubilee Party ticket. It is here, where we said never again will Kenyans shed blood because of politics. But I witnessed firsthand violence in the London Ward by-election, last week, as police supervised goons in beating a member of parliament. I felt sorry for Kenya,” Murkomen said.

Murkomen also sent mourners into fits of laughter when he observed that Nakuru Town West MP Samuel Arama, who was conspicuously missing at the event, had taken bed rest after a bruising London Ward by-elections, that saw his candidate defeated by the United Democratic Alliance(UDA) candidate.

“I am told that Nakuru Town West MP Samuel Arama has taken a weeklong rest after the London Ward elections. I will meet him in Nairobi, buy him tea and tell him violence does not elect leaders,” Murkomen said amid laughter from mourners.

Several leaders who attended the funeral ceremony said the London Ward by-election was an indication of what will happen in the 2022 General Elections.

“We thank the people of London Ward for electing UDA’s Anthony Nzuki and standing firm to protect democracy. Despite the teargas and State sponsored violence, you overwhelmingly elected Nzuki. Even in 2022 you are the people who will elect all leaders from MCA to president,” said South Mugirango MP Sylvanus Osoro.