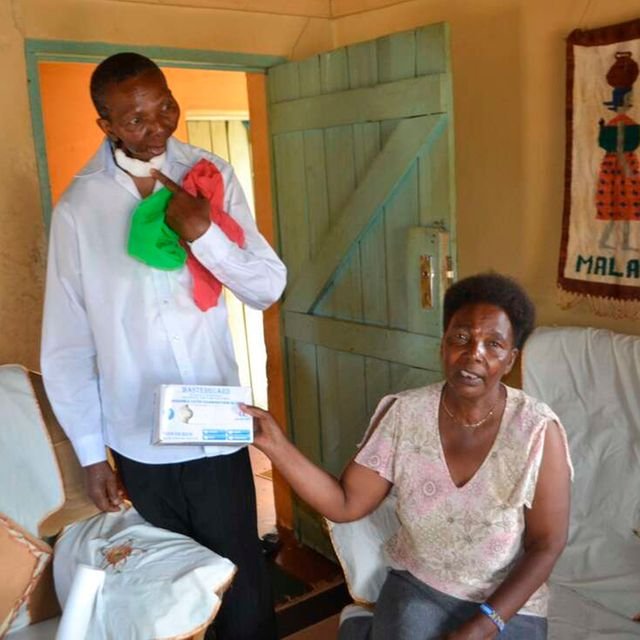 In 2000, I started feeling pain in my tongue. I always dismissed it, thinking I had bitten myself without knowing. Every time I shared this with my wife she would be mad at me, saying she did not understand why I kept on biting my tongue.

The pain persisted and after two months, small sores appeared on my tongue. I had a sore throat as well. No drugs worked and the pain got worse. The sore throat cleared, but I developed wounds on my tongue.

I was a teacher then.

At the beginning of 2001 when the pain became a nightmare, I went to Kitale District Hospital. I was scanned and the doctors decided to operate on me. Unfortunately, the operation did not make things get better.

By then we were worried. I knew something was terribly wrong, though I was not sure what. The persistent pain and agonising nights pushed me to see an ear, nose and throat specialist at Moi Teaching and Referral Hospital (MTRH) in August.

I thought there was a problem with my teeth or the ear. The checkup at Moi Teaching and Referral Hospital showed there was no swelling. I went back home without knowing what was wrong with me.

That marked the beginning of nightmarish days as the earache became unbearable. I had never felt such pain before.

The sore throat returned, this time more painful than before. I went back to the hospital and the doctor prescribed antibiotics. Still, the pain got worse.

When the doctors at MTRH could not help me, they referred me to Kenyatta National Hospital (KNH).

In March 2001, I went to KNH accompanied by my wife. After a checkup, the doctor insisted on a biopsy test. I will never forget this day. I felt like my whole world had come crashing down around me when the doctors delivered the news. I had tongue cancer.

READ ALSO  Dead and buried in a mass grave: Relatives’ agony when loved ones vanish

Hearing that my tongue would be removed was devastating, but it was the only way to stop the cancer from spreading. We went back home and held a prayer meeting. I knew God could not give me a burden I could not carry. He had a reason for the sickness.

The first operation was done at KNH in 2001. Due to the extent of the tumour, the whole tongue was removed. Nothing could be saved.

The surgeons split my throat, opened my jaw, through my chin and removed my tongue way down to my throat to ensure the cancer cells had not spread to the other parts of the body.

Immediately after my surgery, I was relieved of my duties as a headteacher on medical grounds. My salary was stopped.
I was in hospital from April to September. I was still in pain despite the operation.

After six months, I went back for a review. As if the cancer had not already stolen enough from me, the doctors had more bad news. The cancerous cells had spread to the other parts of the neck. I was booked for a second operation, where all my teeth and the jaw were removed.

My cancer was very aggressive and advanced. The surgery was followed by radiotherapy and chemotherapy so as to destroy any chances of the cancer ever coming back. I wanted to live, so I took it all in my stride.

I started my chemotherapy in 2001 at KNH. Due to the intensity of the rays and the effect of chemotherapy, I lost all the muscles that join the jaw to the hyoid bone (holds the tongue up) and all the flesh at the submandibular triangle.

The submandibular triangle is the space located below the chin and is bound above by the skin and the chin muscles.
Now I had no tongue, no teeth and no jaw. I could not talk for almost two months.

READ ALSO  Faith Kipyegon: Not yet done, I have big plans

In 2008 doctors did a grafting surgery using the flesh and tissues from my back to re-create and cover up the chin.

The surgeons used a larger graft to fill the chin. This took three months to recover. The doctors were waiting to see whether the chin could heal. Fortunately, it did.

Without my tongue, my speech was impaired since there was no musculature to aid speech. Only my wife can understand what I say. Initially, I worked with therapists to help me regain my speech but it did not work. The doctors did a tracheotomy in 2018 to help me breathe and speak. Because I cannot feed normally, I have a feeding tube which was placed in my stomach in 2006.

A tracheotomy is a surgical procedure to create a hole (stoma) in one’s windpipe (trachea) to provide an alternative airway for breathing. A device is inserted through the hole and secured in place with a strap around your neck.

After the surgery, I spent another three months in the hospital and was discharged.

At home, it was tough having to depend on my children to buy all the items I needed.

But, now I have adjusted to my new life. As a pastor, I have learned that it is only God who gives us the grace to keep living. I loved preaching, but I had to stop when the cancer overwhelmed me.

Can you imagine living like this for 21 years and still leading a normal life like any other person? It is by the grace of God. Healing begins with acceptance. It is only after you accept your condition that you are able to live a happier life.

I feed myself and even laugh and joke around with my family the way I used to before I got sick. I do not feel like less of a human being.

My wife does everything for me. When she leaves for her usual pastoral work, she blends my food and puts it in a thermos. I eat the same meals as my family, though blended.

When I wake up in the morning, I take my pain drugs – morphine and others. Then, I take a shower and my wife cleans my wounds both in the stomach and breathing pipe. I take the drugs six times a day because I am usually in too much pain.

At around 7am I take breakfast, mainly Weetabix, and later I have my 10 o’clock tea, through a syringe. At exactly 1pm I take my lunch and another cup of tea at 4pm. I take dinner at 6pm and another meal at 10pm before retiring to bed.

For a proper meal, I take two full 100ml syringes. The feeding syringe has three openings: for food, medicine and water. They all get in at different times because if I take them all at once, my stomach becomes bloated.

With the help of my children, fellow pastors and even my prayer warriors I have managed to live without major hitches. Although I spend about Sh10,000 a week on the drugs, I thank God my children have been able to help.

Even when we are tight on money, the pharmacists have never failed me. They allow me to take the drugs and pay later.

With my wife beside me, I am going back to the life I knew before cancer. She has stood by me in every situation. This is the true meaning of “For better, for worse”. Had she not been around, my life would be tough.