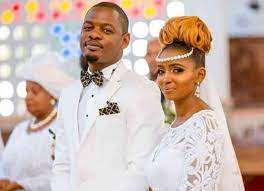 Benpol divorced Anerlisa Muigai less than a year after their wedding, claiming that their relationship was too rocky for a second chance.

But now that Anerlisa Muigai has lately declared her lawyers have finalized the divorce and she is now a free woman, it appears he may be having second thoughts.

Anerlisa Muigai announced the news on her Instagram stories.

“Officially Free. It would not be fair to not give a shout-out to these two advocates who worked tirelessly to make sure that the divorce was done quickly and not wait for years. Hamza Jabir and Hosea Chamba. Thank you for your work and for doing everything as requested,” She wrote

And just a week after she made her declaration, her ex-husband, Benpol, now claims he hasn’t heard anything about his divorce and that, as far as the case is concerned, not even the court where he filed the divorce is aware of the information Anerlisa Muigai has provided.

“I am also seeing these reports online. I haven’t been informed officially or unofficially. I don’t know where she got that communication from because even the court where I filed for the divorce isn’t aware of the reports.”

In that regard, I will leave the matter to the court and wait for the official outcome

Murder in Karen: Son arrested after mom succumbs to injuries he inflicted