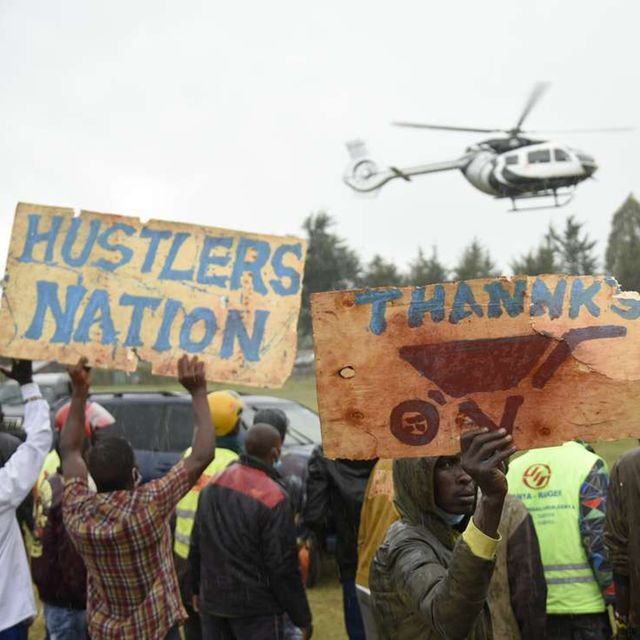 Deputy President William Ruto’s ‘hustlers versus dynasties’ campaign slogan could soon land him and his political allies in jail, in addition to being banned from holding public office, if a proposed Bill is passed into law.

Lawmakers have drafted a Bill that imposes severe fines, jail time and makes it a basis for removal from office any leader who propagates ‘class divisions’ in the country.

DP Ruto’s campaign slogan positions ‘hustlers’ as ordinary Kenyans seeking their place on the country’s political high table and ‘dynasties’ as wealthy families that have benefited from rich political heritage and connections, a narrative that critics claim could create a hostile split between the rich and the poor.

Anyone who incites Kenyans along the hustler versus dynasties split could, as per the Bill crafted by Parliament’s National Security Committee, be imprisoned for five years or pay a fine of Sh5 million.

“A person who has been dismissed or removed from office for a contravention of sections 62(1) and 62A(1) is disqualified from holding any other State or public Office,” the proposed National Cohesion And Integration (Amendment) Bill 2021 states.

The hustlers versus dynasties narrative has emerged as the campaign mantra being propagated DR Ruto’s political allies, who have christened themselves as hustlers to mean that they represent the downtrodden, while classifying the political wing led by President Uhuru Kenyatta and ODM leader Raila Odinga as the dynasties.  This is despite the fact that Mr Ruto and many of the lawmakers allied to him are way wealthier than ordinary Kenyans.

The Bill, drafted by the National Assembly Security Committee led by Kiambaa MP Paul Koinange, adds social status as a basis for discrimination by amending the NCIC Act 2008.

“A person who utters words intended to incite feelings of contempt, hatred, hostility, violence or discrimination against any person, group or community on the basis of the social status of a person, commits an offence and shall be liable on conviction to a fine not exceeding five million shillings, or to imprisonment for a term not exceeding five years, or both,” the draft law reads.

The law also gives the National Cohesion and Integration Commission additional powers to investigate where there has been incitement on the basis of ethnicity, racial or social status and recommend necessary disciplinary action.

Homa Bay Town MP Peter Kaluma and a member of the committee Monday said there is a proposal to give NCIC prosecutorial powers over hate speech offenders.

“We also want severe punishments to include life in prison for some aggravated cases of incitement and hate speech especially the kind that displaces people or leads to killings,” said Mr Kaluma in an interview.

He said drafting of the legislative proposals will be complete by end of this week, for tabling to the committee and later the House.

“This is not about one person but the whole country and it was done after consultations with NCIC,” he said.

The provision that the law can be used as a basis for removal from public office comes at a time when there have been plans to impeach the deputy president, being fronted by Lugari MP Ayub Savula.

If the Bill is passed and Mr Ruto and his political allies continue with their hustler narrative, they risk being hounded out of office.  Article 150 (1) (b) of the Constitution provides that the deputy president can be impeached on grounds of gross violation of the Constitution, crimes under national law and gross misconduct. Any MP who seeks to have the DP removed from office must get the support of one third or 117 of the 349 MPs in the National Assembly before bringing such a motion to the floor of the House.

Mathira MP Rigathi Gachagua, one of the DP’s allies, said they will fight the law both inside and outside Parliament.

“This misuse of the law is one of the unorthodox ways that is being used to silence us and we know others are coming.  We are not worried because the Constitution provides reasons why the DP can be removed from office and the threshold is higher. We know they are targeting us his foot soldiers, but we are not intimidated,” said Mr Gachagua.

The Mathira MP said the hustlers’ slogan is not a rich versus poor narrative but an inspiration message that anyone can make it if they work hard.

“You cannot stop an idea whose time has come,” added Mr Gachagua.

Though the DP ally promised a fight in the House, the Handshake team led by President Kenyatta and the ODM leader have managed to push through previous legislations and changes in House leadership despite opposition from Mr Ruto’s allies.

Mr Koinange did not reply to our queries on when the Bill will be tabled, but a source told the Nation that it will be prioritised by the House Business Committee. The matter was discussed by NCIC and the committee in a retreat two weeks ago and, already, the draft Bill is ready — showing the urgency the legislation is receiving.

Speaking to a vernacular station Monday, Mr Koinange said that he will not be intimidated by the visits and attempts to impose candidates in the constituency.

“The people of Kiambaa can never be intimidated to vote in a certain way. They resisted Moi’s money and influence, they resisted colonialists and they will resist any outsider trying to decide for them. We make our own decisions,” he told Inooro TV.

In a meeting with the committee early this month, NCIC Chairman Samuel Kobia termed the current political sloganeering of dynasties versus hustlers as a risk that could plunge the country into chaos ahead of next year’s elections.

President Kenyatta has also previously thrown political jabs at his deputy over the ‘hustler nation’ narrative. The President told Mt Kenya  leaders that  the narrative would set a dangerous precedent, saying that there is no way any leader can deal with the issues facing Kenyans by dividing them along class lines.