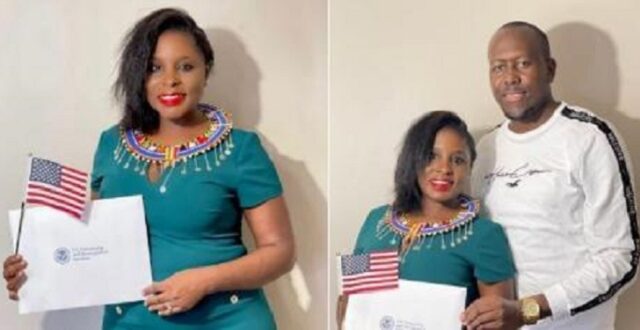 A former head of radio and presenter at Royal Media Services Evelyne Nashipae Kantet has faced criticism afterr announcing that she had finally received her United States citizenship.

Kantet shared the news on her social media this week, as she celebrated with family and friends in the US.

The former  Maiyan Radio presenter further hinted that she will be eyeing a seat in the United States Congress in the future.

But her announcement was received with mixed reactions from Kenyans on Twitter (KOT) who criticized her announcement, with some saying that getting US citizenship was not an achievement worth celebrating.

“No big deal. We are Kenyan citizens and we are not shouting about it from the mountain top,” wrote KJZ on Twitter.

“Is this news?” wondered another.

However, Kantet dismissed their sentiments and explained that her family and friends benefitted from her move and the US had more opportunities to explore.

“Thank you for keeping me busy today on my Twitter profile. So am out here with a hot chocolate mug following comments. Your bitterness seems to override reason. This is precisely why Kenya is not developing! If such people are the voters,” she hit back.

However, a good number of those who commented congratulated her and the husband for the achievement.

According to her LinkedIn, Nashipae oversees a foundation among the Maasai and Samburu communities that campaigns against Female Genital Mutilation (FGM).

The crusader is also the founder of The WE Foundation which focuses on empowering the girl child and the women in society.

Nashipae commands a large following and is acknowledged by both the young and the old in the Maasai and Samburu communities and beyond. She is an Anti-FGM Crusader and a champion of the Maa women’s rights in her community.

“The WE Foundation shares her vision of empowering the girl child consequently the women in society. This time round going a mile further to include education for both the old and the young in the society,” her LinkedIn profile reads.

The journalist is also a human rights activist with an interest in the rights of Maa women from her nomadic community.