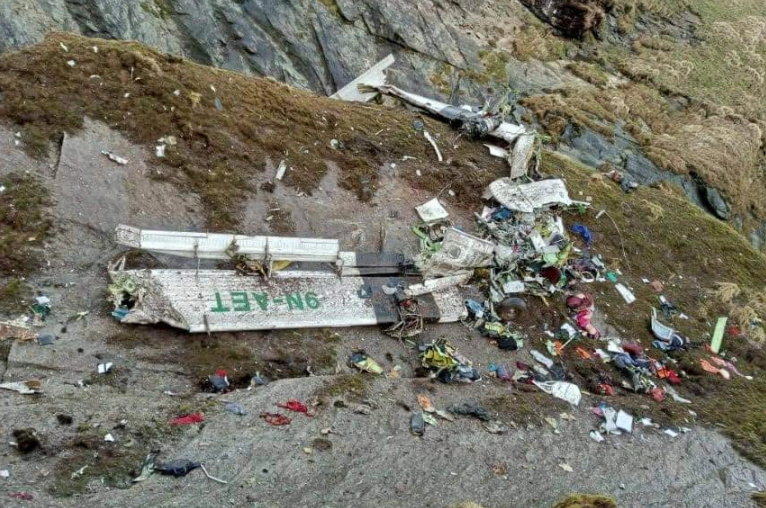 On Monday, Nepali rescuers recovered 16 remains from the crumpled wreckage of a passenger plane that crashed in the Himalayas. There were 22 people on board.

Military and private helicopters braved bad weather to comb the isolated mountainous terrain all day Sunday, assisted by groups on foot, but the unsuccessful search was called off when night fell.

Following the army’s return to duty on Monday, they posted a photo on social media depicting airplane parts and other wreckage littering a sheer slope, including a wing bearing the registration number 9N-AET.

“So far, 16 bodies have been recovered and teams are searching for the remaining six. Chances of survival are low but our efforts continue to find them,” Civil Aviation Authority spokesman Deo Chandra Lal Karn told AFP.

Army, police, mountain guides, and locals were among the 60 individuals who searched at the crash site, the most of whom had walked for miles on foot.

The jet “met an accident” about 14,500 feet (4,420 meters), according to the authority, in the Sanosware area of Mustang district’s Thasang municipality.

“Analysing the pictures we received, it seems that the flight did not catch fire. Everything is scattered in the site. The flight seems to have collided with a big rock on the hill,” said Pokhara Airport spokesman Dev Raj Subedi.

Four Indians, two Germans were on board, and the rest of the Nepalese passengers including a computer engineer, his wife, and their two daughters who had recently returned from the United States.

According to Indian police official Uttam Sonawane, the four Indians were a divorced couple and their 15-year-old daughter and 22-year-old son on a family trip.

Nepal’s aviation business has soared in recent years, transporting goods and people between remote locations, as well as foreign trekkers and climbers.

However, due to limited training and maintenance, it has long been plagued by poor safety.

Related Topics:NepalNewsPlane Crash
Up Next