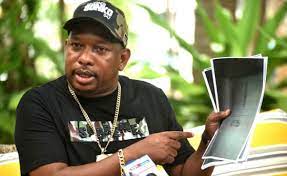 The former Nairobi City County Governor Mike Sonko has been disqualified from running as governor for Mombasa County following the Ethics and Anticorruption Commission’s recommendation to the IEBC on impeached and convicted politicians and civil servants.

IEBC says the decision was guided by Article 75(3) of the Constitution.

The article states, “A person who has been dismissed or otherwise removed from office for a contravention of the provisions specified in clause (2) is disqualified from holding any other state office.”

Sonko and former Kiambu Governor Ferdinand Waititu were impeached for corruption, abuse of office, and gross misconduct.  Both lost cases they filed to reverse the action.

Usawa Party leader Mwangi Wa Iria who is was red-listed over misappropriation of Ksh. 500 million.

Thuo Mathenge who was contesting for Nyeri Governorship was also disqualified over the degree requirement.

Bar owners explain why there’s a surge in ‘mchele’ cases