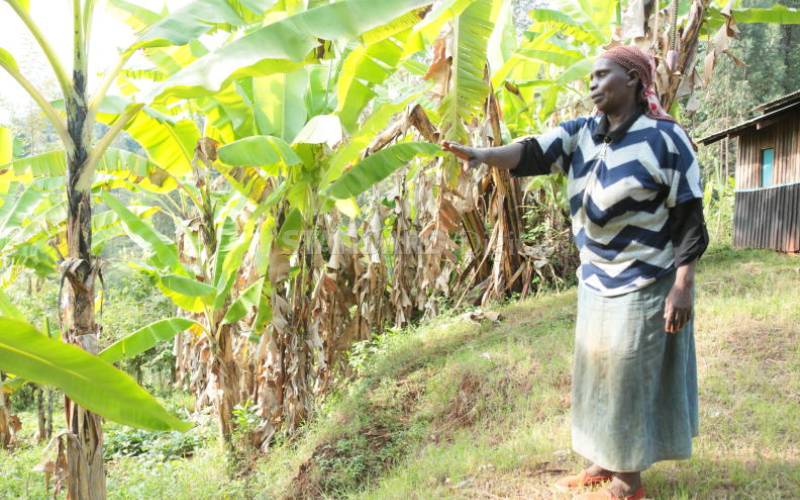 Samuel Ngunjiri Muthuma died on October 2, 2018. Since then, his body has been lying at Mukurweini Sub-county Hospital in Nyeri.

Multiple land cases have left the family of the 70-year-old frustrated.

His widow Anne Wamuyu and her four sons are now staring at possible eviction from a three-acre land.

The family has lost all the five cases taken to court concerning the land, with the only alternative being to file appeals one after the other.

On January 22, 2019, a court sitting in Mukurwe-ini issued a permanent injunction restraining the family from interring or burying the body in land parcel No Muhito/Gaturia/294.

This was after the new registered owner of the land John Mwaura Waweru went to court on February 15, 2018, seeking to stop the burial.

He also sought an eviction order against the family, arguing he purchased the land in a legal process through a public auction which the previous owner had unsuccessfully challenged in court.

Nyeri Senior Principal Magistrate Bernard Ochoi, in his judgement dated January 22, 2019, said the plaintiff seems to have followed due process in obtaining the title deed hence had absolute right of ownership.

“Waweru presented evidence showing that after he purchased the land, he went to the land control board and sought consent to transfer it from the previous owner to his name, which consent was granted,” Ochoi observed.

The plaintiff, he noted, would suffer damages if the family was not restrained from burying Ngunjiri in the disputed land.

On the eviction order, Ochoi said the order dated November 22, 2013, by Resident Magistrate Catherine Wekesa had never been set aside.

“There is no need to issue the orders again as the same has never been set aside,” Ochoi added.

Wamuyu and his children Kabugi, Ngunjiri, Karigi, Munga and Chege have since appealed and the matter is awaiting direction.

According to Wamuyu, the court battle started with an alleged gentleman’s agreement between her husband who proposed to sell a piece of land measuring a 100 metres by 50 metres to Peter Nyuguto.

In between, she claimed, a dispute arose among them on the cost of the property that eventually ended in court.

Unfortunately, Ngunjiri could not afford to raise the amount and subsequently the court directed his land be sold through an auction by Hippo Auctioneers General Merchants.

After the auction, Ngunjiri lost the property to Waweru who bought it at Sh1.4 million.

On November 13, 2013, the then Senior Resident Magistrate Catherine Wekesa, in her orders, confirmed the sale of LR No Muhito/Gaturia by public auction to Waweru.

She ordered a certificate of sale be issued to Waweru and all cautions and restrictions placed on the land removed to facilitate transfer to the purchaser.

Further, Ngunjiri and his agents and servants were to be removed and possession granted to the new owner.

Nyeri Land registrar was also ordered to dispense with the production of the original title deed.

The executive officer of the court was directed to sign all the necessary documents to facilitate the transfer.

Dissatisfied with the decision, Ngunjiri appealed for stay orders at the High Court and was dealt yet another blow when his application was dismissed.

His appeal was premised on the ground that the suit property was wrongly sold in execution of a decree because no succession cause had been filed over the estate of Ngima Muthuma, who was the registered owner since 1959.

He claimed Ngima died in 1975 and could not sanction any lawful transfers hence the purported sale was a nullity and incapable of taking effect.

In dismissing the application, Justice Lucy Waithaka said the appeal lacked merit and that the advocate on record for Ngunjiri had not complied with the law concerning change of advocates after the judgment.

“I find and hold that the assertion by the appellant counsel that he was allowed to come on record by the lower court on behalf of the appellant is a lie and a breach of advocate’s duty to court,” Waithaka observed.

She also ordered Ngunjiri to meet the cost of the appeal.

In dismissing appeal, Justice GBM Kariuki, Fatuma Sichale and Ole Kantai said they found no basis of interfering with verdict of the High Court since the petition was bereft of merit.

“The official search showed the property was registered in the appellant’s name from July 19, 2007.  There is not a shred of evidence to show Ngima had equitable or other interest,” they ruled.

Ngunjiri died on February 10, 2018, before he and his family could be evicted. His body was found along Mukurweini-Nyeri road.