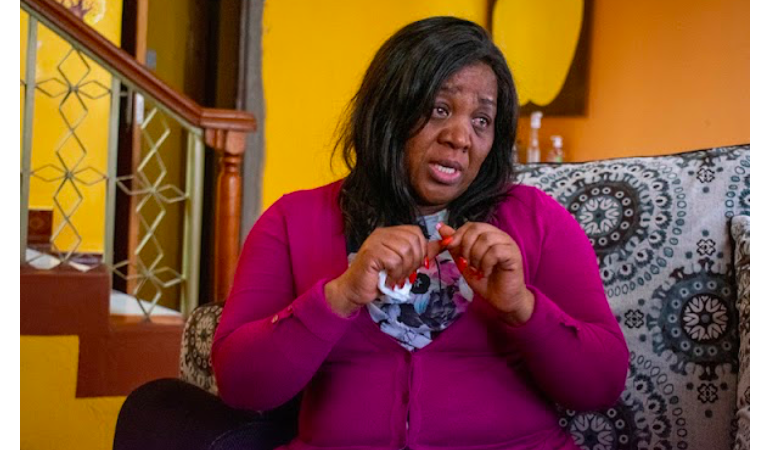 The mother of two of the lynched Kitengela Four made a bonfire of their belongings, hoping the flames would cauterise her grief and anger.

Lucy Wanjiru even burnt drawings by her artist and animation creator son, Fred, at gates of her maisonette in Syokimau, Machakos county. And records and papers belonging to her DJ and mechanic son Victor also went up in smoke.

“Burning my Fred and Victor’s belongings didn’t kill the pain, only justice can do that,” Lucy told the Star in an interview. She flew back from the UK when she heard about their deaths on Sunday, August 7.

The four were bludgeoned to death and pierced with spears because residents thought they were cattle rustlers. Their documents and three motorcycles were burnt.

One man has been arrested and police are investigating reports hundreds of men swore an oath not to reveal the names of the other killers and accomplices.

The bodies were found two days later, with spears stabbed into their heads. Many bones were broken. An autopsy report said they had been tortured for at least two hours before the murder.

The victims were brothers Fred Mureithi, 30, and DJ and mechanic Victor Mwangi, 25, and cousins Mike George, 29, and Nicholas Musa, 28.

Both Fred and Victor ran businesses.

One man has been arrested.

Victor was celebrating his birthday on the day he died. He and his cousins had gone to celebrate and after the party they were joined by Fred. Neighbours had seen Fred in the morning he was murdered.

When the Star visited the family, only mother Lucy, her younger brother Joseph Macharia and sister Purity Wacuka were there.

Two German Shepherds and a Rottweiler peeped through a window as though hoping to see someone they know. They were Victor’s pets.

“Their mother just won’t stop crying. Whenever she sees anything that triggers their memories, she cries uncontrollably,” Macharia said.

Fred had many drawings of the three of them together, mother and sons, as well as photos. Despite protests, his mother burnt them all.

“You cannot kill the memories of my sons if you burn down this entire house. You cannot stop my pain, the pain of a mother, losing her only children in such a brutal manner,” she cried.

“Only justice can calm me. Only justice will make me feel better,” she said staring ahead in anger.

She had last talked to Fred on Friday night, reminding him of their appointment with a pastor on Tuesday.

“Fred told me he would not be attending Victor’s party because he was held up. Victor did not have a phone so we spoke on his brother’s,” she recalled.

After failing to get them on the phone, the worried mother who does business in the UK, called their friends and neighbours asking them to locate her only children.

“A neighbour called me two days later crying. He told me, ‘Freddie and Victor have been murdered’,” she said.

Lucy said she had lived with her two sons after leaving a violent marriage.

She left the country in 2018 to start over after her business was auctioned. She had lost everything and was falling into depression.

“It was a difficult decision but we all sat together and agreed leaving was the best thing for me,” she said.

Wanjiru said she convinced Fred, who had already moved out of  and was living in Zimmerman, Nairobi, to move back and live with his brother Victor in Syokimau.

For almost a year, Wanjiru was in and out of the hospital in the UK where she was visiting a relative.

“I was battling depression and high blood pressure and could not support my sons, but they had skills that enabled them to make  living,” she said.

Lucy said they spoke every day and would often have family Zoom meetings to discuss their lives and plan for the future. The last meeting, she said, was on Thurs, three days before they were killed.

“During the meeting, I asked Fred why his girlfriend had not moved in and he said they were still discussing it,” she said.

“Victor said he had a girlfriend who resembled me. He was excited about introducing us as he joked about marrying a girl who takes after his mother,” she said.

The sons told Lucy hey had found and read her secret diary, which included painful details of her marriage, which failed.

“I had documented everything in my life from as early as the 1990s. Some embarrassing things like why I left my marriage,” she said.

The boys sympathised, said she should have told them and promised to protect her.

Lucy said they planned to put up a shop next to the rental houses they were building. They would sell spare vehicle parts and use the back for motorcycle repair. Victor was good at that.

The shop, like all her businesses before, would be named, Lusons, short for Lucy and Sons.

“Victor was in charge of building the rental houses and joked  their children would have a rich grandma.”

Fred and Victor, their mother said, were opposites but always protected each other. Fred was reserved and quiet, Victor was extroverted and loved to party.

“Growing up, when he made me angry, Victor had a way of turning things around immediately and making me laugh. Fred, however, was always ready to say ‘sorry’, detesting confrontations. He was naturally humble,” their mother said.

“I believe Fred had gone to protect his brother since he had not attended the party. I do not buy that cattle theft story. My boys wouldn’t know what to do with a goat, let alone a cow,” she said.

“Fred was born an artist and could draw a portrait of you in five minutes,” his mother said.

He studied animation and graphic design at theNairobi Institute of Technology and later at the Makini School.

Fred also created the Santai cartoon aired on Kameme TV. He later opened a shop where he worked until his death.

“Fred was so determined, when he set out to do something, he achieved it because he was so focused,” his mother said.

Victor studied sound engineering at an institute in Westlands.

He worked as a DJ, mostly with Kikuyu Benga musician Mike Rua who was also their neighbour.

Victor would hire out his sound system during the week, focus on modifying motorbikes and selling them.

“He bought old broken bikes and repaired them. He would also modify the racing bikes they were riding when they were killed,” Lucy said.

He was the one who would fix the electrical wiring and was in charge of construction.

“He handled all the money for construction and always found ways of saving. He didn’t need to steal cows for money,” Lucy said.

“Initially, he had 15 dogs. After I went broke, I forced him to sell them and he was left with the three,” the mother said.

The family demands justice as only one person has been arrested 17 days after the murders.

“One person could not have killed four grown men. The police are not giving us any update,” Wakula, the boys’ aunt, said.

Mwongera said their motorbikes had also been burnt and had no number plates. Local people suspected them to be rustlers,” he said.

Detectives are investigating a report 500 men in Kitengela took an oath to keep secret the names of those in the lynch mob.

The meeting was said to have been attended by elders who threatened to curse anyone who disclosed killers’ names to the police.